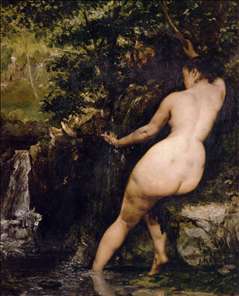 The Spring, by Gustave Courbet, is among the works from the Baron Mór Lipót Herzog Collection confiscated by the Nazi-collaborating Hungarian government

Heirs to the Herzog Collection, the largest private art collection in Hungary prior to World War II, filed suit in the United States District Court for the District of Columbia late yesterday to seek the return of artworks illegally held by Hungary since the Holocaust. The heirs are also demanding a full and transparent inventory of looted art from the Herzog Collection held by Hungary, marking the first time a request of this nature has ever been made in an art restitution lawsuit.

The lawsuit seeks the return of over 40 artworks with a combined value of over $100 million, including masterworks by El Greco, Francisco de Zurbarán, and Lucas Cranach the Elder. The works come from the collection of Baron Mór Lipót Herzog, a passionate Jewish art collector, and the case is regarded by experts as the world’s largest unresolved Holocaust art claim. Hungary, a WWII-era ally of Nazi Germany that organized the dispossession, seizure, deportation, and eventual deaths of more than 500,000 Hungarian Jews, has held the artworks since the genocide of its Jewish population, despite years of negotiations and international appeals for the collection’s return from multiple U.S. Senators.

Before his death in 1934, Baron Mór Lipót Herzog amassed approximately 2,500 paintings, sculptures, and other artworks in what was one of the finest collections of art in all of Europe. Among the artworks at issue in this case are:

The Agony in the Garden, an oil-on-canvas masterwork that was one of six El Greco paintings in the former Herzog Collection; The Portrait of Don Balthasar Carlos, by Alonso Cano, the Spanish painter and sculptor known as “the Michelangelo of Spain”; The Spring, by Gustave Courbet, the innovative French painter who lead the Realist movement in 19th-Century France; and Portrait of a Woman (Lady with a Marguerite (Daisy), by Camille Corot, the 19th-Century French landscape painter of whom the impressionist master Claude Monet said, “We are nothing compared to him, nothing.”

The complaint filed yesterday sets out the remarkable and disturbing facts of the case, including:

At its peak, the Herzog Collection included approximately 2,500 works of art, including paintings by El Greco, Velázquez, Renoir, Corot, and Monet. After the widow of Baron Mór Lipót Herzog died in 1940, the collection was passed to her three children: Erzsébet, István, and András. Hungary sent András to a forced labor camp in 1942; he died on the Russian front in 1943. His daughters, who fled Hungary after their father’s deportation and death, are plaintiffs in this suit. Hungary attempted to send István to the infamous Auschwitz camp, though he escaped to a safe house. The heirs of István and Erzsébet have assigned their interest in the Herzog Collection to David de Csepel, the lead plaintiff. The Hungarian government worked hand-in-hand with the infamous Nazi SS commander Adolf Eichmann in organizing large-scale deportations of Hungarian Jews to German death camps. Between mid-May and July 1944, Hungarian authorities deported over 430,000 Jews, comprising more than 50% of the Hungarian Jewish population. In May 1944, the Hungarian Ministry of the Interior issued a decree requiring Jews to register all art objects in their possession. The Herzog family attempted to save their artworks from damage and confiscation by hiding the bulk of it in the cellar of one of the family’s factories at Budafok. Dénes Csánky, director of the Museum of Fine Arts, assisted in packing and hiding the artworks. Despite their efforts to prevent the looting of the art, the Hungarian government and their Nazi collaborators discovered the hiding place (Csánky inventoried the treasures as they emerged). The seized artworks were taken to Adolf Eichmann, who selected many of the best pieces of the collection, first displaying his “trophies” and then shipping them to Germany. The remainder was handed over by the Hungarian government to the Museum of Fine Arts for safekeeping. Under the 1947 Treaty of Peace between Hungary and the Allies, ownership rights to the Herzog Collection remained with the Herzog heirs. The artworks that are the subject of this lawsuit are among the main attractions at Hungary’s Museum of Fine Arts and the Hungarian National Galley. One guidebook to the Museum of Fine Arts includes four art works from the collection, including El Greco’s The Agony in the Garden, while another guidebook includes two artworks from the collection. The museums display works from the Herzog Collection prominently and have included tags identifying them as being “from the Herzog Collection.” The museums have promoted and distributed books, including Treasures of Venice: Paintings from the Museum of Fine Arts, Budapest, that include works from the Herzog Collection. The Budapest University of Technology and Economics and the Museum of Applied Arts in Budapest also possess artworks from the Herzog Collection. At the 1998 Washington Conference on Holocaust-Era Assets, an international conference on the persistent issues surrounding Nazi-looted art, the Hungarian government pledged that it was “fully committed to the restitution or compensation of Holocaust victims concerning cultural assets. For managing this complex task . . . a state commissioner will be designated.” Twelve years later, no commissioner has been appointed.

The following are comments from the Herzog heirs, their counsel, and experts on Holocaust-era art recovery:

“In the area of Holocaust restitution, the government of Hungary has been a particularly bad actor. Hungary attempts to portray itself as a nation worthy of our respect and investment, while refusing to comply with its basic obligations under international law.” “In contrast to Hungary, Germany returned artworks from the Herzog Collection to the Herzog heirs this spring without need for legal action. We had no choice but to bring the Herzog family’s claim before a U.S. court.”

Martha Nierenberg, the daughter of Erzsébet (Herzog) Weiss de Csepel, who fled the Hungarian Holocaust with her family in 1944 and has long championed efforts for the return of the collection, stated:

“Hungary knows what is the right thing to do. Hungary chooses instead to do the wrong thing. It is sad that the Hungarian government would bring shame on its people by behaving this way, so long after the rest of the world has recognized the horror of the Holocaust.” “I hope this lawsuit will restore what was lost to my family and has been held hostage by the government of Hungary for more than half a century.”

“We bring this lawsuit in remembrance of our ancestors who lost their homes and lives in the Holocaust. We are only requesting the property that was taken from them, our remaining connection to a proud family history. That can’t be too much to ask.” “We will continue the struggle of previous generations and fight for what rightfully belongs to our family.”

Charles Goldstein, counsel to the Commission for Art Recovery, a not-for-profit organization that works to ensure that governments comply with the Washington Principles for Holocaust-era looted art, stated:

“Repeatedly failing to live up to its treaty obligations and commitments to the Washington Principles and Terezín Declaration, Hungary must acknowledge its actions during the Holocaust and return the Herzog art.” “Hungary’s vulgarity and recklessness in refusing to return the art that it has illegally held is unparalleled. The country’s inaction is a stain on its people and all of Europe.”

“Baron Mór Lipót Herzog’s art collection was the greatest in pre-war Hungary. Among his most important Old Master paintings were several major El Grecos (the magnificent “Agony in the Garden” and the powerful “Saint Andrew”), a wonderful early Lucas Cranach the Elder (“The Annunciation to Saint Joachim”), and a great rarity, a painting by the father of Raphael, Giovanni Santi. He also loved and collected more modern works by leading French painters -- Corot, Courbet, Monet, and Renoir.” “Herzog had museum-quality works of art, and he combined great paintings, renaissance furniture and sculpture, and precious objects to create an atmosphere to delight any connoisseur. The Herzog Collection was comparable to the best house museums we know today -- The Frick Collection in New York and The Wallace Collection in London.”

“The Hungarian government’s refusal to return Holocaust-era looted art is shameful. The government should have negotiated and settled with the heirs a long time ago. Hungary cannot build its national art collection through court battles to retain art that does not belong to its museums. I hope it is not too late to reach an amicable settlement.”

Additional materials, including a copy of the publicly filed complaint and photos of the artwork, are available online at http://www.hungarylootedart.com/.

Books: One of the most Famous Comic Strips of All Time was Created by a Nazi Collaborator