Sigurdur Ingi Thordarson admitted to an Icelandic newspaper that he lied about being asked to hack computers in order to get immunity and misrepresented his ties with the Wikileaks founder.

New Delhi:The United States’ Department of Justice’s case against Wikileaks founder Julian Assange took a serious hit last week after a key witness admitted that he fabricated accusations in order to get immunity. Though these revelations were made public by an Icelandic newspaper on June 26, the mainstream media in the US has largely chosen to ignore them.

According to the bi-weeklyStundin, the witness, Sigurdur Ingi Thordarson, “has a documented history with sociopathy and has received several convictions for sexual abuse of minors and wide-ranging financial fraud”. He was recruited by US authorities in order to build a case against Assange, and misled them into believing he was a close associate of the Wikileaks founder. In reality, however, he had only “volunteered on a limited basis to raise money for Wikileaks in 2010 but was found to have used that opportunity to embezzle more than $50,000 from the organisation”, the Icelandic newspaper reports.

The US is currently seeking Assange’s extradition from the UK. If it succeeds, Assange could face up to 175 years in jail because of the charges filed against him. But now, with Thordason accepting that he fabricated his testimony, the veracity of the indictment submitted by American authorities in the UK has come under serious question. ,,, 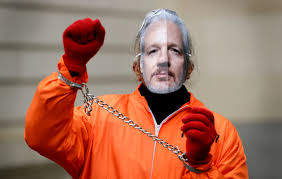 Stunning revelations have emerged overseas about the reckless and duplicitous methods used by US law enforcement against Julian Assange. But in the US, the story has been subject to an almost total media blackout.

Our new issue, “The Working Class,” is out in print and online soon. Subscribe today to get it.

Acouple weeks back, the US government’s attempt to prosecute Julian Assange for publishing classified material was dealt a major blow. You probably didn’t even hear about it.

Two weeks ago, the Icelandic newspaper Stundin published a bombshell report revealing that Sigurdur Thordarson, a former WikiLeaks volunteer from Iceland whose testimony was key to the US case against Assange, admitted to fabricating accusations against Assange. Those accusations had been featured in the US indictment against the organization’s founder, and they were cited by the British judge who narrowly ruled against Assange’s extradition at the start of this year.

The crux of the situation is this: the indictment charges, among other things, that Assange instructed Thordarson “to commit computer intrusions” and secretly record high-ranking Icelandic officials, including members of parliament; that they tried to decrypt a “stolen” file from an Icelandic bank; that Assange tried to use “the unauthorized access given to him by a source” to make use of a government website that tracked police vehicles; and that he had ordered and encouraged Thordarson to set up a relationship with a hacking group, who would hack and illegally obtain documents to pass on to WikiLeaks. All of these claims, Thordarson has now admitted to Stundin, are either highly misleading or outright false, the paper reports.

But it gets much worse. Thordarson is a clinically diagnosed sociopath with a history of criminal activity, including stealing documents and embezzling funds from WikiLeaks itself, which he did shortly before contacting the FBI offering to be an informant on the organization. While he was collaborating with the FBI, Thordarson was racking up an impressive rap sheet, featuring fraud, forgeries, and serious sexual misconduct involving underage boys, landing him in prison for a time.

This didn’t stop the Trump administration, with its bias toward the national security state and hostility to press freedoms, from jumping at the chance to make an immunity deal with Thordarson in 2019, made in writing and viewed by Stundin.

According to the newspaper, in exchange for helping the US government build a case that Assange was a criminal rather than a news publisher worthy of First Amendment protections, the Trump Justice Department guaranteed Thordarson both immunity from prosecution over any of his law-breaking that they happened to know about, and that they wouldn’t share information with Icelandic or any other authorities about his criminal activities. As a result, states the report, Thordarson “started to fleece individuals and companies on a grander scale than ever,” including forging his lawyer’s signature for a fraudulent real estate scheme, criminal activity that was going on right up to the day the report was published.

It’s hard to know where to begin here. For one, it’s a vivid illustration of just how sordid Washington’s yearslong pursuit of Assange has been. To punish Assange for embarrassing the US government, successive administrations not only got in bed with a criminal, they effectively facilitated his crimes, which included forcing and tricking boys into sex. The fact that accusations of sexual misconduct against Assange proved central to the case for his extradition to the United States adds an extra layer of hypocrisy.

That’s far from the only one, though. As Stundin reports, when the FBI first tried to use Thordarson as an informant, under Barack Obama, they “took material he had gathered, including data he had stolen from WikiLeaks employees and even planned to send him to England with a wire.” In other words, they took stolen documents and planned to secretly record a group of people, the very things the US Justice Department has (in the latter case, falsely) accused Assange of doing while charging that it made him a vile criminal.

It’s abundantly clear, from this report alone, that at no point in this saga did Washington have a genuine and principled opposition to any of the transgressions involved here, from hacking and stealing secrets to general criminality. Rather, it was all about punishing Assange for exposing US war crimes and the backroom dealings of the powerful, sending a message to any other whistleblowers or leakers who would try to do the same and, as a nice bonus, maybe scaring journalists and press outlets into thinking twice before reporting on such information.

All of this has become particularly relevant this week, with the UK courts agreeing to hear the US government’s appeal of the rejection of Assange’s extradition, as reported by Shadowproof. Happily piggybacking on Donald Trump’s seedy deal with Thordarson, the Biden administration has now offered several “assurances” in an effort to reverse the January decision, including that they would allow Assange to apply for transfer to a prison in his home country of Australia to serve out his time.

With Thordarson recanting on his allegations, however, this puts the Biden administration in a bit of an awkward position. Secretary of state Antony Blinken has previously acknowledged the danger to press freedoms from prosecuting Assange, noting quite accurately in 2017 that “if he is simply publishing information that happened to come his way . . . that doesn’t make him a whole heck of a lot different, perhaps, than the New York Times.” He had then added the caveat that “if, on the other hand, he is actually instructing people to try to steal classified information that he can publish, that might be different.”

No one should be under any illusion that Blinken or Joe Biden is actually concerned about press freedoms, of course, as the administration’s actions in the first six months in office plainly show — just with assuring liberal voters this presidency is different from Trump’s. But that’s a lot harder to do when a key part of the case that Assange wasn’t merely a publisher of official secrets, but a criminal directing global hacking operations, turns out to have been fabricated.

But there’s always a solution. As organizations like FAIR and Media Lens have documented, the establishment press — which, since the campaign period, have adopted a tone of unabashed cheerleading toward the new president that has been measurably more favorable than for Trump — has decided to simply ignore the story.

Nearly two weeks after the Stundin report came out, the only mainstream news outlet that’s so much as acknowledged its existence is the Washington Post, which on Thursday buried a brief reference to it halfway down a story on Biden’s magnanimous offer to let Assange rot in an Australian prison, playing down the story’s significance to the case. Of course, last year, before Thordarson had been discredited, the paper had devoted nearly eight hundred words to his falsified allegations when they were included in the Justice Department’s updated indictment, arguing that it “adds evidence to the government’s assertions that Assange is not a publisher or journalist but a hacker” and that it “seem[s] to strengthen the prosecution’s case.”

We will see how long Biden continues to pursue his extradition and whether it will prove successful, particularly in light of these recent revelations. But one thing’s for sure: however you might feel about his various alleged wrongdoings, it is hard to argue that Assange, who turned fifty last week in solitary confinement, hasn’t been sufficiently punished already.

Assange spent seven years locked in an embassy, unable to set foot outside, a far more extreme version of the pandemic lockdowns we were all forced to briefly endure and which sent rates of mental health problems soaring. Following that, since April 2019, Assange has been held in near-total isolation, with the UN special rapporteur on torture declaring that his “rights have been severely violated for more than a decade.” The prolonged solitary confinement left Assange unable to “think properly” and suicidal, ironically the chief reason given for denying his extradition.

This level of suffering should be enough to consider the matter closed, and the message sent to any other potential leaker of state secrets. The fact that this administration is continuing this wretched crusade speaks to the carceral sadism that has long been a bipartisan project in Washington, and which Joe Biden made his area of expertise for decades. Let’s hope it fails, for the sake of the very “decency” the establishment press loves to wax poetic about when it talks about this president.

Branko Marcetic is a Jacobin staff writer and the author of Yesterday's Man: The Case Against Joe Biden. He lives in Toronto, Canada.