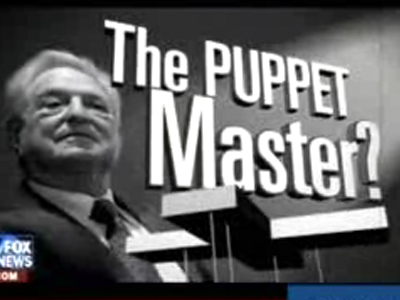 That would be Republican lobbyist Randy Scheunemann, Palin's foreign policy adviser and a member of her small inner circle. He runs a Washington, D.C., consulting firm called Orion Strategies. Scheunemann and a partner have since 2003 been paid over $150,000 by one of Soros' organizations for lobbying work, according to federal disclosure forms reviewed by Salon. The lobbying, which has continued to the present, centers on legislation involving sanctions and democracy promotion in Burma.

Scheunemann isn't a new hire for Palin. He's been invested in team "mama grizzly" since the McCain campaign, when he, as chief foreign policy adviser to the GOP presidential candidate, helped a then-fledgling Alaska Governor make a name for herself on the national scene.

Since then, however, he's transitioned more heavily over to the Palin camp, Salon reports, even accompanying the former vice-presidential candidate on a trip to Hong Kong in 2009. For his efforts, Scheunemann's group, Orion Strategies, reportedly received a $30,000 check from SarahPAC during the second quarter of 2010, according to Salon.

For the full story behind the Scheunemann-Palin-Soros web, check out the rest of Salon's report.

Gee, George Soros can destroy nations’ economies with the flip of a switch (like Britain, Czechoslovakia, Thailand and Indonesia)?
Honestly? I don’t know how to connect Soros the Breaker of Nations with Soros the Angel of Liberal Causes, and yet, there’s plenty of evidence to existence to both of these creatures named George Soros.
btw, Randy Scheunemann was pushing John McCain towards war with Russia after Georgia invaded So. Ossetia in Aug. 2008. Was he following Soros’ lead then, too? I’ll be checking AntiFasEncyc for updates!