KBR Inside the World of War Profiteers 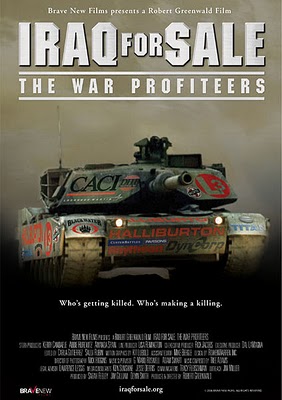 From prostitutes to Super bowl tickets, a federal probe reveals how contractors in Iraq cheated the U.S.

The graft continued well beyond the 2004 congressional hearings that first called attention to it. And the massive fraud endangered the health of American soldiers even as it lined contractors' pockets, records show.

Federal prosecutors in Rock Island have indicted four former supervisors from KBR, the giant defense firm that holds the contract, along with a decorated Army officer and five executives from KBR subcontractors based in the U.S. or the Middle East. Those defendants, along with two other KBR employees who have pleaded guilty in Virginia, account for a third of the 36 people indicted to date on Iraq war-contract crimes, Justice Department records show.

On Wednesday, a federal judge in Rock Island sentenced the Army official, Chief Warrant Officer Peleti "Pete" Peleti Jr., to 28 months in prison for taking bribes. One Middle Eastern subcontractor treated him to a trip to the 2006 Super Bowl, a defense investigator said.

Prosecutors would not confirm or deny ongoing grand jury activity. But court records identify a dozen FBI, IRS and military investigative agents who have been assigned to the case. Interviews as well as testimony at the sentencing for Peleti, who has cooperated with authorities, suggest an active probe.

Rock Island serves as a center for the probe of war profiteering because Army brass at the arsenal here administer KBR's so-called LOGCAP III contract to feed, shelter and support U.S. soldiers, and to help restore Iraq's oil infrastructure.

In one case, a freight-shipping subcontractor confessed to giving $25,000 in illegal gratuities to five unnamed KBR employees "to build relationships to get additional business," according to the man's December 2007 statement to a federal judge in the Rock Island court. Separately, Peleti named five military colleagues who allegedly accepted bribes. Prosecutors also have identified three senior KBR executives who allegedly approved inflated bids. None of those 13 people has been charged.

A common thread runs through these cases and other KBR scandals in Iraq, from allegations the firm failed to protect employees sexually assaulted by co-workers to findings that it charged $45 per can of soda: The Pentagon has outsourced crucial troop support jobs while slashing the number of government contract watchdogs.

Last week, the Army pledged to add 1,400 positions to its contracting command. But even those embroiled in the frauds acknowledge the impact of so much war privatization.

"I think we downsized past the point of general competency," said subcontractor Christopher Cahill, who for a decade prepared military supply depots under LOGCAP. Now serving 30 months in federal prison for fraud, Cahill added: "The point of a standing army is to have them equipped."

KBR, a former subsidiary of Halliburton Co., says it has been paid $28 billion under LOGCAP III. The firm says it quickly reports all instances of suspected fraud and has repaid the Defense Department more than $1 million for questionable invoices.

But a wiretapped transcript recently released in Rock Island underscores the brazen nature of the exceptions.

In October 2005, with federal agents tailing them, three war contractors slipped through London's posh Cumberland hotel before meeting in a quiet lounge. For the rest of that afternoon, the men sipped cognac and whiskey and discussed the bribes that had greased contracts to supply U.S. troops in Iraq.

Former KBR procurement manager Stephen Seamans, who was wearing a wire strapped on by a Rock Island agent, wondered aloud whether to return $65,000 in kickbacks he got from his two companions, executives from the Saudi conglomerate Tamimi Global Co.

One of the men, Tamimi operations director Shabbir Khan, urged him to hide the money by concocting phony business records.

"Just do the paperwork," Khan said.

In October 2002, five months before the U.S.-led invasion of Iraq, Khan threw a birthday party for Seamans at a Tamimi "party house" near the Kuwait base known as Camp Arifjan. Khan "provided Seamans with a prostitute as a present," Rock Island prosecutors wrote in court papers. Driving Seamans back to his quarters, Khan offered kickbacks that would total $130,000.

In April 2003, as American troops poured into Iraq, Seamans gave Khan inside information that enabled Tamimi to secure a $2 million KBR subcontract to establish a mess hall at a Baghdad palace. Seamans submitted change orders that inflated that subcontract to $7.4 million.

The Army LOGCAP contract required KBR to medically screen the thousands of kitchen workers that subcontractors like Tamimi imported from impoverished villages in Nepal, Pakistan, India and Bangladesh.

KBR retested those 550 workers at a Kuwait City clinic and found 172 positive for exposure to hepatitis A, Lang told the judge. Khan tried to suppress those findings, warning the clinic director that Tamimi would do no more business with his medical office if he "told KBR about these results," Lang said in court. The infectious virus can cause fatigue and other symptoms that arise weeks after contact.

Retesting of the 172 found that none had contagious hepatitis A, Lang said, and Khan's attorneys said in court that no soldiers caught diseases from the workers or from meals they prepared. It remains unclear if that is because the workers were treated or because they did not remain infectious after the onset of symptoms.

"That was an ongoing problem," Robinson said. "When the military asked for paperwork, it was spotty." KBR was forced to begin vaccinating the employees at their work sites, he added.

Tamimi and its U.S. lawyers did not respond to requests for comment. The company has said it is cooperating with federal authorities.

By July 2005, Tamimi had secured some 30 KBR troop feeding subcontracts worth $793.5 million, records show. Khan continued to negotiate Iraq war subcontracts for Tamimi until shortly before he was arrested in Rock Island in March 2006.

He is now serving a 51-month prison sentence for lying to federal agents about the kickbacks he wired to Seamans, who pleaded guilty and served a year and a day in prison. Both declined to comment.

Seamans, a 46-year-old Air Force veteran, once taught ethics to junior KBR employees. At his December 2006 sentencing hearing, he expressed remorse for taking the kickbacks, telling the judge: "It is not the way that Americans do business."

It was another repentant LOGCAP veteran standing before a Rock Island judge on Wednesday. Peleti, formerly the military's top food service adviser for the Middle East, wept as he admitted taking bribes from Tamimi and three other subcontractors between 2003 and early 2006.

Ribbons and badges glittered across Peleti's pressed green Army shirt. "I stand here before you today to convey my remorse and sincere regret," he said, then broke down.

One subcontractor, Public Warehousing Co., took Peleti and another top Army official to the Super Bowl, a defense investigator said in court Wednesday. The firm has denied wrongdoing. Khan also bribed Peleti to influence LOGCAP contracts with cash. Peleti was arrested in 2006 while re-entering the U.S. at Dover Air Force Base with a duffel bag stuffed with watches and jewelry as well as about $40,000 concealed in his clothing.

While prosecutors documented kickbacks in only the first two of Tamimi's mess hall subcontracts, they contend that the tone was set to corrupt the system.

Auditors in the basement

Military auditors say they closely monitor the layers of KBR subcontractors who actually perform most of the LOGCAP work, stationing teams in Iraq. But one Rock Island search warrant said auditors working back in the U.S. could manage only limited reviews of the cascade of deals.

In the basement of one of KBR's Houston office buildings, a 25-member team from the Defense Contract Audit Agency had "no communications" with "personnel on the ground," so they could not confirm whether goods and services actually were delivered, the search warrant application said.

In the absence of oversight, some Middle Eastern businessmen would offer "Rolex watches, leather jackets, prostitutes, and the KBR guys weren't shy about bragging about the fact that they were being treated to all that stuff," said Paul Morrell, whose firm The Event Source ran several mess halls as a KBR subcontractor.

Such questionable relationships continued long after early procurement managers like Seamans had been rooted out. Early subcontractors such as Tamimi became almost indispensable in part by outfitting Army cafeterias with expensive power generators and refrigeration systems, records and interviews show.

"If you ever gave Tamimi a hard time, you'd get a call," former KBR subcontract manager Harry DeWolf told the Tribune.

When subcontracts came up for renegotiation, DeWolf said, companies like Tamimi "would say, 'Fine, we're going to pull out all of our people and equipment.' They really had KBR and the government over the barrel."

Complicating the investigation of war-contract crimes, the government of Kuwait has denied a U.S. request to extradite two Middle Eastern businessmen accused of LOGCAP fraud. The country's ambassador last year sent letters to the Justice Department asking the U.S. to drop its case against one of them, arguing that international agreements forbid U.S. prosecution of Kuwaiti residents for crimes allegedly committed on Kuwaiti soil. Prosecutors disagree, but a judge is considering Kuwait's assertion.

In response to one subpoena, the firm gave agents about 2,760 of Mazon's computer files but withheld 398 others, saying they were covered by attorney-client privilege or other protections.

Federal prosecutors say they have given KBR no special treatment and that the company has legal rights afforded to all firms whose employees have been charged with wrongdoing. "We did withhold some documents as being privileged," a KBR spokeswoman wrote, but added that the company has provided statements and grand jury testimony.

Mazon has pleaded not guilty to charges that he inflated a fuel contract. His attorneys say the fuel subcontract was accidentally inflated when figures were converted from U.S. dollars to Kuwaiti dinars then back again. At least 22 KBR troop support subcontracts were inflated through similar errors, Mazon's attorney J. Scott Arthur wrote in papers filed in Rock Island.

KBR attorneys said the company informed federal officials of three similar "double conversions" on other subcontracts. But KBR said it "has not undertaken an exhaustive search of its millions of pages of procurement documents" to determine whether other such errors exist.