” … In 1931, public comments about Fascism and Italian dictator Benito Mussolini led to a premature retirement to his Goshen Road home in Newtown Square. Butler ran for Senate in 1932, where his strong support for veterans’ rights made him unpopular with the establishment and cost him the election. He wrote War is a Racket in 1933 … “ 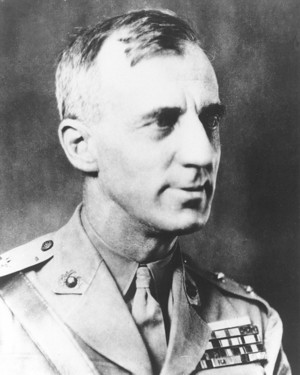 General Butler, the most decorated US Marine in history and fierce anti-fascist

Delaware County Historical Society and the Gen. Smedley Butler Detachment of The Marine Corps League will also host the opening of a new exhibit, “Smedley Butler: USMC-American Hero, DelCo’s Own,” an exhibit honoring the military and civil service of Maj. Gen. Smedley Butler, USMC, the most decorated US Marine in history. at the DCHS Chester Library and Museum Nov. 10 to Jan. 15.

General Butler was decorated with two Medals of Honor for two separate engagements and the Brevet Medal, all for valor above and beyond in the line of duty. He was a Newtown Square resident.

The exhibit is hosted at the Delaware County Historical Society’s Chester Museum and Library 408 Avenue of the States Chester. The curator of the exhibit is Marine Corps League Past Commandant and Broomall resident, Earle Drake.

A general at 37, Butler received the highest decorations for non-combat merit from the US and France during WW1 for his command of the vital supply port of Brest, France. He was also an author, a Senate candidate, the Director of Public Safety in Philadelphia, and a strong voice for democracy in the 1930’s.

Born in West Chester and educated in Haverford, his father was the Congressman for western Delaware County for 31 years. He was commissioned as a USMC 2nd lieutenant 38 days short of his high school graduation in 1898. Butler served in the Philippines during the Spanish American War. During the Boxer Rebellion, he was decorated with a promotion to brevet Captain “for saving a wounded man …under a very severe fire” while relieving the American Legation at Tientsin, China. In 1914, Butler led a Marine landing force in Veracruz Mexico to halt contraband arms shipments. For his leadership, he was decorated with his first Medal of Honor.

In 1915, butler led a daring raid to capture a mountaintop “Caco” bandit fort in Haiti. After finding a gap in the wall, he led his Marines through and engaged in hand-to-hand fighting, killing or capturing all 200 bandits with only one Marine wounded. He was decorated with his second Medal of Honor for this action.

During World War I, he was promoted to general at age 37 and given command of the docks of Brest France, the major entry point for US troops. He quickly turned the disorganized conditions into an efficient operation and was decorated by the Army, Navy and French government.

In 1924, he took leave in order to become the Director of Public Safety in Philadelphia. Aggressive tactics busted over 900 speakeasies and cleaned up police corruption. Command of Marine forces in China in 1927 presaged his promotion to Marine Corps Commandant. But in 1931, public comments about Fascism and Italian dictator Benito Mussolini lead to a premature retirement to his Goshen Road home in Newtown Square. Butler ran for Senate in 1932, where his strong support for veterans’ rights made him unpopular with the establishment and cost him the election.

He wrote War is a Racket in 1933, a strong condemnation of politically-based war profiteering. Later on in 1934, he testified to Congress about a failed plot to take over the US and establish a fascist state. For his remaining years, Butler “denounced war on moral grounds after having been a warrior hero ….vigorously patriotic and nationalistic, decrying imperialism as a disgrace rooted in the greed of a privileged few.” (Hans Schmidt, Maverick Marine, 1987) Butler died in 1940 and was buried in West Chester.

For tickets, directions and information for both the Al Alberts and General Smedley Butler exhibits, call 610-872-0502.

The DCHS Chester Museum and Library is at 408 Avenue of the States in Chester.