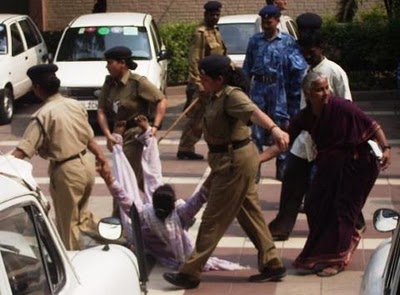 Thailand's media and human rights organisations have petitioned Prime Minister Gen Surayud Chulanont against planned legislation to impose additional internal security measures in addition to the emergency rule and martial law which have already been imposed.

The bill, if passed into law, empowers the army chief who will automatically serve as head of the Internal Security Operations Command (Isoc) to order his assigned officers to carry out searches of any suspect's residence and to impose a ban on people's gathering in public places under any situation that is deemed sensitive to security.

The bill was approved by the cabinet in June, is being scrutinised by the Council of State--the government's legal advisory body.

Angkhana Neelaphaijit, wife of a missing Muslim human rights lawyer, Mr. Somchai, believed to have been kidnapped and killed a few years ago, joined the meeting to say government personnel might abuse their power and even remain unpunished for the sake of such security measures.

The premier said that he was willing to listen to differing point of views to revise the bill to accommodate their concerns.

Gothom Arya, member of the National Legislative Assembly, planned to open a public hearing at Parliament on Monday to discuss the controversial legislation. (TNA)