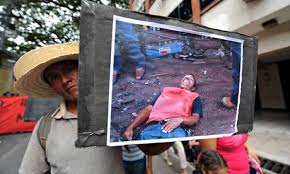 Abby Martin (see video below) reports on the growing number of murders of environmental activist worldwide by corporate and government entities, citing the 908 deaths reported in countries from Brazil to the Philippines. …

Hundreds of Environmental Activists Killed Worldwide Over Past Decade

A report released Tuesday offers a chilling bit of news: working to protect the world’s wildlife and its habitat can make you some ruthless enemies. According to the human rights watchdog group Global Witness, at least 908 environmental activists worldwide were murdered in retaliation for their work between 2002 and 2013.

The report, Deadly Environment, was released Tuesday to commemorate the 25th year since the murder of Brazilian forest activist Chico Mendes by a local rancher who objected to Mendes’ defense of local forests.

The study is sobering, especially with its release in a week in which the U.S. has seen a campaign by armed groups trying to prevent enforcement of environmental protection laws in Nevada.

Despite the week’s news in Nevada, and historic attacks on activists like Karen Silkwood and Judi Bari, it seems to be safer to be an environmental activist in the U.S. than in many other countries, according to Global Witness.

Latin America and Southeast Asia are especially dangerous places for environmental activism, with Mendes’ native Brazil accounting for an unnerving number of the 908 documented murders: 448 Brazilian activists were killed during the 12-year period studied. 109 Honduran activists were killed in the same timeframe, making that country the second most dangerous for environmental activists, with the Philippines third at 67 murders.

Among the 32 other countries Global Witness identifies as posing serious danger to their own environmentalists is Mexico, with 40 documented murders of environmental activists from 2002 to 2013.

With very few exceptions, the murderers tend to operate with impunity — meaning that there is generally little to no effort to apprehend and punish the perpetrators. In some cases the killers turn out to be working with either local militias or other paramilitary groups. In others, the suspects are linked to large corporations whose projects the environmentalists sought to impede. But in the vast majority of murders studied by Global Witness — 737 of them — there is no information whatsoever about the suspects.

And the problem is getting worse, the group reports. 2012 was the worst year to date for killings, with 147 documented murders of environmental activists worldwide, or an average of one enviro killed every two and a half days. 2013’s figures, currently at 95, are expected to rise as more information comes into Global Witness.

A common denominator in the countries with large numbers of environmentalist murders is conflict over land and resources. Brazil is in the process of converting its immense rainforests into cattle ranches and soy plantations, which brings opposition from those seeking to preserve the forests and the wildlife and indigenous cultures the forests support. Honduras’ murders seem to be committed in support of the increasing conversion of that country’s landscape to palm oil plantations, while mining interests are apparently behind much of the violence in the Philippines.

On a global scale, the murders seem to be carried out in the service of extractive industries such as logging, the energy industry, and agribusiness, including ranching. “The number of deaths points to a much greater level of non-lethal violence and intimidation,” adds the group, “which the research did not document but requires urgent and effective action.”

Global Witness reports no retaliation killings of environmental activists in the U.S. between 2002 and 2013. That doesn’t mean American activists have no reason to fear, as that non-lethal violence and intimidation continue to this day in the U.S. We recently covered the retaliation poisoning of a California biologist’s dog, for instance. Over the weekend a staff member of the Center for Biological Diversity, which has been working to force the BLM to remove those now infamous trespass cattle from tortoise habitat in Nevada, found that his address and a Google Street View image of his home had been posted to Twitter by an anti-environmental opponent. The poster urged supporters of the rancher to “contact” the activist.

Such threats are part of a long and distressing tradition of violence, lethal and otherwise, directed at green activists by people working in the service of those who stand to profit from destroying the environment. Aside from the above-mentioned Karen Silkwood and Judi Bari (who was, full disclosure, a friend), consider the Navajo activist Leroy Jackson, found dead by the side of the road days before he was scheduled to testify before Congress on reservation clearcutting. Or Arkansas Greenpeace activist Pat Costner, whose house was burned to the ground in 1991 after years of threats over her opposition to hazardous waste incineration. Or Floridian Stephanie McGuire, who was raped, beaten, and tortured by three men in 1992 who told her they were doing so as retaliation for her opposition to a Proctor and Gamble paper mill dumping effluent into the Fenholloway River. McGuire later said that the men cut her throat, then dumped river water onto the wound while telling her that “now you’ve got something to sue about.”

Global Witness’ report may not cover murders of American environmentalists, but it’s a chilling glimpse into the widespread problem of retaliatory killing of environmentalists. It’s also a reminder of how deadly the consequences of inflamed and violent rhetoric can be.

That reminder’s much needed this week in particular.