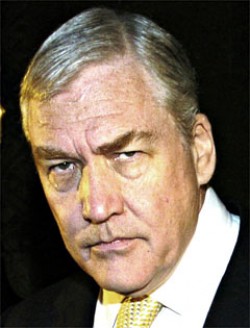 Chicago — Conrad Black has been convicted on four criminal charges, including obstruction and three counts of mail fraud. He was found not guilty on nine other charges. He now faces the prospect of as much as 35 years in jail.

Lord Black sat stone-faced, looking at the jury, as the judge asked each one if this was their verdict.

The most dire decision by the jury: on count 13, the jury judged Conrad Black guilty of obstruction of justice in connection with the removal of 13 boxes of documents from his office at 10 Toronto Street in Toronto. The charge carries a maximum penalty of 20 years in jail and a $250,000 fine.

Lord Black huddled with his family after the verdict was read. Other defendants hugged their lawyers looking grim. Some were close to tears. The judge has left to talk to jurors. She will soon hold a hearing on bail conditions.

Conrad Black has been found guilty on four counts, including obstruction and three counts of mail fraud; the obstruction charge carries a maximum penalty of 20 years in jail and a $250,000 fine. (Reuters)

Andrew Stoltmann, a Chicago securities lawyer, was among the first observers to offer his take on the verdict, and said the guilty verdicts send a clear message that, “corporate CEOs who get caught with their hand in the cookie jar are not above the law.”

Paul Paton, a Queen’s University professor of law specializing in legal ethics and corporate governance, called it a “remarkable” verdict.

“The jury sorted through all the noise, they ignored all the fluff and focused on the critical non compete charges,” he said in an interview. “The fact that they are getting hard time for corporate misconduct signals that these are real charges and real crimes.”

The verdict came today after a three month trial and nearly three years of investigation by prosecutors in Chicago.

Lord Black had vigorously denied the allegations against him, but in the end jurors believed the word of 29 prosecution witnesses.

For lead prosecutor Eric Sussman, the guilty verdict is a huge victory and marks one of the biggest white collar crime convictions in Chicago. Mr. Sussman and his team of Julie Ruder, Jeffrey Cramer and Ed Siskel, had come under intense scrutiny throughout the trial for their tactics.

Many observers had felt the prosecution put on a weak case, noting that in his closing address Mr. Sussman distanced himself from the prosecution’s star witness, David Radler, Lord Black’s former business partner who testified under a plea agreement.

Mr. Radler’s credibility took a beating during the trial. He acknowledged lying repeatedly in the past and came across as confrontational on the witness stand. But jurors clearly looked past Mr. Radler’s flaws and sided with prosecutors that he could not have committed this crime alone.

For Lord Black and his legal team, which includes Toronto lawyer Edward Greenspan, the verdict is a massive defeat. Lord Black had proclaimed for months that the case against him would crumble and he frequently lashed out at the prosecution. As recently as last weekend, Lord Black expressed complete confidence that all of the charges against him would fail. He called the case an “outrage” and said he felt like “a soldier conscripted for a foreign war. You fight till you win, and then you come home.”

Now he will have to cope with what could be several years in jail, a hefty fine and attempts by prosecutors to seize his mansion in Palm Beach, Fla., as well as other personal assets. After the verdicts were read, Lord Black was placed under oath. After stating his full name, he confirmed that his signature was on a piece of paper in which he waived his right to a jury trial for forfeiture. That means the court, or judge, will determine that issue and a hearing is expected soon.

Lord Black is likely to appeal today’s conviction and Judge Amy St. Eve is expected to allow him to remain free on bail while he pursues the appeal.

The criminal case revolved largely around the sale of dozens of Hollinger International Inc. newspapers between 1998 and 2001. Prosecutors maintained that Lord Black and three other former executives pocketed more than $60-million in payments related to non-competition agreements signed as part of those deals. That money, prosecutors stressed, belonged to Hollinger’s shareholders.

Throughout the trial, prosecutors told the jury over and over that Lord Black and the others stole the money and lied to company directors to cover up their scheme. They implored jurors to look beyond a paper trail created by Lord Black and ask themselves why this money was paid to the individuals instead of the company.

“That’s what this case is about,” Ms. Ruder said in her closing argument. “It’s about why. Why was that money paid?”

She told jurors that the buyers of the Hollinger did not want non-competition agreements with Lord Black and the others. Nonetheless, she added, the executives inserted themselves into the agreements and skimmed off some of the payments. “This was just a money grab,” Ms. Ruder said.

Lord Black’s defence focused largely on company records which outlined the transactions in detail. His lawyers argued that the payments were fully disclosed to shareholders and directors. They mocked directors for not reviewing the documents closely and attacked Mr. Radler as a liar who could not be trusted.

But in the end, the jury of nine women and three men rejected those arguments and voted for a conviction.