“The genius of you Americans,” Egyptian strongman Gamal Abdel Nasser once mockingly told a CIA operative, “is that you never made clear-cut stupid moves, only complicated stupid moves.”

The book’s title deliberately echoes the term used by British diplomats and spies to describe their 19th-century strategic rivalry with Russia in Central Asia. Rudyard Kipling later popularized the idea of this “Great Game” in his novel “Kim.”

Wilford appropriates the conceit in detailing the high-spirited, swashbuckling – and largely counterproductive, if not disastrous – actions of a clutch of American spooks who succeeded the British in the region after World War II.

Wilford, author of “The Mighty Wurlitzer,” an account of CIA front organizations, centers his narrative here on a handful of colorful figures.

Most prominent are members of the “triumvirate that would dominate the Agency’s first covert operations in the Middle East.” Two were patrician grandsons of Theodore Roosevelt: Kermit “Kim” Roosevelt and his cousin Archie. The unlikely third musketeer was a not-so-blue-blooded, one-time Alabama jazz musician, Miles Copeland. 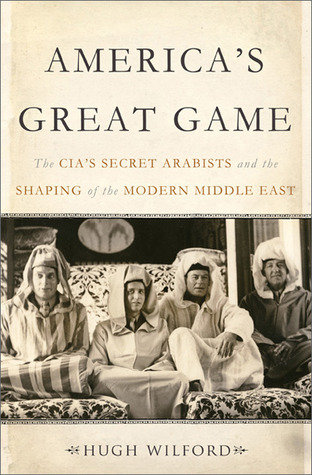 An upper-class public-service ethos, anti-communism, a fascination with Arab culture and a thirst for adventure combined to animate the Roosevelts. Subtract the noblesse oblige, and the same was true of Copeland. All performed intelligence work during World War II. Finding it congenial, they signed on with the newly created Central Intelligence Agency following the war.

Historians still debate the extent of CIA involvement, ranging from mere encouragement to an active role. What’s “painfully clear,” asserts Wilford, is the “legacy of instability, authoritarianism, and anti-Americanism” this episode left in Syria, all harmful to our long-term interests in the region.

While there’s uncertainty surrounding the degree of CIA culpability in the Syrian affair, there is little concerning the 1953 Iranian coup. Kim Roosevelt, acting in concert with his British MI-6 counterparts – and authorized by the highest levels of the U.S. and British governments –orchestrated the overthrow of Iran’s prime minister, who had dared to nationalize his country’s oil industry. In his place, the Anglo-Americans installed a military government under the Shah, whose authoritarian rule ultimately provoked the 1979 Islamic revolution.

Wilford aptly quotes prophetic words spoken to Kipling’s fictional Kim: “Thou hast loosed an Act upon the world, and as a stone thrown into a pool so spread the consequences thou canst not tell how far.” Memories of 1953 still fuel Iranians’ hostile views of the United States. As one scholar puts it, there’s a direct path “from the Great Game to the Great Satan.”

Other bungled plots included trying to turn the nationalist Nasser into a U.S. asset. But even more fascinating than foreign cloak-and-dagger exploits is Wilford’s examination of clandestine CIA attempts to weaken domestic U.S. support for the new state of Israel.

Kim Roosevelt was deeply involved in this anti-Zionist activity. Like other CIA and State Department Arabists, his motivation wasn’t vulgar anti-Semitism, but rather a sincere belief that backing the Jewish state was inimical to U.S. strategic interests. These efforts foundered, too.

As Kim or Archie might have said, Wilford’s book is a ripping good yarn. Moreover, it sounds salutary warnings about Americans’ inflated sense of our ability to influence local developments and the dangers of unintended consequences.