Foreign Policy magazine reports that recently declassified CIA files and interviews with former intelligence officials prove that “the U.S. had firm evidence of Iraqi chemical attacks” when the Pentagon provided intelligence data to the Iraqi regime. Foreign Policy reporters Shane Harris and Matthew M. Aid say the crucial events happened in 1987 and 1988, during the protracted Iran-Iraq War. The U.S. was committed to making sure that Iran did not win. In 1987, U.S. intelligence learned that Iran was planning an offensive that could turn the tide of war in its favor. At that point, the U.S. decided to give Iraq detailed information, including satellite imagery, of Iranian troop deployments. Iraq followed with sarin attacks on the Iranian positions, something that Harris and Aid say the U.S. knew would happen.

MEGHNA CHAKRABARTI, HOST: It’s HERE AND NOW. Well, all eyes right now are on the current crisis in Syria, but let’s turn to recently released files on what the United States knew back in the 1980s about Saddam Hussein’s use of chemical weapons in the Iran-Iraq war. Foreign Policy magazine says recently declassified CIA files and interviews with former intelligence officials prove that, quote, “The U.S. had firm evidence of Iraqi chemical attacks when the Pentagon provided intelligence data to the Iraqi regime during the Iran-Iraq War.”

We’ve got a link to that article at our website, hereandnow.org. Shane Harris is senior writer for Foreign Policy magazine and coauthor of this article. He joins us. Shane, welcome.

SHANE HARRIS: Hi. Thanks for having me.

CHAKRABARTI: So, first of all, just to get the basic facts out, there’s nothing in your reporting that says the U.S. provided chemical weapons to Iraq, but that it might have provided intelligence data to the Iraqi regime as it used chemical weapons against Iranian forces. Is that true?

HARRIS: That’s right. Yeah, there’s no evidence that they supplied any of the actual weapons that were used. It was that we were – the intelligence community was giving the Iraqis location information about the Iranian troops, satellite imagery about their movements and telling them where to strike, and giving that information knowing that the Iraqis would be using chemical weapons in those attacks.

CHAKRABARTI: OK, and so this happened in – or at least the declassified CIA materials that you have say that it happened in 1998 – I’m sorry, 1988.

HARRIS: That’s right. There were four major offensives that the Iraqis launched against the Iranians in 1988 for which the U.S. provided advanced battlefield intelligence, and that chemical strikes were used. But what we also found was going back into recently declassified CIA documents, the CIA knew as early as 1983 – five years before those attacks – that the Iraqis were using chemical weapons against the Iranians. Namely, they were using mustard gas, in those cases.

And that’s significant, because at the time that they were doing that, the Iranians were accusing the Iraqis of using these weapons on the battlefield, but they had no proof. They had nothing that they could take before the U.N. or mount sort of an international case to say look at what Iraq is doing.

But with the records that have been declassified in the past few years now show is that senior leaders – including the director of the CIA – had this information. They knew the location of the strikes. They knew where the Iraqis were manufacturing chemical weapons. They had, actually, a lot of information about what was happening.

CHAKRABARTI: And, in fact, you report that the CIA had a top-secret document from November 1983 that said should the Iraqis continue to intensify their use of chemical weapons – specifically mustard agents, and they would fire them in shells containing Iraqi markings – that Tehran would eventually get a hold of one of these shells and use that in the U.N. as evidence and charge the U.S. with complicity in violating international law. But that never happened.

HARRIS: Yeah, it’s fascinating to see the CIA weighing the risks of staying quiet about this. And as you say, it says very clearly in one of these passages, you know, look. If this gets out that we knew about this, and the Iranians get the evidence they seek, they very well could come back at us and charge that complicity.

And it didn’t really work out that way. I mean, when – it was around 1984 that it became confirmed publicly that the Iraqis were using these weapons, and at the time, the United States condemned it – of course, not acknowledging that they knew that it was happening.

And, you know, these attacks then continued in 1988. What’s also interesting in those documents, too, though, is at the time that the CIA worries about potential accusations of complicity, they also note that the international outrage might not be that strong, and they point out that in previous instances, the Soviet Union had actually used chemical weapons in Afghanistan and effectively, you know, there wasn’t much blowback for that.

So there’s sort of this weighing of the possible consequences that you see playing out in these top-secret documents.

CHAKRABARTI: Well, tell us more about that, because you report that the Reagan administration, at the time – you know, as you’re saying – basically decided that it was better to let these chemical attacks continue by the Iraqis, because they thought it would turn the tide of the Iran-Iraq war.

HARRIS: Yeah, that’s right. There was – it was really the policy of the Reagan administration to do whatever was necessary to ensure that Iraq won its war with Iran. I mean, the United States’ relationship with Iran obviously was very bad. Iran had taken hostages from our embassy in the late ’70s. And so there’s this real investment on the part of the Reagan administration to just keep the Iraqis – at least to give them whatever advantage we thought we could provide them.

And the opportunity exists, you know, really kind of materializes, in the late 1980s when we detect, the U.S. detects through satellite intelligence that there is this hole in the line of the Iraqi defenses that the Iranians are about to go through, and the Iraqis don’t know this yet.

And so there’s a decision to give them, effectively, this heads-up, so that they can start preparing for that and mount a counterstrike. This was something that was, you know, approved, really, our reporting shows, at the highest levels of the Reagan administration, and again knowing that this attack from the Iraqis would be accompanied by chemical weapons.

But even though the Reagan officials knew that, it was still deemed too important to not provide this information about the positions of the Iranian troops to the Iraqis, because if the Iranians broke through that hole in the defenses, it could potentially turn the tide of the war in Iran’s favor, and that was simply something that they were not – the Reagan officials were not prepared to let happen.

CHAKRABARTI: Now, in your reporting – again, just to reiterate, you are looking at declassified, recently declassified documents from the CIA. But you also spoke with retired Air Force Colonel Rick Francona. Tell us a little bit about him.

HARRIS: Well, he was a military attache in Baghdad in the late 1980s, and later actually was on the ground that the site of some of these chemical attacks and managed to secure physical evidence, including empty syringes that the Iranians had used to inject themselves with, like, an antidote to the chemical weapons.

And what he provided for us was – in addition to other officials who we spoke with, who would not be quoted on the record in this story – provided us with more insight into what was going on within the intelligence community and the thinking and the calculus that was being made. In fact, he told us one very interesting story where there was a report that was sent up to President Reagan about this potential for the Iranians to break through and to launch a new offensive against the Iraqis.

And what Francona told us was that President Reagan read that report and wrote a note in the margin addressed to Secretary of Defense Frank Carlucci at the time that said, quote, “an Iranian victory is unacceptable,” end-quote. And it was, again, this sort of – a piece, again, a line into that thinking of President Reagan and his top officials that, you know, the bottom line in this situation was we have to do whatever we can to ensure that the Iranians do not win.

CHAKRABARTI: Shane, we’ve just got a couple seconds to go, but this is fascinating reporting about events that happened, you know, in the 1980s. Given where we are right now, in the midst of this Syria crisis, what do you think this history has to tell us that might shed some light on where we are today?

HARRIS: Well, it certainly tells us that at various points, when faced with the use of these kinds of weapons by other countries, we’ve made very different calculations, and not based on morality and on international norms the way we are now. And I think it just shows you that, you know, different sets of actors in the U.S. government can frequently approach this same sort of predicament, but through a very different lens and come to very different conclusions. It was a much colder kind of calculus back then than it is today, frankly.

CHAKRABARTI: Shane Harris is senior writer for Foreign Policy magazine. He’s also author of “The Watchers: The Rise of America’s Surveillance State” and coauthor of a new report on America’s knowledge of the use of Iraqi chemical weapons in the 1980s. Shane, thank you so much.

HARRIS: You’re quite welcome. Thank you. 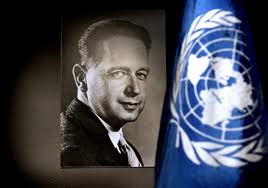