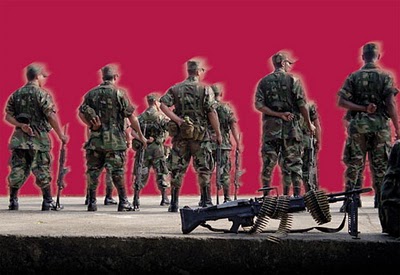 Twenty years ago tonight, Judith Berg came close to being gunned down with her ex-husband in one of Denver's most heinous murders.
But she prefers not to think about that.
Instead, she focuses on trying to stop the hate and racism that led neo-Nazis to assassinate Alan Berg — an abrasive-yet-popular talk show host on KOA-AM (850) radio.

On June 18, 1984, around 9:30 p.m., a hit squad was parked on Adams Street, staking out Alan Berg's town house. Judith had been there with him shortly before.

As Berg stepped out of his Volkswagen Beetle, he was cut down by a one-second burst of 13 bullets from a machine gun. He died instantly. Traces of the bullet holes can still be seen on the building's garage door.

It was the most notorious in a string of crimes committed by members of a gang that called itself Bruder Schweigen, or the Silent Brotherhood.

To the world, the group was known as The Order, patterned after the ruling clique in the racist novel The Turner Diaries.

Written by the late William Pierce, founder of a leading neo-Nazi organization called the National Alliance, the novel depicted a white revolution that included bombings and mass killings.

Eleven years later, the same novel would be embraced by Timothy McVeigh, whose bombing of the Oklahoma City federal building mimicked an event in the book.

It's that type of imitation that has Judith Berg concerned.

The 'disease of hate'

"Have things changed? Have we learned anything," she asked in an interview this week. "I just wish people noticed how it affected the future. It was a very shocking murder, which subsequently has been repeated in many ways."
Over the last two decades, Judith Berg has crisscrossed the country, speaking to diverse groups about what she calls the "disease and anatomy of hate," a sickness that can infect people so strongly that they commit horrible crimes.

Nearly all of the four dozen people associated with The Order had been ordinary folks with no criminal records until they began to conspire to establish a whites-only nation.

Members killed Berg and one other person, and committed numerous robberies, including a spectacular open-road heist of an armored truck near Ukiah, Calif., that netted $3.8 million.

They established a terrorist training camp in the remote Idaho panhandle woods and formulated a plan to break up into small cells to fan out and commit various acts of terrorism.

The FBI cracked the case before much more happened, killing The Order's leader, Robert Jay Mathews, during a 36-hour standoff on Whidbey Island, in Washington's Puget Sound, on Dec. 8, 1984.

Berg said the murder of her ex-husband was a watershed event that inspired more hate-movement violence.

"What happened to Alan in the grown-up world has reached into the youth culture," she said. "It opened the door to an acceptance of violence as a means of acting on hate."

The nation's attention is now focused on terror threats from abroad, but Berg thinks the nation should also look inward.

"While our backs are turned toward overseas, hate groups are having a heyday," she said.

"People are very unhappy; they're out of work and jobs are scarce. They're ripe for joining extremist groups. We need to understand what happened to make sure it doesn't happen again."
Remarks provoke neo-Nazis

Alan Berg was a Chicago attorney who moved to Denver, where Judith had returned ahead of him. He entered the world of talk radio at a suburban Englewood station in 1975. A friend who had a radio show invited him to share the mike during a Sunday afternoon when most of Denver was tuned to the Broncos.

A natural and provocative raconteur, Berg was a hit. He honed the in-your-face insult style pioneered by TV talker Joe Pyne.

A strong opponent of Ku Klux Klansmen and neo-Nazis, Berg often challenged them on the air.

One who tangled with Berg was David Lane, a former Denver Klansman who had become affiliated with the Aryan Nations group in Idaho. Prosecutors claimed that through this connection, The Order selected Berg as its first assassination target.

On the evening Berg was killed, Alan and Judith, who were divorced but remained friends, had dinner at the old Jefferson 440 restaurant in Lakewood, where a Wal-Mart now stands. They planned to stop at his Congress Park town house to call his mother in Chicago for her birthday, but Alan was tired and wanted to retire early.

So after making a quick stop in his driveway — the hit squad watching from a rented Plymouth — Alan and Judith drove off again without getting out of his car.

After taking Judith to her car in the Cherry Creek Shopping Center, Berg returned home and was killed.

Lane was convicted in U.S. District Court in Denver as the getaway driver. Bruce Carroll Pierce, one of The Order leadership's inner circle, was convicted of being the triggerman. Two others accused, Richard Scutari and Jean Craig, were acquitted of the actual killing.

Order leader Mathews also was alleged to have been at the scene of the murder.

The crime fostered division in the gang over tactics and timing and led some to cooperate later with prosecutors at several trials.

Scutari and Craig were convicted of racketeering and conspiracy in another Order case in Seattle and sent to prison.

Some Order members have been paroled, while others have release dates spanning the next 14 years.

More than 75 people were charged with crimes in The Order case and subsequent related investigations. Most chose to plea bargain for lesser charges.