Selected Comments from Starke Co. locals on this story: It is odd that 2 people would commit suicide?? weird dont you think......or is anyone thinking ...

Friday, Dec 5 at 11:59 PM WHERE..WHERE IS IT? wrote - ARE THERE ANY GOOD MEN OF INTEGRITY & HONOR READY TO STEP UP & LEAD? WHERE ARE THEY? THIS COUNTRY AND IT'S PEOPLE STOOD ON THE FOUNDATION OF TRUTH & HONESTY, WHERE HAS IT GONE?
•••••• 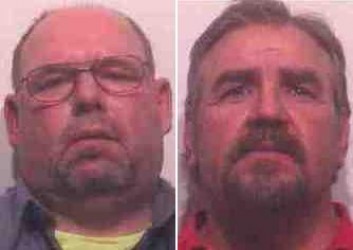 STARKE CO. — A nine-month investigation by the state has landed two Starke County officials behind bars, and one man believes it may have caused his nephew to kill himself.

Police arrested Highway Department Superintendent John Norris and Commissioner Mark Milo Thursday. Norris is charged with official misconduct and theft, accused of selling county property for scrap and keeping part of the money. Milo is charged with official misconduct and conflict of interest, accused of making a profit off the sale of items to the county.

According to court documents, Milo allegedly sold a backhoe tractor to a third party. That dealer then sold it to the county. The state alleges the sale price was for much more than the backhoe was worth.

"I've known Mark all my life,” he told WSBT News. “I've done business with Mark Milo. I consider him a good friend."

But others are not surprised. Melvin Fisher says his nephew killed himself because of what he knew.

"I told him don't worry about it, somebody will find out sooner or later,” Fisher said.

His nephew, Jim Saine, worked at the County Highway Department. Fisher says Saine was worried because he knew too much.

"He didn't want to lose his job,” Fisher said. “I don't know if that was the only factor, but I know it was the biggest factor."

Two weeks ago Jim talked to his uncle about suspicious activity going on at work. "But he said the numbers on the backhoe that the county was supposed to get didn't match,” Fisher recalled. “Oh yes, definitely [he thought that was suspicious].”

Fisher says Jim had been interviewed by state investigators, and he claims that led to ongoing harassment by other highway department workers, including the superintendent, John Norris.

"He mentioned about them hanging him up by his belt,” Fisher said.

As the community is left wondering exactly what prompted the arrests of Milo and Norris, Fisher says one thing's for sure.

"I'm happy for him right now that something has come to a head instead of swept under the rug,” he said.

Norris and Milo are out on bond. They have both entered a not guilty plea.