In WW I, Hitler was Not a “Brave Soldier,” per Nazi Propaganda, but a “Rear Area Pig” Despised by his Fellow Soldiers 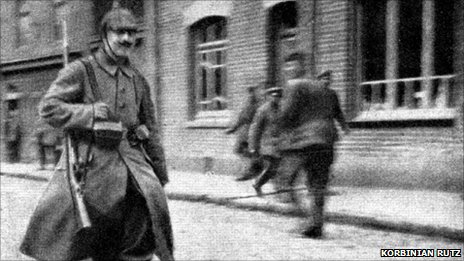 Dr. Thomas Weber’s book Hitler’s First War claims Hitler exaggerated his early role in battle, and that he was instead what was known as a “rear area pig”. Dr Weber said he had uncovered new archive material and personal documents which challenged popular understanding of Hitler and the Third Reich.

He said: “I discovered we know next to nothing about Hitler.”

Dr Weber claims the Nazis worked to suppress and discredit accounts of Hitler’s early war role. He said as a dispatch runner Hitler was significantly distanced from his regiment’s front line troops and was clearly despised by them.

Dr Weber said: “I never thought I would write about Hitler as so many books have been written about his life. But virtually everything that we do know is based on Mein Kampf or Nazi propaganda. I was surprised how much new material we found and more than 70% of my book is based on previously unused sources.”

He said: “The myth of Hitler as a brave soldier and the camaraderie of the trenches was used by the Nazi party from the beginning in order to extend its appeal beyond the far right. The reality was a gulf between the majority of soldiers and Hitler. The commonly held view that Hitler had the dangerous job of running between trenches to deliver messages simply does not stand up.

“I found that his role was to deliver messages between regimental HQ and, for instance, battalions or the HQs of other units, and not companies, as has previously been stated – so he would have been between three and five kilometres behind the front line.”

Hitler’s First War will be available from 16 September.

Previous Article
Majority of Border Residents Feel Safe
Next Article
The Progeny of IG Farben: Corruption in the Pharmaceutical Industry is a Minimal Risk Enterprise

The Progeny of IG Farben: Corruption in the Pharmaceutical Industry is a Minimal Risk Enterprise
Aug 19