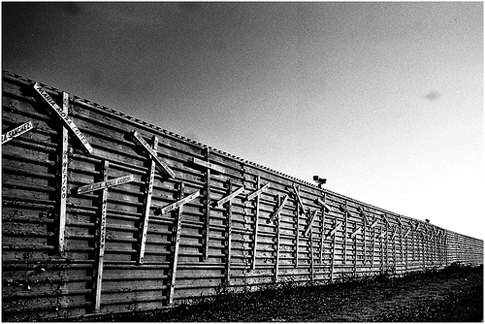 Crosses along the border wall memorialize those who didn’t make it. Photo by keiforce

A large majority of the residents of Texas cities on the U.S.-Mexico border feel relatively safe despite harsh rhetoric from lawmakers and a consistent media portrayal of their communities as war zones, according to a poll released today.

The poll of 1,222 residents of border cities from California to Texas was commissioned by the Border Network for Human Rights and conducted by the Reuel Group. More than a quarter of the respondents live in El Paso, Laredo, McAllen and Brownsville.

Overall, 87.5 percent of those surveyed said they felt safe as they drove and walked in their neighborhoods, while 7.8 percent said they did not.

About 70 percent said they felt their neighborhoods were as safe as most in the country. Slightly more than half said they would allow their children or grandchildren to play in a neighborhood park.

In McAllen, 93 percent of residents said they felt safe walking or driving in their neighborhoods, compared to 85 percent in El Paso, 80 percent in Laredo and 75 percent in Brownsville.

But fewer residents of those cities feel their neighborhoods are as safe as those elsewhere in the U.S: just 76 percent in El Paso, 66 percent in McAllen, 58 percent in Laredo and 44 percent in Brownsville.

Opponents of an increased law enforcement presence on the border say the results prove the heated dialogue over border security pays a disservice to people who actually live there and is only useful to self-serving politicians.

“We hoped (this poll) would tell the real story of the border — especially the real perceptions and feelings of border residents about safety and security,” BNHR Executive Director Fernando Garcia said during a conference call with reporters. “This poll sets the record straight.”

The results were released the same day the U.S. House of Representatives approved a supplemental spending bill that includes $600 million for 1,500 additional federal agents on the border and more unmanned aerial drones.

At an event Monday put on by the Texas Public Policy Foundation, Gov. Rick Perry said Texans risk ignoring “the current warning signs along our international border at our own peril” and cited the recent slaying of an alleged cartel member in El Paso as proof of an increase in spillover violence. On Tuesday's conference call, however, El Paso County Sheriff Richard Wiles pointed out that El Paso is consistently ranked one of the safest cities of its size in the country.

“I have to agree with Fernando in regard to resources," Wiles said. "I do think that resources are misdirected at the border.” Wiles commended the positive effect an increased federal presence has had in fighting illegal immigration but said new money should now be directed in a way that focuses more on community and neighborhood security.