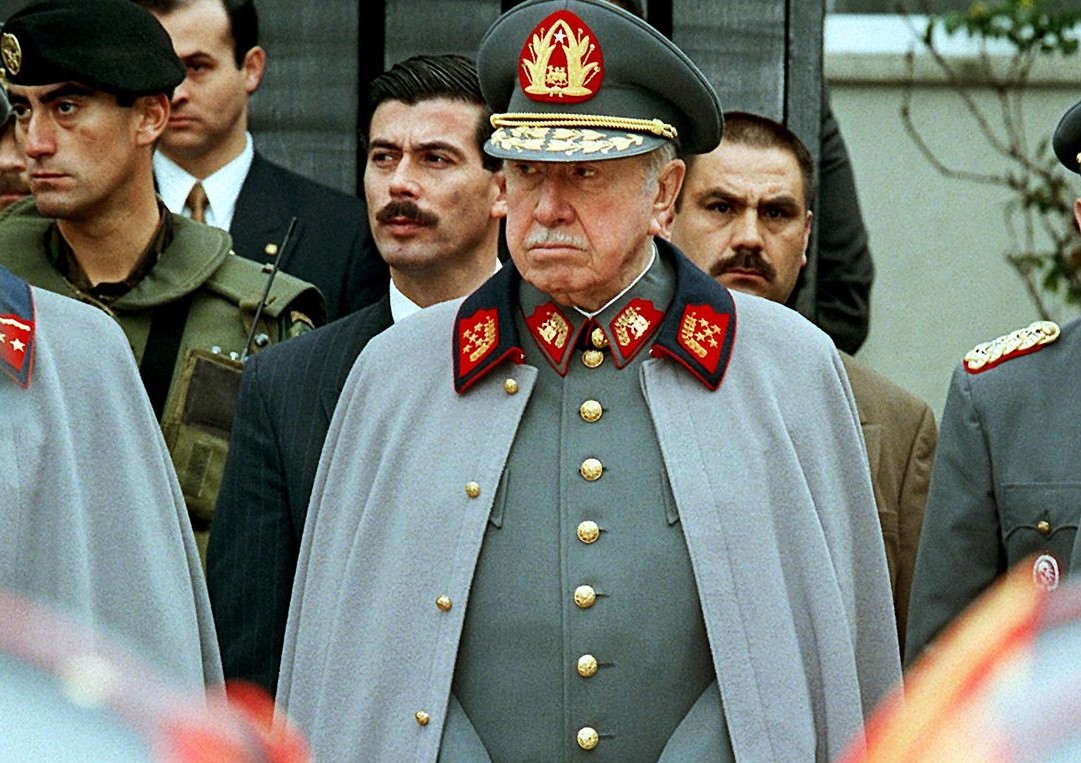 British authorities and the financial sector are linked for the first time to the late Chilean dictator's £1bn fortune. Hugh O'Shaughnessy reports

Two-and-a-half years after the death of General Augusto Pinochet, a report by the Chilean police task force charged with investigating money-laundering has claimed that British authorities and the financial sector were complicit in hiding his massive ill-gotten fortune.

Though the Pinochet family protects the details of its wealth with the help of bankers and advisers from Britain and other countries, the pile of assets in cash, gold, government bonds and shares controlled by the family of the late dictator is now believed to amount to as much as £1bn.

The report by Brilac, the Chilean police task force, says that the freeze on the dictator's funds issued in 1998 by the Spanish investigating magistrate Baltasar Garzon, who was seeking the ex-dictator's extradition to Spain on charges of torture and murder, was in effect ignored by the financial sector in Britain, despite the fact that Britain was under an obligation to enforce it.

Professor David Sugarman, the director of the Centre for Law and Society at Lancaster University and author of a forthcoming book on Pinochet's arrest and imprisonment, said yesterday: "It looks like some of the banks holding Pinochet's funds did not comply with the letter and spirit of their duties of disclosure, due diligence and the legal requirement to report suspicious circumstances."

The sustained cover-up of the Pinochet fortune – largely amassed through drugs and arms dealing, and Pinochet's making over of newly privatised state concerns to family members – took place in British colonies which were ultimately controlled by Whitehall. They range from Gibraltar, the Caribbean tax havens of the Cayman Islands and the British Virgin Islands (BVI), to former colonies such as the Bahamas and Hong Kong. With help from within the British finance industry, offshore bank accounts were set up at the same time as companies with names such as Abanda Finance, Althorp Investment Trust, Ashburton, Belview International, Sociedad de Inversiones Belview, Cornwall Overseas, Eastview Finance, GLP, and Tasker Investments. The corrupt and chaotic state of some offshore tax havens was illustrated this month by Whitehall's decision to dismiss the local authorities and resume direct rule in the Turks and Caicos Islands.

In Hong Kong, Pinochet was reported in 2006 to have lodged $160m in gold bars with an international bank, though the bank has denied this. British banks and other institutions also acted on Pinochet's behalf not just in colonial tax havens but also in independent Commonwealth states such as the Bahamas, and in the US.

The Brilac report shows that Riggs, the Washington bank that did much of Pinochet's business, ran a London branch near St James's Palace, which – asset freeze or no asset freeze – was used as a moneybox by the detained ex-dictator. Riggs was taken over by a bank in Pittsburgh in 2005 after its activities for the world's tyrants and tax-dodgers were denounced by the US Senate. The Brilac report says that when Pinochet closed his account at the branch (held under the name of Althorp Investments, one of his BVI companies) in May 2002 it contained $219,285.74.

While he was under arrest at Virginia Water, Surrey, between 1998 and 2000, the elderly detainee still managed to access his funds held at Riggs bank. Pinochet's grandson, Rodrigo Garcia Pinochet, told the magistrate in Santiago investigating money-laundering in 2004 how he bought a rucksack to carry the £50,000 in cash which his grandfather had sent him to collect from St James's and bring to the small house by the Wentworth golf course where the ex-dictator was confined.

The Chilean police report states that, for instance, the Miami branch of another international bank was concerned in the establishment in May 1991 of Belview International, a front company at Wickhams Cay in the BVI. Belview was the formal owner of, and trader in, much of Pinochet's property, which stretched from flats in the northern Chilean port of Iquique to others in the Santiago districts of Vitacura and Ñuñoa and to the smart seaside resort of Viña del Mar. Belview went on to be run by the Miami branch of another international bank, and was overseen by Pinochet's Chilean bagman, Oscar Aitken.

Then there was Abanda Finance, set up as a tax dodge wholly or partly owned by the Pinochet family and also domiciled in the BVI. In Gibraltar, Britain's only surviving colony in Europe, the Banco Atlantico was another of Pinochet's favourite banks, where he had an account to which he sent $2,658,604.84 on 19 October 1989, an amount which he said he had "forgotten" to include in a list of assets he had produced two days previously. He and his son, Marco Antonio, continued to keep the Banco Atlantico account well topped up. Banco Atlantico was set up in Cuba a century ago and its owners included the Continental Illinois Bank and Rumasa, run by the Opus Dei éminence grise Jose Maria Ruiz Mateos. It was nationalised by the Spaniards in 1983 and later sold to private business.

Simple ruses were used to hide the fact that the banks were dealing with the Pinochet family fortune. Accounts were opened which were designated by any combination of his Christian names or initials – Augusto Jose Ramon – and the surnames of his father, Pinochet, or his mother, Ugarte, and those of his wife, Lucia Hiriart Rodriguez. Some bankers preferred to call him Joe (from Jose), or APU (Augusto Pinochet Ugarte). The practice made the tracing of information about him as difficult as, say, looking for Griff Rhys Jones under "Jones" or Iain Duncan Smith under "Smith". Various accounts were labelled merely "L Hiriart and/or AP Ugarte".

A one-time representative of Deloitte & Touche, Richard Evans, is alleged by the Brilac report to have acted in connection with Ashburton Trust, which was created by Riggs and whose beneficiaries included Pinochet's five children, who each had a 20 per cent share. Mr Evans was also listed by Brilac as a director of Althorp Investment Trust, another repository for Pinochet family funds. It said he w as active in promoting businesses in Argentina and was being investigated for money-laundering.

Deloitte spokesman Ignacio Tena said: "Deloitte & Touche Corporate Services was contracted by Riggs Bank and Trust Company (Bahamas) to render administrative services for Riggs and some of its clients. Riggs did the due diligence, and gave all the information related to its clients, in accordance with the usual commercial practice and the Bahamas' law."

Judicial investigations in Santiago this month have revealed details of the connections between Pinochet's last financial fling while he had a position in the army – the purchase of 200 German-built Leopard tanks from a Dutch company, RDM Technology, and dummy companies set up in the Bahamas. On this deal, he received a "commission" of $1.6m through Cornwall Overseas.

The magistrate investigating the sources of Pinochet's wealth, Manuel Valderrama, ordered the arrest this month of two retired officers formerly in the army's supply branch, General Luis Iracabal, once a member of the Dina, Pinochet's secret police, and Brigadier Gustavo Latorre Vasquez, on suspicion of being involved in the corruption. Meanwhile, Mr Aitken is seeking a supposed debt of more than $1m for unpaid fees that he claims were owed to him when Pinochet died in December 2006.

New details have also emerged of how Pinochet used Cema-Chile, a body supposedly dedicated to supporting 34,000 women affiliated to more than 2,000 mother-care centres with funds from the national lottery, as a money-laundering operation and cash machine. According to an application to the Chilean appeal court from Alejandro Navarro, a left-wing contender in the forthcoming Chilean presidential elections, Cema-Chile – fed with Pinochet's illicit funds from the former dictator's dummy companies in the Commonwealth Caribbean and not legally obliged to submit accounts – regularly provided the family with cash for mountainous "expenses" with no questions asked.

The Brilac report recounts how the minutes of a Cema-Chile board meeting on 13 November 1998 recorded the remittance of $50,000 to Pinochet's wife to cover costs incurred when he was under arrest, adding that $10,000 of this sum went into the account of Julia Hormazabal, Cema-Chile's director.

Plunder – A family business: Much of General Pinochet's fortune was generated by his drugs and arms dealing and from privatisations encouraged by the International Monetary Fund and right-wing economists after he seized power in 1973.

Pinochet decreed these privatisations before any regulation was put in place over the new private monopolies. Consequently they were wildly profitable. In chemicals and iodine the state-owned Soquimich company, with annual profits of $67m, was made over to Julio Ponce, then Pinochet's son-in-law. The state insurance agency, ISE, was handed to Jorge Aravena, another son-in-law. Paper mills, telephone companies and energy concerns were also given out to family members and hangers-on.

The rise and fall of a dictator

1973 General Augusto Pinochet sweeps to power in Chile on 11 September after leading an armed coup that puts him at the helm of a military dictatorship that will last 17 years. The junta shells the presidential palace; President Salvador Allende is killed.

1970s Before appointing himself president in 1974, Pinochet orders the slaughter of more than 3,000 Allende supporters; tens of thousands more are tortured or exiled. He shuts parliament and bans all political and union activity. He enjoys support as economy recovers, but always faces opposition.

1988 Pinochet's government holds referendum on his rule – he loses. 1990 Steps down as president, but stays as army commander in chief.

1998 Relinquishes his rank, months before he is arrested and detained in London.

2000 Is allowed to return to Chile where he avoids trial for human rights abuses on ill-health grounds.