Iran and America, Friends or Foes? 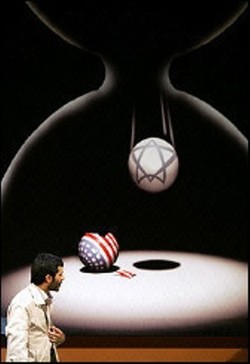 " ... do both nations use each other in order to salvage domestic support at home? ... "

America and Iran are meant to be natural enemies, however, their relationship is very complex and sometimes both nations share a common vision in the realm of geopolitics. Yet to the outside world both nations do not trust each other and this is based on so-called tension and mutual loathing. However, do both nations really hate each other or are quotes taken out of context or do they have cultural meanings? Or do both nations use each other in order to salvage domestic support at home? So what is the real relationship?

If we focus on economics and the nuclear issue, then it is abundantly clear that America does enforce a strict economic blockade on Iran. At the same time the nuclear issue could be the one area which causes a possible limited conflict or where America gives Israel the green light. So it is clear that you do have major tensions within the relationship and maybe it is Iran which is forcing this breakdown? After all, if it wasn`t for the nuclear issue then tensions or conflicts could be contained, just like in the past. Given this, Iran should remember that America once had dealings with Saddam Hussein but he also over-stepped the mark.

Yet when we concentrate on the field of foreign affairs and geopolitics then we see a very different relationship because in recent times both nations have worked together. Sometimes this may have applied to mere tacit support and not directly working together, yet this tacit support did sometimes involve a shared common ground. Therefore, it is important to focus on this unspoken side in order to highlight the complex nature of their recent relationship.

If we turn the clock back to Bosnia and Kosovo respectively, then America and Iran had a shared interest in supporting the Muslims of the Balkans. During the Bosnian conflict the United Nations enforced a military embargo on all sides. However, America clearly gave Iran the green light to send military arms to the Bosnian Muslims and this is how the Bosnian Muslims, and Croatians, could turn the table against Serbia within both Bosnia and Croatia. Because the military arms embargo was clearly broken and Iran often sent in military arms in order to prop-up the Bosnian armed forces. Also, this American-Iranian policy in the Balkans shatters the myth that America is anti-Islamic. After all, during Bosnia, Kosovo, and Cyprus respectively, the armed forces of America and senior politicians sided with Islam every time.

If we even dig further and turn the clock back even more, then we even see covert dealings under the late Ayatollah Khomeini. This applies to the murky Oliver North scandal with regards to the Iran-Contra affair, whereby Iran was involved in supporting the Contras in Nicaragua, via American economic support. Therefore, elements within the American administration were adopting a different policy and sometimes elements within different departments were ignoring senior political leaders.

Now if we forward the clock to more recent times then the same situation happens again. For example, when America attacked the Taliban in Afghanistan they allied themselves with the Northern Alliance. The Northern Alliance in turn was supported by both the Russian Federation and Iran. More astonishing was the fact that Iran gave America secret information about the Taliban, after all, the Taliban hated Shia Muslims. So both nations, just like the Balkans, had a shared and vested interest.

If we also focus on Iraq then a similar linkage emerges once more. Because Iran also gave covert support to America via knowledge they had obtained during the Iran-Iraq war. Also, Iran did little to prevent this conflict because they hated Saddam Hussein and his secular regime. Therefore, was the trade off an Islamic state? Because once the secular government had been defeated, then America installed Sharia Islamic Law which in turn persecuted the Christian community.

Given all this, then what is the truth behind the "veil?" Do both nations share similar aims and objectives within a limited geopolitical space? If they don`t, then how do you account for past dealings between both nations? This issue needs to be debated openly because nothing appears to make sense when it comes to the relationship between America and Iran.