" ... Postwar whitewashing of the foreign ministry's role under Hitler led many to assume that the organisation was staffed largely by aristocrats who privately despised the Nazi party and helped in the failed 1944 attempt to assassinate its leader. However the report concludes that this was true in only a handful of cases. Far from being concerned about the plight of the Jews, the report shows that most of the diplomats were wholly anti-Semitic. ... "

Report says department was enthusiastic backer of the Holocaust 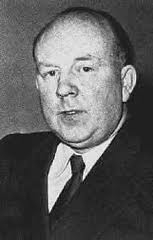 Franz Rademacher, the German Ministry official responsible for Jewish affairs. Rademacher unashamedly acknowledged that he visited Serbia, then under Nazi occupation, to oversee "liquidation of the Jews in Belgrade."

It had always been regarded as Nazi Germany's only "decent" government ministry and one which shunned the persecution of the Jews, but a new and shocking study to be published this week exposes the Third Reich's foreign office as a "criminal organisation" which backed the Holocaust to the hilt.

The disturbing report, which is the result of five years of research by a group of German and independent foreign historians, explodes the myth that has largely prevailed since the end of the Second World War that under Adolf Hitler, Germany's foreign ministry somehow survived as an isolated nest of anti-Nazi resistance.

The extent of German foreign diplomats' active involvement in the Holocaust is graphically outlined by Eckhart Conze, one of the four historians who compiled the 880-page report. In an interview with Der Spiegel magazine conducted in advance of the study's publication on Thursday he described the foreign ministry as a "criminal organisation".

"The foreign ministry was not just somehow caught up in National Socialism or even a haven of resistance as has long been claimed. It was actively involved in every operation to persecute, expel and exterminate the Jews from the very beginning," he said. "It functioned as an institution of the Nazi regime from day one and backed its policies of violence throughout."

Even after 1945, the ministry of the democratic West Germany continued to employ hundreds of heavily implicated Nazi-era diplomats, he added, and furthermore intervened to prevent their being brought to justice for their involvement in the Holocaust.

The study shows how Willy Brandt, Germany's "enlightened" post-war Social Democrat chancellor, who is still regarded as a beacon of hope by the political left, helped to shield the liberal politician Ernst Achenbach from being prosecuted by the French authorities. Achenbach, a senior German diplomat in Paris during the war, helped to deport thousands of Jews to the death camps. But in 1974, Brandt blocked French plans for a Franco-German treaty which would have allowed the French to prosecute him.

Scores of other German diplomats with a Nazi record were dispatched to countries in Latin America and the Arab world after the war to prevent them from being exposed. The report says that many used an official body called "The Central Office" that was set up to aid former prisoners to warn fugitive Nazis of impending arrest warrants. One of them was Klaus Barbie, the infamous "Butcher of Lyon," who remained on the run until 1983.

Even German prosecutors who helped initiate the capture of Adolf Eichmann in Argentina in the early 1960s had to ask Israel to track him down because they feared that Germany's diplomats might tip him off.

The study was commissioned by Joschka Fischer, Germany's former Green Party foreign minister, who admitted in an interview published at the weekend that he was utterly shocked by its findings. "It makes me sick to think about them," he said.

Yesterday, Frank-Walter Steinmeier, who was German foreign minister until last year, said it was "incredible" that it had taken more than 60 years to launch such an inquiry.

Among the revelations in the study is an expenses slip submitted by Franz Rademacher, the ministry's official responsible for Jewish affairs, following a wartime visit to Nazi-occupied Serbia. Rademacher unashamedly writes that the reason for his visit was "liquidation of the Jews in Belgrade".

The report shows that German foreign ministry diplomats in Nazi-occupied Paris and throughout Europe played an active role in deciding whether Jews should be deported and sent to the gas chambers.

"If the French Resistance killed German soldiers, it was the diplomats who immediately deliberated whether to deport a thousand or 2,000 Jews to the extermination camps as a punishment," Mr Conze said.

Postwar whitewashing of the foreign ministry's role under Hitler led many to assume that the organisation was staffed largely by aristocrats who privately despised the Nazi party and helped in the failed 1944 attempt to assassinate its leader. However the report concludes that this was true in only a handful of cases.

Far from being concerned about the plight of the Jews, the report shows that most of the diplomats were wholly anti-Semitic. "There was the typical aristocratic anti-Semitism that prevailed in top diplomatic circles. Ernst von Weizsacher himself spoke of a 'Jewish flood'," Mr Conze said.

Mr Fischer commissioned the report in 2005 following a row about an obituary in an internal German foreign ministry staff newspaper about the former diplomat Franz Nüsslein. The entry deliberately avoided mentioning that he had been responsible for the execution of hundreds of Nazi opponents in German-occupied Prague during the Second World War.

Ernst von Weizsäcker The father of former German president Richard von Weizsäcker served as ambassador to Switzerland in the mid-1930s and campaigned to have German-Jewish novelist Thomas Mann stripped of his German citizenship for his criticism of Nazi Germany. Ernst von Weizsäcker was found guilty of helping to deport hundreds of Jews from Paris to the Nazi death camps at the Nuremberg Trials in 1949. He was sentenced to five years in jail, but was released a year later under an amnesty. He died in 1951.

Franz Rademacher Nazi Germany's foreign ministry diplomat responsible for Jewish affairs took part in the Wannsee Conference of 1942 which finalised plans for the Holocaust. He admitted on an expenses slip submitted to the foreign ministry in 1941 that a visit to Serbia had been to supervise the "liquidation of Jews in Belgrade". He was involved in the deportation of thousands of Jews to Auschwitz. He was sentenced to prison terms for his role in the Holocaust but spent only three months in jail. He fled to Syria in the 1950s where he was accused of spying. He returned to Germany in 1966, and died in Bonn in 1973.

Ernst Achenbach A liberal Free Democrat Party politician and lawyer in post-war West Germany, Achenbach was an attaché to the German embassy in Paris in Nazi-occupied France and took part in the deportation of thousands of Jews to the death camps. Although sentenced in absentia for his crimes by post-war France, he blocked a Franco-German treaty that would have led to his prosecution and imprisonment. He died in Essen in 1991.