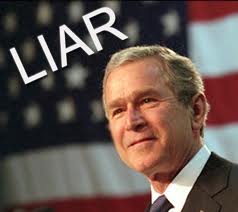 Former German chancellor Gerhard Schroeder says that George W. Bush is fibbing about him in his new memoir. Bush was furious at Schroeder for winning reelection in 2002 by campaigning vigorously against the Iraq War. The looming war was wildly unpopular in Germany and Schroeder caught an election wave by pledging that Germany would not participate.

Now Bush claims in his memoir that Schroeder deceived him by promising support for the war when they met at the White House on January 31, 2002. Schroeder's response: "Bush is not telling the truth." Schroeder says that he only promised to support the Iraq War should it become clear that Saddam Hussein was supporting al-Qaeda, He never got the proof he wanted because it didn't exist.

So Bush says Schroeder lied to him. Schroeder says Bush is lying. Whom do you believe?