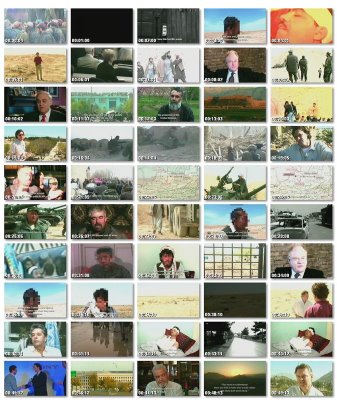 The UK Times Online has posted a video of the aftermath of the killings of dozens of villagers in the Afghan village of Nawabad (called Azizabad in other stories). The U.S. has maintained that seven civilians and three dozen Taliban militants were killed in the combined U.S. Special Forces/Afghan Army/U.S. air operation last August 21. The United Nations and local villagers insist that 92 civilians were killed, over half of them children. According to the article:

In the video scores of bodies are seen laid out in a building that villagers say is used as a mosque; the people were killed apparently during a combined operation by US special forces and Afghan army commandos in western Afghanistan. The film was shot on a mobile phone by an Afghan doctor who arrived the next morning.

Local people say that US forces bombed preparations for a memorial ceremony for a tribal leader. Residential compounds were levelled by US attack helicopters, armed drones and a cannon-armed C130 Spectre gunship.

Besides the UN, the villagers' account is backed up by investigations from an Afghanistan government delegation and what the Times calls Afghanistan's "leading human rights organisation."

Now, NATO command is backing off the official story, noting that there is a "discrepancy" in death toll figures, and expressing the usual "heartfelt sorrow." But , as the Times reports, a new report by Human Rights Watch says that under reporting of civilian deaths in Afghanistan is out of control. (The report criticizes both U.S./NATO and Taliban forces.)

Taking what it says are the most conservative figures available, Human Rights Watch has calculated that civilian deaths as a result of Western airstrikes tripled between 2006 and 2007 to 321. In the first seven months of this year the figure was 119. In the same period, 367 civilian deaths were attributed to Taleban attacks. It accuses US officials of routinely denying reports of civilian deaths.

Perhaps the most amazing political news surrounding the Nawabad massacre is that the Pentagon says it relied for its account, in part, on corroborative evidence by the embedded journalist on the scene: Fox News "reporter" Oliver North! The Times portrays North as coming "to prominence in the 1980s Iran-Contra affair."

Actually, North was convicted for three felonies in regards to his activities during the Iran-Contra scandal. He only escaped a suspended prison sentence and $150,000 in fines because, as his Wikipedia bio describes it, an "appeals court found that witnesses in his trial might have been impermissibly affected by his immunized congressional testimony." North had been deputy director for political-military affairs for the National Security Council under Reagan, until the scandal brought his career to a halt.

North came into the public spotlight due to his participation in the Iran-Contra Affair, in which he was the chief coordinator of the sale of weapons via intermediaries to Iran, with the profits being channeled to the Contras in Nicaragua. He was responsible for the establishment of a covert network used for the purposes of aiding the Contras. U.S. funding of the Contras by appropriated funds spent by intelligence agencies had been prohibited by the Boland Amendment.

North's testimony in front of a congressional committee during the Iran-Contra hearings marked him as an unabashed apologist for covert operations and the projection of American power abroad, irregardless of the will of those in the countries subjected to U.S. intervention. Lying to Congress was justified, in his opinion, because he supported the anti-Sandinista "Contras", whom he labeled "freedom fighters." Since then, and after an unsuccessful foray into politics, he has made his living as a right-wing ideologue, writing books, and establishing himself as a right-wing television commentator.

It looks like North's service to his military masters has never ended. Looking at the video from the Times, which shows rows of dead bodies, including many children, we can only conclude that North has once again lied for the government. It's his specialty, and one shouldn't be surprised. However, North's participation in this U.S. military cover-up vividly calls into question the role of embedded "reporters" among the armed services.

The cover story on Nawabad/Azizabad included U.S. asssurances that the villagers were lying about the casualties. This from Chris Floyd's coverage:

What's more, the Pentagon then claimed that the reports of a wider slaughter were being faked by the villagers, at the behest of the Taliban. The American brass even accused the survivors of the attack of creating fake graves to fool the good-hearted U.S. military inspectors who, it was claimed, quickly visited the scene to ascertain the truth.

But Carlotta Gall is reporting at the New York Times:

Cellphone images seen by this reporter show at least 11 dead children, some apparently with blast and concussion injuries, among some 30 to 40 bodies laid out in the village mosque. Ten days after the airstrikes, villagers dug up the last victim from the rubble, a baby just a few months old. Their shock and grief is still palpable....

A visitor to the village and to three graveyards within its limits on Aug. 31 counted 42 freshly dug graves. Thirteen of the graves were so small they could hold only children; another 13 were marked with stones in the way that Afghans identify women’s graves.

If it takes this concerted of an international outcry to get the truth out of the U.S. government (and they're not admitting to anything on Nawabad yet), how many other instances of U.S. military action can even be believed? Is there anything this government even says or does that has credibility? I know that sounds severe, but that's the price power pays for mendacity and cover-up.
•••
Hat-tip to Grand Moff Texan at Daily Kos for the Times Online article