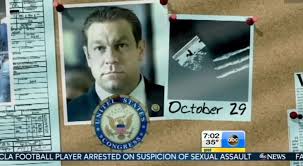 It is highly unusual for Republicans to call for another elected Republican to resign from office even when there is evidence of wrong-doing. But in the case of U.S. Rep. Trey Radel, R-Fort Myers, his path to the office may explain at least partly why state Republican Party leaders are showing little loyalty.

Radel of course, is the congressman who admitted earlier this month to buy cocaine [sic] from an undercover officer in Washington D.C.

A few days after he pleaded guilty in a D.C. court, Republican Party of Florida chairman Lenny Curry called for Radel to quit Congress.

“The people of Florida’s 19th Congressional District need a Congressman who is 100 percent focused on the needs of Southwest Florida,” Curry said. “Therefore, Congressman Radel should step down and focus his attention on rehabilitation and his family.”

Radel has refused to step aside.

Radel, a former conservative talk radio host in southwest Florida, won his Republican Primary in August 2012 with just 30 percent of the vote. In a 6-way GOP primary slugfest, that was enough to edge out Chauncy Porter Goss, the son of the former U.S. Rep. Porter Goss. The younger Goss won just under 22 percent of the vote.

Florida has no run-off election any more for congressional contest when no candidate reaches 50 percent as it used to in the early 1990s. So instead of Goss and Radel battling it out, Radel advanced to the general election.

It’s a contrast to the early 1990s when Sarasota and Manatee had a similar split in the race for Congress. Back then, Republican Brad Baker won the primary with just 28 percent of the vote. But because he didn’t reach 50 percent of the vote, Baker had to battle Bradenton Republican Dan Miller in a runoff. Miller won and wound up serving 10 years in Congress.

Here are the full results from Radel’s primary win in the 19th Congressional District last year.