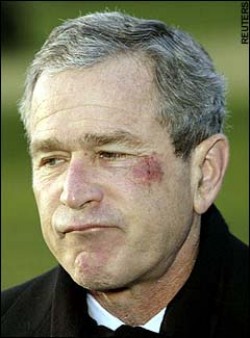 Isn’t it odd that GW Bush’s heart beats only 46 times a minute?

He has a bad ticker. Why, you ask, hasn’t the press made an issue of his SINUS BRADYCHARDIA, which is quite serious, as they have Dick Cheney’s heart problems? The answer resolves itself in two easy steps:

Heart condition may have made Bush faint

BY ROLAND WATSON IN WASHINGTON

PRESIDENT BUSH has been told that he has a HEART CONDITION that could have caused him to faint while choking on a pretzel two weeks ago. Doctors, including the White House physician, have reported that the rhythm of the President’s heart is unusually slow and uneven, making him more likely to faint if he gags or chokes.

Mr Bush’s “athlete’s heartbeat” has previously been a source of pride to his aides who like to portray it as the result of the President’s rigorous daily exercise.

However, it has emerged that the President’s variant heartbeat rhythm is down to a condition known as a SINUS BRADYCARDIA, rather than the three miles he regularly runs in less than 21 minutes….

TABLE 3: Carciac Dysrhythias and conduction disturbances reported with COCAINE USE