A day after the shooting, Sheriff Jerry Demings said Paffen “fancied himself a sovereign citizen … whatever that means to him.”

The FBI identifies sovereign citizens as domestic terrorists who do not recognize the authority of state and federal governments, or the court system. They create their own driver’s licenses and other documents. This has led to frequent confrontations with law-enforcement officials.

Over the past decade, more than a dozen police officers and members of the anti-government movement have died nationwide in gun battles.

“That’s why every Orange County deputy is trained in recognizing sovereign citizens,” said Deputy Chief Brett Meade of the University of Central Florida Police Department. “From a law-enforcement perspective we have to treat every sovereign the same because we don’t know their level of commitment. … It’s an officer safety issue.”

Meade helped design the training program when he headed the sheriff’s Intelligence Unit that investigates hate and organized crime groups. The training program is credited with the recent response by deputies that may have saved their lives during the shootout with Paffen.

At about 5 p.m. on Feb. 8, Paffen’s ex-girlfriend called 911 saying he had violated a protection order by demanding to see her outside the supermarket. The woman identified Paffen as well-armed and violent, according to records and interviews. When Paffen’s name was entered into the agency’s computer system, it responded with a warning that he belonged to the violent sovereign citizen movement, according to interviews with the sheriff’s office.

Using extra precaution, the sheriff’s office sent seven deputies to the supermarket, including four in an SUV, instead of one or two for a more routine call, according to interviews.

Paffen opened fire when the SUV entered the parking lot, wounding one deputy in the leg and injuring a second deputy with flying glass. Three deputies returned fire, killing him, according to the sheriff’s office.

Three weeks earlier, Paffen was accused of using a baseball bat to break the left arm and jaw of his ex-girlfriend’s husband, according to the protection order.

“He is also very angry with the government (and) has stockpiles of guns, ammunition food, water, medications and first-aid items,” she wrote in late January for her protection order. “I’m in fear of what he will do next ‘cause he has made statements that he could take on the entire police force, SWAT or any other law enforcement (and) that he will kill.”

Last year, a study on what U.S. police officers consider their greatest threat identified sovereign citizens first among 18 extremist groups. Islamic extremists ranked second, according to the National Consortium for the Study of Terrorism and Responses to Terrorism at the University of Maryland.

Sovereign Citizens’ ideological roots stem from the early 1970s when anti-government movements started what became known as “paper terrorism” by filing lawsuits and liens without merit against public officials. That spread with the early 1980s recession and farm crisis.

And by the 1990s, the St. Petersburg-Tampa-Orlando corridor became a “hotbed” for the sovereign citizen movement, according to Mark Pitcavage, director of research for the Anti-Defamation League.

The earliest ambush of a police officer linked to sovereign citizens involved an Orlando couple, George Sibley Jr. and Linda Lyon-Block, who gunned down an Alabama police officer in 1993 after fleeing criminal charges in Florida, Pitcavage said.

In a 1993 letter to the Orlando Sentinel, Sibley and Lyon-Block wrote they fled with her 9-year-old son to avoid being tried by evil judges in a “fraudulent and unconstitutional court… We will not live as slaves, but would rather die as free Americans.”

Both were executed in Alabama for the murder of Opelika Police Sgt. Roger Motley. Much remains unknown about Paffen’s life and beliefs. Pitcavage said it’s possible Paffen could have been a follower of various Patriot Movement groups including tax protesters, constitutionalists and militia members. Such groups spread rapidly after 2007 with the foreclosure crisis and recession, he said.

Recently obtained records do show one thing about Paffen: He was never far from firearms.

A master machinist who worked in Brevard County and was known as “Joey,” Paffen claimed he was a former member of an elite U.S. Army Ranger regiment. That could not be confirmed this past week.

His interactions with Florida law enforcement began in 1990 when he was charged with burglary and grand theft and escalated by 1995 to convictions for fleeing from police and carrying a concealed weapon in Brevard County.

After that he frequently went armed, records show.

Records show Paffen was arrested in 2007 for several traffic violations by an Orange County deputy after being stopped for blocking an intersection and having an expired temporary tag on his vehicle. At the time of the traffic stop, Paffen had in his possession two pistols, 45 rounds of 9 mm and two rounds of .22-caliber ammunition.

By 2010, the first statewide advisory warning Florida police officers about Paffen was released.

On Aug. 10 of that year, Paffen was stopped by the Palm Beach Gardens Police Department while driving a motorcycle without a license. He had a backpack with a loaded 9 mm pistol, eight loaded 15-shot magazines and three sheath knives, records show.

In February 2014, a verbal encounter between Paffen and an Orange County deputy sheriff prompted the agency’s Intelligence Unit to classify him as a sovereign citizen, spokesman Capt. Angelo Nieves said. What Paffen said has not been disclosed but he was not arrested.

By then, Paffen was living at the Ventura Country Club, a gated community with 24-hour security in south Orlando.

On Oct. 27, 2014, he was stopped by Palm Bay police for traffic violations in southern Brevard County that led to the most recent officer-safety advisory before his death.

Paffen worked nearby at Diamond Precision Machine and was pulled over for driving with a suspended license after failing to use his turn signal and driving 49 mph in a 45-mph zone.

When asked if he had any guns in his pickup, Paffen said there was one in his backpack but none on him. After Paffen was told to get out of the truck, a second Palm Bay police officer noticed a small pistol in his right rear pants pocket while he held his right hand inches away, records show. The cops grabbed Paffen and handcuffed him.

Paffen told police he forgot about the palm-size pistol and magazines in his pockets. He was charged with carrying a concealed weapon and driving with a suspended license and his pickup was seized for civil forfeiture. The case was pending when Paffen died.

Previous Article
Lithuanian Fascists March Near Holocaust Execution Site Of 10,000 Jews
Next Article
New Video Evidence of America’s Coup in Ukraine — and What it Means 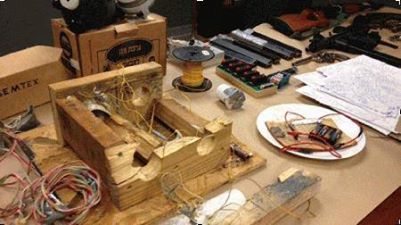