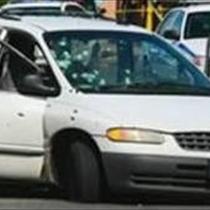 (West Memphis, AR 5/20/2010) We're digging deeper into the suspects behind today's shootout in West Memphis that killed two police officers and wounded two more. Initial police broadcasts identified the van the men were traveling in as belonging to a church in southern Ohio. On Your Side Investigators learned it's a church with a controversial history including ties to white supremacy.

The white minivan now sits rammed and riddled with bullets. The two men inside were shot and killed during a gun battle with police.

Until his death in 2003, locals say the national director of the Aryan Nations, Harold Ray Redfearin, was affiliated with House of God's Prayer.

"What I know about it was an Aryan Nation church," explained local business owner Gary Evans. "It didn't seem to fit in to a small farming community like New Vienna." ...

... The van involved in Thursday's shooting was registered to the House of God's Prayer at 143 West Main Street in New Vienna.  Clinton County, Ohio records show the New Vienna property owned by the Universal Life of the Good Shepherd Church.  It has an address 50 miles away in Middletown, Ohio.

Butler County records show the Middletown property owned by Hoge and Mary Tabor.  A man named Hoge Tabor from Ohio is mentioned in a book about the Aryan Nation.  Tabor told WMC-TV's sister station WXIX-19 in Cincinnati on the phone that he owns the New Vienna property, but then hung up.

The van sat in a Walmart parking lot in West Memphis for the entire day and part of the night Thursday as officers continued to investigate the scene.

The slain officers were Brandon Paudert, 39, and his partner Bill Evans, both with the department's drug interdiction unit.

The officers are believed to have been shot with what Arkansas State Police described as a "long rifle" and a handgun. One witness at the scene says she saw a body in uniform lying in the middle of Interstate 40.  ...

At left, a photo of Joe and Jerry Kane from a memorial website dedicated to the two. On the right, a photo of one of the suspects in the killing of two West Memphis police officers Thursday, who relatives have identified as 16-year-old Joe Kane.

Several people claiming to be relatives and friends of the suspects killed in Thursday’s shootings in West Memphis have identified them as Jerry Kane, 45, and his 16-year-old son, Joseph, although authorities investigating the incidents still have not released positive IDs.

The Commercial Appeal could not gain independent confirmation that Jerry and Joseph Kane are the suspects that Arkansas State Police say are responsible for killing two members of the West Memphis Police Department -- Sgt. Brandon Paudert and officer Bill Evans -- after a routine traffic stop and later wounding the Crittenden County Sheriff Dick Busby and his chief deputy, W.A. Wren, before being killed in a shootout.

People claiming to be relatives of the two, however, told The Commercial Appeal they could identify them from numerous videos and photographs taken at the crime scene and available on Memphis media websites. They identified the men as Jerry Kane, 45, of Ohio and his 16-year-old son, Joseph. The website promoting Jerry Kane’s seminars on foreclosures had a note Friday morning indicating the two were "shot down" by law enforcement in West Memphis.

That website contains writings and links to audio and video in which Jerry Kane espouses strong anti-government sentiments. In one recording, he talks about New Mexico police arresting him at a “Nazi checkpoint where they were demanding papers or jail.” In a video, he and his son joke about using a bat to “take care of” a problem with an IRS agent.

Information on that site led to a woman named Donna Lee, who said she is Jerry Kane’s common-law wife and that Joseph Kane is her stepson.

Lee said the white Plymouth Voyager minivan belonged to Jerry and was positive from photos and videos from the scene that the two unidentified dead suspects were Jerry and Joseph Kane -- and that the dog she saw exiting the white minivan in videos was a Labrador-Rottweiler mix named Olie. She claimed that another dog, Little Missy, also traveled with Joseph and Jerry, who crisscrossed the country giving seminars on foreclosures and what they call “mortgage fraud”.

Officials with the West Memphis animal shelter confirmed that another dog was found dead in the van, a fact police had not made public.

Lee also said that Joe’s mother died three years ago and said her name was Hope. A background check of Jerry Kane shows that he had been married to a woman named Hope.

Lee said Jerry Kane owned an AK-47 and carried it with him on trips because he liked taking it to local shooting ranges.

"Yes, we had an AK-47, but we've taken it down to the local shooting range and shot it but there were other people there with those big sniper rifles," she said.

"They were literally staying in hotels all over the country so they could help people stay in their homes," Lee said.

Another man, Jake Jefferson, said he was a nephew of Jerry Kane's and said he was positive that the dead person he saw in news accounts was 16-year-old Joe Kane, that the white minivan had belonged to Jerry for some time and they traveled the country helping people with mortgage and foreclosure issues. He also said he recognized the dog, and that Jerry and Joe had spent a month with him at his home in the Phoenix area over Christmas.

Jerry Kane was arrested April 10 in Lincoln County, New Mexico, for concealing his identity and driving with a suspended/revoked driver’s license, said Walter Beall, chief of security for the sheriff’s office. Kane was released two days later after posting $1,500 bond. No disposition was available.

In an Internet broadcast dated May 6, Kane details how he was arrested in New Mexico, and his language suggests he did not trust authorities.

"I ran into a Nazi checkpoint in the middle of New Mexico where they were demanding papers or jail," Cane says. "That was the option, either produce your papers or go to jail. So I entered into commerce with them under threat, duress or coercion. And spent 47 hours in there. They made Donna Lee come in and post bail -- pay a ransom -- to get me out, which was 1,500 bucks. Everything I signed was by grantor no contract."

The Internet company that hosted a website devoted to Jerry Kane's business published a memorial page that says "Jerry Kane & Joe Kane. Father and son killed in W. Memphis." At the top of the site it says, "Funds are now needed to bring Jerry and Joe back to Florida and for their funeral costs."

News videos of the incident are embedded onto the site and prominent messages from those who appear to have known them.

A message from someone identified as Jaime says: "We will miss Jerry and his son Joseph for the love and compassion that they shared with their fellow man and for their tireless contributions and effort in helping those in need. Our condolence and our love go out to Jerry's newlywed wife, Donna Lee. We also prey (sic) for the families of the police officers who were injured and killed in today's (5/20/2010) unfortunate shooting incident and we pray that no one should ever have to go through this type of experience ever again.”

A message signed by someone named Angela says: "I first met Joe Kane when he was 14. He was a sweet, loving young man with a charming demeanor and a warm smile. Joe had a a brilliant mind and quick wit, like his Father. … Jerry and Joe were cleancut and admired by everyone that made their acquaintance, not only for their knowledge and understanding of the foreclosure scam, but for their moral etchics (sic) and integrity. Together they educated the people about the Mortgage Fraud and how to fight to keep their homes. Joe adored his father and was always at his side.”

Other material on the website promoting Kane’s foreclosure-advising business displays classic rhetoric some experts say is associated with anti-government groups.

On the site, http://privateaudio.homestead.com/Jerry-Kane.html, Kane and his son are seen in a video wearing white suits and heading a financial seminar. Topics discussed on the site include microchips inserted into people’s bodies, plots involving the H1N1 vaccine and the contention that U.S. dollars don’t constitute real money.

In a YouTube video purported to be from an Aug. 2, 2009, all-day seminar in Fontana, Calif., Jerry Kane discusses his views on violence after a question about a “rogue” IRS agent.

In the discussion about the IRS agent, a laughing Joe Kane said he would deal with the agent himself.

“If you pay for the bat, I’ll take care of the problem,” he said.

Later, the son describes his view on violence. “They drew first blood. You are self-defending.”

His father then asks of the audience: ”Can anybody tell that my son has never been to school? … He slipped though the cracks.”

Potok said a check of the Southern Poverty center’s databases found no mention of Kane, but that he clearly was at least influenced by rightwing organizations.

“Without question, Jerry Kane was mouthing some of the core ideas of anti-government, Patriot movement,’’ Potok said. “...Clearly the father was involved in the Patriot movement.’’

Meantime, the white van that Kane was driving during yesterday’s shootout was registered to a New Vienna, Ohio, organization called House of God’s Prayer.

Potok said he spoke this morning with a former FBI informant who says the building where the church was housed also once served as the headquarters for the Aryan Nations, a white supremacist group.

“That was an incredibly violent bunch of people up there,’’ Potok said.

Potok said he spoke with former FBI informant Dave Hall, who with FBI agent Tym Burkey, wrote the 2008 book, Into the Devil’s Den: How an FBI Informant Got Inside the Aryan Nations and a Special Agent Got Him Out Alive.

Jerry Kane’s wife, Donna Lee, rejected any suggestion that Jerry and Joe held racist views. She said Jerry Kane tried "to help everyone, it did not matter what their color, or if they were striped or anything."

The House of God’s Prayer was also associated with a deceased white supremacist named Harold R. Redfeairn, who the Associated Press reported in 2003 headed a chapter of the Church of Jesus Christ Christian in New Vienna. That church espoused views of the white-supremacist doctrine of Aryan Nations.

A story published by the Southern Poverty Law Center in Montgomery, Ala., on Redfeairn has the headline, "The Cop-Shooter." The story said that in 1979, Redfeairn shot 22-year-old Dayton, Ohio, police officer Dave Koenig three times after Koenig had stopped him.

It was unclear whether Jerry Kane knew Redfeairn, and Lee said it was "ridiculous" that Kane would associate with "terrorists." She said Kane knew a pastor in Ohio who helped people who had been incarcerated.

Why No Right Wing Outrage Over "Terrorist Kane?"

Posse Comitatus, the Sovereign Movement and the Fall of Irwin Schiff