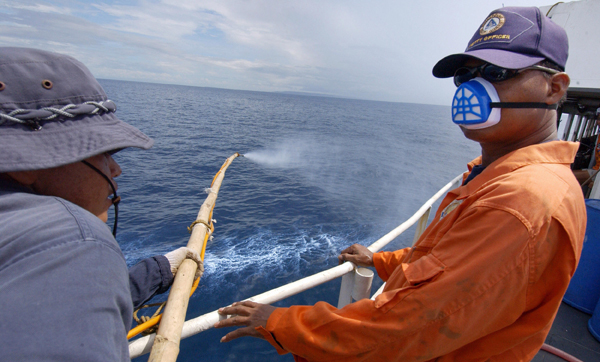 Independent toxicologists issue warning: We object to the FDA Claim that chemical dispersants have a low potential for accumulating in seafood and do not pose a public health concern.

“Independent analysis by toxicologists dispute FDA claims made in the last few days that chemical dispersants used by BP during the oil catastrophe may not accumulate in seafood.

“In fact, in a full report by Dr. Bill Sawyer released today, there is a grave problem caused by dispersants, due to the fact that these were used in deep waters and on such a vast scale.

“Studies of other spills show that the toxic components of crude oil ‘bioaccumulate’ into the food chain and become highly toxic to marine reproduction and harmful when consumed by humans, even when dispersants are applied at the surface and the chemical toxins may be sufficiently diluted over time to pose only minimal risks.

“However, BP’s use of dispersants deep underwater in the Gulf, and on such a vast scale, represents the first time dispersants have been used in this manner. The greatly-reduced biodegradation in the DEEPWATER HORIZON case, resulting from lack of sunlight, extreme cold temperatures at 5000 feet, and other environmental factors significantly reduce the rate at which the dispersed crude components are degraded.

“Eight months would be required to remove 96 percent of the petroleum under ideal conditions, thus we can only assume what remains in the Gulf waters will be a ‘toxic soup’ of chemicals for the foreseeable future, due to the worst-case scenario which has unfolded.

“The most potentially dangerous of the components in the Gulf’s toxic soup are ‘polynuclear aromatic hydrocarbons’ (PAHs), dangerous cancer-causing chemicals which slowly break down after being ingested by marine life, persist in marine organisms and can be passed to both humans and other wildlife through consumption.

“PAHs are not contained within the dispersants used, but rather, have been extracted from the BP crude and suspended in the water column via dispersant use.

“It must also be noted that the deep water National Oceanic and Atmospheric Administration Weatherbird analyses and our own near shore water, tunicate and beach samples have revealed a consistent pattern of dispersant-induced C19-C36 hydrocarbons and PAHs. Unfortunately, these specific PAHs are of the most toxic variety. Clearly, analyses of seafood in impacted regions require additional testing for PAH uptake protective of human carcinogenic potential.

“It is important that the public be vigilant and educate itself to these risks, as further compounding this misinformation from FDA are published news reports which show the government trying to discount university studies about the toxicity of the Gulf water column and seafood, and denying the continued use of dispersant spraying off the coast of Florida.”

The War Over Fracking in California has just Begun
Jun 25

The War Over Fracking in California has just Begun