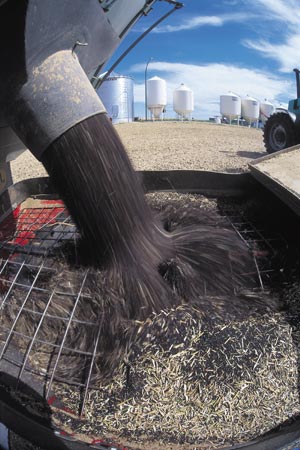 The agribusiness giant Monsanto was rebuffed in a ruling handed down yesterday by the European Court of Justice over the company’s patented Roundup Ready technology. (Monsanto’s patented DNA enables plants to resist the herbicide glyphosate, allowing farmers to spread the weed-killing chemical widely without damaging crops.) A nine-judge panel rejected some broad legal claims made by the company, saying that its patent applies only to live plants—not to derived products such as soy meal, as the company had argued.

Observers see the ruling as the first significant test of the European Union’s decade-old “biotechnolgy directive,” a policy statement that backed DNA patents in principle. The Court of Justice, which holds sway in the 27 countries of the European Union, is now telling courts that they must read such DNA patents quite narrowly. But the court is also “sending out a very strong signal” that it supports DNA patents and that they are enforceable, says Jonathan Radcliffe, an attorney who handles drug, biotech, and other technology litigation at the London-based firm Nabarro LLP.

Monsanto initially filed suit in a Dutch court after finding traces of its proprietary DNA in soy meal imported from Argentina to the Netherlands in 2005 and 2006, asking that the imported meal be seized. (Argentina grows Roundup-Ready soy beans but does not recognize Monsanto’s patent or pay for its use.)

The Dutch court requested a ruling on the law. The result was the opinion given yesterday by the Court of Justice, based in Luxembourg, which said that Monsanto’s patent was solid but limited. It does not cover “dead material,” the judges wrote, only live plants. Patent protection, the court found, “is not available when the genetic information has ceased to perform the function it performed in the initial material from which the material in question is derived.”

The ruling comes after a partial retreat by Monsanto. Last month, Monsanto withdrew the suit in the Dutch court and settled the case with soy meal importers after a preliminary ruling earlier this year signaled that it was likely to lose the case. The higher court decided to give its opinion anyway.

Some observers said they were not surprised by the outcome. Daniel Kevles, a Yale University historian of technology, wrote in an e-mail: “Monsanto has long pursued aggressive and often intimidating enforcement of its patents on genetically modified plants. … It overreached with its claim to rights in the soy-bean meal. Its claim made no more sense than if, say, the designer of a process used to produce a microchip were to demand a royalty on every smart phone in which the chip is used.” He described the defeat in the Court of Justice as “well-deserved.”

In a statement released yesterday, Monsanto said an estimated 95% of the soybeans grown in Argentina contain the Roundup Ready genetic trait. “For many years,” Monsanto said, “Argentine growers used the technology extensively without paying for it.” The company claims that it “simply wanted to be paid for the use of our technology.” The Court of Justice ruling, Monsanto claims, is “very limited and will have no impact” on the company’s global Roundup Ready soybean business.