Scientific American Genetically Modified Crop on the Loose and Evolving in U.S. Midwest 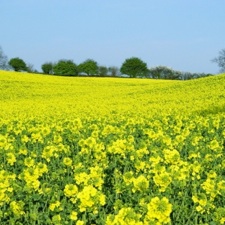 Outside a grocery store in Langdon, N.D., two ecologists spotted a yellow canola plant growing on the margins of a parking lot this summer. They plucked it, ground it up and, using a chemical stick similar to those in home pregnancy kits, identified proteins that were made by artificially introduced genes. The plant was GM—genetically modified.

That's not too surprising, given that North Dakota grows tens of thousands of hectares of conventional and genetically modified canola—a weedy plant, known scientifically as Brassica napus var oleifera, bred by Canadians to yield vegetable oil from its thousands of tiny seeds. What was more surprising was that nearly everywhere the two ecologists and their colleagues stopped during a trip across the state, they found GM canola growing in the wild. "We found transgenic plants growing in the middle of nowhere, far from fields," says ecologist Cindy Sagers of the University of Arkansas (U.A.) in Fayetteville, who presented the findings August 6 at the Ecological Society of America meeting in Pittsburgh. Most intriguingly, two of the 288 tested plants showed man-made genes for resistance to multiple pesticides—so-called "stacked traits," and a type of seed that biotechnology companies like Monsanto have long sought to develop and market. As it seems, Mother Nature beat biotech to it. "One of the ones with multiple traits was [in the middle of] nowhere, and believe me, there's a lot of nowhere in North Dakota—nowhere near a canola field," she adds.

That likely means that transgenic canola plants are cross-pollinating in the wild—and swapping introduced genes. Although GM canola in the wild has been identified everywhere from Canada to Japan in previous research, this marks the first time such plants have been shown to be evolving in this way. "They had novel combinations of transgenic traits," Sagers says. "The most parsimonious explanation is these traits are stable outside of cultivation and they are evolving."

Escaped populations of such transgenic plants have generally died out quickly without continual replenishment from stray farm seeds in places such as Canada, but canola is capable of hybridizing with at least two—and possibly as many as eight—wild weed species in North America, including field mustard (Brassica rapa), which is a known agricultural pest. "Not only is it going to jump out of cultivation; there are sexually compatible weeds all over North America," Sagers says. Adds ecologist-in-training Meredith Schafer of U.A., who led the research, "It becomes a weed [farmers] can't control."

There has been no evidence to show that the herbicide resistance genes will either increase or decrease fitness to date. The finding provides, however, a warning for future genetic modifications that might increase fitness in all kinds of plants; it will be difficult to keep those traits on the farm and out of the wild. "The big concern is traits that would increase invasiveness or weediness, traits such as drought tolerance, salt tolerance, heat or cold tolerance" says weed scientist Carol Mallory-Smith of Oregon State University—all the traits that Monsanto and others are currently developing to help crops adapt to climate change. "These traits would have the possibility of expanding a species' range." In the case of canola, consider it done—at least in North Dakota.

This is not the first transgenic crop to escape into the wild in the U.S.; herbicide-resistant turf grass being tested in Oregon spread as well in 2006. And GM canola is not a regulated plant, "therefore no protocols are required by the regulatory agencies to reduce or prevent escape," notes ecologist Allison Snow of The Ohio State University. "The next question is: 'So what?' What difference does it make if the feral canola or any species that hybridize with it have two transgenes for herbicide resistance?"

Canola modified to resist either the herbicide glufosinate (brand name Liberty) or glyphosate (brand name Roundup) has been available in the U.S. since 1989—and unregulated since 1998 and 1999, respectively for the two herbicides. "These results are not new for Canadian researchers and to be expected if two types of transgenic herbicide-resistant canola are commercially grown," says Suzanne Warwick of Agriculture and Agri-Food Canada, a government agency.

A common source for GM canola in the wild is seed that has scattered during harvest or fallen off a truck during transport. "Because about 90 percent of the U.S. and Canadian canola crop is biotech, it is reasonable to expect a survey of roadside canola to show similar levels of biotech plants," said Tom Nickson, environmental policy lead at Monsanto, in a prepared statement.

Nor does Monsanto claim ownership of the escaped plants, even those with multiple transgenes, according to company spokesman John Combest. "It has never been, nor will it be, Monsanto policy to exercise its patent rights where trace amounts of our patented traits are present in fields as a result of inadvertent means," although researchers would have to obtain a license from the company to work with the GM plant.

It remains to be seen how much sexual mingling such transgenic plants do; U.A.'s Sagers plans to do greenhouse trials starting in a few weeks. But it does provide a compelling example of how genes might move through a given population. "This is a good model for the influence of agriculture on the evolution of native plants," she says. "We can imagine gene flow to native species. If we can imagine it happening, it probably happens."