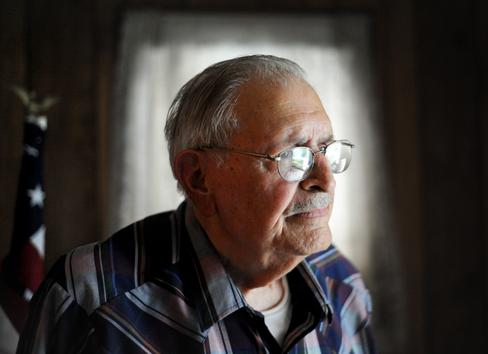 Lewis Reynolds was sterilized at the Lynchburg Training School at age 13. A doctor wrote that the procedure “will take a big burden off him in the future.” He married, but he and his wife never had children.

Not all of the people who were sterilized during Virginia’s eugenics program were feeble-minded. Lewis Reynolds, a Lynchburg resident and 30-year veteran of the Marine Corps, is one of them.

Reynolds, who suffered from epilepsy as a child, was given a vasectomy at age 13 at what is now the Central Virginia Training Center in Madison Heights. A doctor wrote that the procedure “will take a big burden off him in the future.” Reynolds wasn’t sure what was being done to him. But he knows the result.

“Sometimes I cry when I see a lady pregnant or something like that. I always wanted children and never could have them,” he said recently. “Sometimes I get off by myself and cry.”

An advocacy group called the Christian Law Institute hopes Reynolds can help it persuade Virginia to make symbolic payments to surviving victims of the misguided science of eugenics, which developed in the 1920s in the belief that people with mental disabilities shouldn’t be allowed to reproduce.

A majority of the victims, male and female, were sterilized in the Madison Heights institution known in that time as the State Colony for Epileptics and Feebleminded. Mark Bold, the Lynchburg-area spokesman for the advocacy organization and its executive director, said Reynolds “is somebody that has an incredible story to tell, with some photos as well. He’s impressive and articulate.”

Bold said the group is calling on Gov. Bob McDonnell to establish a task force to identify victims of sterilization and “determine the appropriate method of compensation.”

The Christian Law Institute has an ally in Del. Patrick Hope, D-Arlington, who has called on Gov. Bob McDonnell and the General Assembly to provide “a symbolic payment to the victims who are still alive.” Bold and the law institute have contacted several survivors in the Lynchburg area since they went public with their campaign a month ago. Reynolds called The News & Advance after reading about the potential payments. The response from public officials has been circumspect, with a McDonnell staffer reciting this comment from the governor last week: “Sterilization was a horrific and unconscionable policy. The governor will review this legislation after it is introduced,” said Jeff Caldwell, a spokesman for McDonnell.

State Sen. Steve Newman, R-Lynchburg, had a staff member tell The News & Advance that Newman had supported then-Gov. Mark Warner’s official apology to sterilization victims in 2002. “However, he does not tend to believe that reparations are a path the Commonwealth is likely to entertain as they may set a precedent for other similar requests. No amount of funds will be able to undo the harm that took place to individuals,” said the statement relayed by Newman aide Patti Dempsey.

Del. Ben Cline, R-Rockbridge County, whose district includes Amherst County, did not respond to requests for comment. Del. Matt Fariss, R-Campbell County, also relayed a message through a staff assistant, saying, “it will be interesting to see how this effort to compensate former residents who were sterilized almost half a century ago unfolds.”

“The specifics will likely be discussed in hearings during the upcoming session of the General Assembly in 2013. Delegate Fariss reserves his ultimate decision on whether or not it would be a valid use of state funds” to compensate the victims, the statement said.

Except for limited schooling, cut short by childhood seizures, the 85-year-old Reynolds has lived a fairly typical life. He joined the Marines, fought in the Korean War, and served during the Vietnam War. He became a licensed electrician later in civilian life, and still does an occasional electrical job. He also was married. Twice.

“I fought under General MacArthur,” said Reynolds, who reached the rank of sergeant.

“I would take a bunch of men, go over to the north, find out where them people were, and set up everything so we could bomb them,” Reynolds remembers.

During his time in Korea, Reynolds received a dear-John letter from his first wife. One reason she gave for leaving him was his inability to have a family. Later, he married Deloris Layne of Lynchburg, after beginning a courtship at the Lynchburg Hosiery mill where she worked, and where he had previously worked in his late-teen years. Reynolds said he suggested they adopt children, but she refused. “She said, ‘if I can’t have my own, I’m not going to have somebody else’s children and be responsible for them,’” Reynolds said.

Deloris Reynolds died in 2007, after they had been married 47 years. “She was a good Christian woman,” Reynolds said, adding that they both sang in their church choir.

Reynolds has a clear memory of how and why he was sent to live “over there,” meaning the Madison Heights institution. Reynolds had been having seizures since he was about 3 years old, after an older cousin hit him in the head with a rock when they were playing. “My daddy was doing some plumbing work over there” in the summer of 1941, Reynolds said, and mentioned the seizures to Dr. George B. Arnold, superintendent of the Lynchburg State Colony, the name the institution had been given in 1940. “Dr. Arnold told daddy to put me over there so he could look after me,” Reynolds said.

The institution’s doctors initially evaluated Reynolds, then 12, as a “fairly normal, intelligent boy,” according to records that Reynolds obtained recently from the Central Virginia Training Center. The documents show he was admitted to the “Colony” on Aug. 21, 1941, and had two epileptic seizures within the first few months.

“He should make a rather well-behaved patient once he becomes adjusted to institutional life. Sterilization, of course, is indicated,” a doctor wrote in the records on Aug. 25, 1941, four days after Reynolds was admitted.

Only the doctor’s initials, TSH, appear in the record.

Six months later, on Jan. 30, 1942, this note stands in the record: “Patient was sterilized today.” Reynolds was released to his mother’s care, on what the records describe as “parole,” three weeks later. He remained officially a patient of the training center until his discharge on May 18, 1945. But according to the records, he spent nearly three of those four years on parole, living with family members in the community.

Bold called the institution’s reasoning process “pretextual,” meaning that patients were told there were unable to take care of themselves. “But it’s interesting that as soon as they submit to sterilization they let them go,” Bold said.

Bold said Reynolds “was not only a veteran of two wars, but also the veteran of domestic war – a state-funded war waged against him, and thousands like him. “This eugenics war was the quintessential attack aimed against his reproductive rights and his posterity, based on an evil social philosophy,” Bold said.

Reynolds said he still wishes he could have been a father. “Sometimes when I go to church and see kids running around, I’ll give them a dollar,” he said. “All my brothers had kids,” Reynolds said. “But I did come out” to have a life after the institutional experience. I served my country in two wars and everything,” Reynolds said.

Virginia’s 1924 eugenics law authorized forced sterilizations under the misguided science of eugenics — selective human breeding and social engineering. The U.S. Supreme Court upheld the law in its 1927 Buck v. Bell decision. The practice continued until the 1970s and resulted in as many as 8,000 forced sterilizations, many of them occurring at the Central Virginia Training Center in Madison Heights. Then-Gov. Mark Warner issued a formal apology for the practice in 2002.