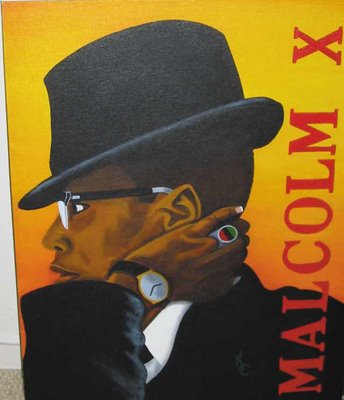 " ... On February 21, 1964 in front of a crowd in the Audubon Ballroom in New York City, Malcolm X was shot to death by three men. Labeled as angry NOI members, the three were convicted with Malcolm’s death. However a host of suspicious events and contradictory information presented at the trial have led many to speculate whether more sinister forces, namely the US government, may have been behind his death. The only acquaintance of Malcolm to attempt to prove this point immediately following death, Leon Ameer, died of a sleeping pill overdose before his case could be presented. ... "

http://africaresource.com/index.php?option=com_content&view=article&id=221:malcolm-x&catid=profiles&Itemid=352
•••••••
From: "Who Killed Malcolm X?"

" ... Leon Ameer was an associate of Malcolm X and a leader of his Organization of Afro American Unity. In March of 1965 he stated, "I have facts in my possession as to who really killed Malcolm X." referring to the Chicago headquarters of the Nation of Islam, he declared, "the killers aren't from Chicago, they're from Washington."

Ameer said he would hold a press conference and release the incriminating documents and audio tape that he claimed to possess. The next day, he was found dead in his Boston hotel room. Police stated that he'd died of an epileptic seizure, despite his wife's assertion that a recent doctor's exam had shown whether or not they had a role in the assassination, government officials certainly considered Malcolm X a threat, one to be watched and controlled. The FBI had begun monitoring Malcolm X as early as 1953 ... "

... One of Malcolm's top aides, Leon 4X Ameer, went to the FBI, about, I think it was ten days after Malcolm was killed, and indicated that he felt that there were elements not only within the Nation of Islam proper, but within the US government that were behind Malcolm's assassination. He then was found dead, himself, a few days later at the age of 32 in his apartment in Boston.

Initially, they said it was suicide, then they changed that to a drug overdose, but the final disposition of the case was that he died of natural causes, despite the fact that he was in good health at the age of 32.

It is worth noting that Ameer took his wife and child and relocated them from Boston prior to his death, because he felt that his life was in danger and he did not want his wife and child to die if and when the assassins came for him. That is still the official version of the death of Leon Ameer, namely, natural causes at the age of 32 within ten days of (actually it was about a week) having visited the FBI and voiced his suspicions about U.S. governmental involvement in the assassination of Malcolm X. ...

... The only person who admitted being hired to eliminate Malcolm X, Talmadge Hayer, stated he was not a member of the Nation of Islam and "that the man who hired him was not a Muslim" either, according to The Assassination of Malcolm X. The book also reported the following three incidents that occured 40 years ago in the days after Malcolm X's killing:

1. On February 25, 1965, four days after the assassination of Malcolm X, Boston Organization of Afro-American Unity (OAAU) head Leon 4X Ameer said "Nobody believed Malcolm X when he said his life was in danger and now I am in the same predicament;"

3. On March 13, 1965, Boston OAAU head Leon 4X Ameer mysteriously died of an overdose of sleeping pills in Boston after he had "just announced plans to produce tapes and documents of Malcolm's proving the government was responsible for" Malcolm's assassination. ...