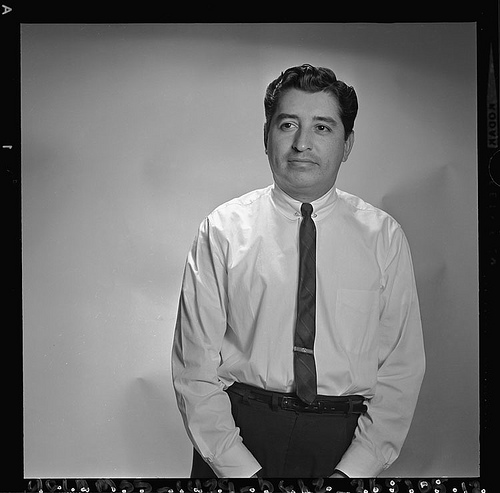 Two Mexican cousins are killed by Los Angeles police in a case of mistaken identity. A prominent journalist is cautioned by two LAPD officers about his coverage of the shootings. A short time later, the journalist meets with staffers of the U.S. Civil Rights Commission and tells them he is being followed. He gives his Rolodex of news sources to a colleague and clears his desk. Days later, at the age of 42, he is dead. Killed by a 10-inch-long tear-gas projectile fired by a Los Angeles Sheriff's deputy.

Is this the plot for a crime thriller? It could be. But it is just part of the tragic mystery surrounding Ruben Salazar. The Los Angeles Times columnist and KMEX news director was killed 40 years ago Sunday under very disturbing circumstances. Law enforcement officials had a chance to resolve the matter at that time but dropped the ball. A new generation of law enforcement officials now has a chance to come clean by releasing all records relating to the case. For the sake of history and transparency, they must not fumble this opportunity.

I first heard of Ruben Salazar in early 1970 when a friend mailed me a few of his columns. I was in the Army in Japan at the time. I was impressed by Salazar's insight as he explored the often-misportrayed Chicano movement and issues involving education and justice. Salazar was the first Mexican American columnist for a major U.S. newspaper, following his career as Times reporter and foreign correspondent. For me, a young Mexican American during an era with few minorities in the news media, he became an inspiration. I vowed to go to Los Angeles and meet him.

On Aug. 29, 1970, I ended my military service at Oakland Army Base and looked forward to a job interview at The Times. Little did I know that on that same Saturday afternoon, Salazar would be killed. Though I never got to meet him, I have continued to celebrate his journalistic work and ponder his death.

A basic question haunts me, just as it disturbs Salazar's children and many others. Was the fatal shooting of Salazar just a horrible accident that occurred under riot conditions nearby? That was law enforcement's verdict. Or was Salazar assassinated to silence his reporting and the work of his KMEX news staff? That is what some Mexican Americans who were politically active at the time believe.

I don't know the answer to that enduring mystery. Even the release of all relevant official documents may not provide a definitive answer, but such action will show that today's officials have nothing to hide about a 40-year-old case.

In February of this year, Thomas A. Saenz, president of the Mexican American Legal Defense and Educational Fund, filed a California Public Records Act request to Los Angeles County Sheriff Lee Baca on behalf of filmmaker Phillip Rodriguez and himself. In March, the Los Angeles Times also made a request for the Salazar files. In early August, Baca balked at releasing the eight boxes of department materials. But after some friendly persuasion from Supervisor Gloria Molina, Baca has now given the records to the Sheriff Department's Office of Independent Review. The staff, led by Michael Gennaco, will prepare a report on the contents of the Salazar files.

That's a good start. But for the sake of historical record, all of the Sheriff's records relevant to Salazar's death should be made public. Beyond that, any relevant files from the District Attorney's office, the LAPD and federal Justice Department agencies should also be made public.

"Let the chips fall where they may," Molina said in an interview. "We have a very different Sheriff today. For those who are nervous about what would come out, I think they will have to grin and bear it because that was the reality of the day."

Lisa Salazar Johnson, the oldest of Ruben's three children, said: "I am urging Sheriff Baca to release those files because there are so many questions. I want to know why I had to live without a father."

Salazar died on a day that began with a large, peaceful march in East Los Angeles in protest against the Vietnam War and the disproportionate number of Mexican Americans being drafted and dying on the battlefield. The protest drew an estimated 25,000 Mexican Americans from across the Southwest, including young people who have since become leaders in politics, education and other fields.

After the marchers reached Laguna Park, a small group caused trouble at a nearby liquor store. When deputies responded, they were pelted by rocks and bottles. Things got chaotic. Tear gas was fired at the main crowd of demonstrators, which included elderly parents and young children. In a grainy scene recorded on film, a young woman flings a stone toward the authorities and gets clubbed by a deputy in the back of the head. Protest organizers later said that police had looked for any pretext to break up the event. Almost everyone went home, disappointed that they did not have a chance to express their disapproval of the war.

"All of us had lost friends in the war," said Molina, then an East L.A. College student, who had left Laguna Park before the trouble erupted. "I was as angry as anyone about that war."

Some young demonstrators responded violently, looting and burning businesses along Whittier Boulevard in L.A.'s worst disturbance since the 1965 Watts riots. Law enforcement moved in with strength. Before it was over, property damages would exceed $1 million, and dozens would be injured or arrested. Three people would die.

Salazar had been covering the day's events for KMEX. A colleague, Guillermo Restrepo, later said that Salazar suspected they were being followed that afternoon. They went to a dingy bar to take a break and have a beer. Its location, 22 blocks from Laguna Park, seemed far removed from the rioting at the time. Sheriff's deputies, however, suddenly appeared outside the Silver Dollar bar, located on Whittier Boulevard in unincorporated East L.A. The deputies went there, they later said, because a man told them of two men inside the bar with guns. Deputy Thomas H. Wilson fired twice into the establishment. But he used an unusual weapon: a torpedo-shaped tear-gas projectile that was designed to pierce wooden doors and to expel barricaded suspects. Yet, the Silver Dollar's door was open, with only a small curtain hanging from the top. Salazar, the Sheriff's Department said, was hit in the temple by a shell and died. The department, then led by Sheriff Peter Pitchess, insisted that it was just an unfortunate accident.

In the months before, then-LAPD chief Ed Davis had complained vigorously to the Times' leadership about Salazar's columns. Two police officers had talked to Salazar about KMEX reports about the fatal police shootings of the two unarmed Sanchez cousins, both Mexican nationals. The officers, Salazar wrote in his column, "warned me about the 'impact' the interviews would have on the police department's image. Besides, they said, this kind of information could be dangerous in the minds of barrio people."

All these events unfolded during J. Edgar Hoover's reign at the FBI and Richard Nixon's residence in the White House. It was a period when law enforcement across the nation took particularly harsh action against antiwar protesters and initiated surveillance of what they called revolutionary or subversive elements. Those circumstances have fed conspiracy theories, but by themselves, they are inconclusive.

One thing is clear: Salazar was no revolutionary, but he believed that his role as a journalist involved exposing cases of discrimination and injustice. He also gave credit to law enforcement when credit was due.

Los Angeles public officials had a chance to resolve questions about Salazar's death. But instead, a rarely used proceeding was ordered - a coroner's inquest. The hearings made for good theater - they were broadcast live on L.A. television - but they were a farce. Much of the questioning tried to link protest organizers to leftist causes. Wilson testified that he wanted to get the tear gas quickly into the bar because of the armed men believed inside and that he had aimed for the ceiling. After 16 days of hearings, four members of the inquest jury concluded that Salazar had "died at the hands of another." Three others found the death to be an accident. The murky findings frustrated those seeking clarity about the case.

A week after those hearings, District Atty. Evelle Younger washed his hands of the case, saying he would not prosecute Wilson. Younger was running for state attorney general and it seems clear to me that he did not want to go against "law and order." Younger, who died in 1989, rejected those allegations when they were first raised. At the same time, U.S. Justice Department officials failed to pursue any federal charges. To some activists, law enforcement's collective non-action smelled of a cover-up, but Mexican Americans carried little political clout in 1970. Unlike today, there were no Latinos on the L.A. City Council or county Board of Supervisors. Nationally, Mexican Americans were dismissed as a small regional minority and were not a force.

Officials in Los Angeles, Sacramento and Washington now have the chance to set the record straight by releasing unredacted copies of local, state and federal law enforcement records. Some FBI records previous released under FOIA requests have had large sections blacked out "for national security reasons."

"I don't want to believe that Ruben was targeted," Molina said, "but I do know that law enforcement followed a pathway that was very anti-Chicano."

Molina said the records dealing with the Sheriff Department's handling of the events at Laguna Park should be disclosed too. "It was a terrible time," she said. "The full information needs to come out for those events to be appropriately portrayed."

For too long, what happened at Laguna Park and the Salazar case have been considered only of local interest. Rodriguez, whose documentaries have aired on PBS, believes the case is significant nationally, just as it has been important to resolve cases involving civil rights abuses in the South during the 1960s.

Rodriguez, a visiting fellow at USC's Annenberg School for Communication & Journalism, is making a film on Salazar. "I have no preconceived ideas about what led to Salazar's death," he said, "but I do know how profoundly painful this episode has been for many people. It's time to give scholars and journalists access to those files."

This sad chapter of U.S. history needs some resolution that only complete transparency can bring.

Frank O. Sotomayor is a senior fellow at the Institute for Justice and Journalism and an adjunct faculty member at the USC Annenberg School for Journalism. He was an editor at the Los Angeles Times editor for 35 years, including 18 years as an assistant metro editor. He was co-editor of the Times series "Latinos in Southern California," which won the 1984 Pulitzer Prize for Public Service. Sotomayor was a co-founder of the Maynard Institute for Journalism Education, the California Chicano News Media Association and the National Association for Hispanic Journalists. He authored "Para los Niños, Improving Education for Mexican Americans" and co-edited the book "Frank del Olmo: Commentaries on His Times."