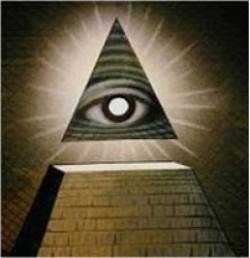 Over the years, I've noticed that "mainstream" media, with a sniff of superiority, misrepresent and ridicule anyone researching political conspiracies - but without so much as an apology, will launch into their own half-baked theories as if they are sharing the wisdom of Moses. We all know the Nazi "Big Lie." We've heard this one ad nauseum, but every time the "Big Lie" is discussed, it's as if the author has just made an important discovery and is letting us in on something. And here it comes yet again - suddenly, the Times (itself a Mockingbird propaganda front that lies often and very destructively, even supported Nixon) reads like David Icke or Alex Jones:

Behind the sordid memos that purported to give legal justification for the war on terror.

... How did such dangerously bad legal memos ever get taken seriously in the first place?

One answer is suggested by the so-called Big Lie theory of political propaganda, articulated most infamously by Adolf Hitler. Ordinary people "more readily fall victim to the big lie than the small lie," wrote Hitler, "since they themselves often tell small lies ... but would be ashamed to resort to large-scale falsehoods. It would never come into their heads to fabricate colossal untruths, and they would not believe that others could have the impudence to distort the truth so infamously."

In other words: Paradoxically, the more outrageous the claim, the more apt we are to assume there must be some truth to it. Just as some banks and insurance companies are apparently "too big to fail," some claims from those with political power seem to strike us as "too big to disbelieve." "That seems so outrageous it must be right," we tell ourselves. "The important people keep saying it -- they must know something I don't know."

That's the only explanation I can come up with for why the 2001-2002 memos stood as Bush administration doctrine for as long as they did. (The Big Lie theory also helps explain why other manifestly false Bush administration claims prevailed in the face of the evidence: Recall, for instance, how we were assured that Iraq had weapons of mass destruction and that the war would be a cakewalk?) ...

Conspiracy theory 101. Do shapeshifting LA Times pundits have an original thought in their "paranoid" heads? Or has taking dictation and debating shallow talking points reduced them to mere echo chamber "profundities" approved by the establishment? Does the word "hypocrisy" register when a writer is habituated to second- and third-hand political clichés and big lies?