Mehmet Oz is facing accusations of animal abuse tied to his medical research. Here’s what you need to know.

Questions over treatment of animals in research that Oz oversaw at Columbia date back to the early 2000s. But there's no evidence that the Senate candidate personally mistreated any animals.

Mehmet Oz, the Republican nominee for U.S. Senate in Pennsylvania, is facing accusations over his treatment of animals following a report that dozens of his experiments at Columbia University resulted in the deaths of hundreds of dogs.

The issue went viral after Jezebel published a report about Oz’s time at the Columbia University Institute of Comparative Medicine labs, where he served as a “principal investigator” for a number of years. Since then, Senate Majority PAC, a Democratic super PAC, began airing an ad on the issue, which the Oz campaign has called “completely false” and “over the top.”

Questions over treatment of animals in research that Oz oversaw at Columbia date back to the early 2000s, when the animal rights organization People for the Ethical Treatment of Animals detailed allegations from a whistleblower. The USDA eventually ordered Columbia to pay a $2,000 penalty for violations of the Animal Welfare Act as part of a settlement.

And this isn’t the first time the allegations against Oz, a celebrity doctor, have popped up on the campaign trail. In September, Billy Penn published an investigation into Oz’s time at Columbia, as well as the fallout over the experiments.

An Oz spokesperson called the Jezebel story “preposterous,” and said Oz was not present during the research and “does not condone the mistreatment of animals.”

Here is what you need to know about the allegations and Oz’s role in the research:

What happened at Columbia?

Whistleblower Catherine Dell’Orto, a postdoctoral veterinary fellow at the school, went public in the early 2000s about research at the university, saying that it inflicted needless suffering on research animals. PETA detailed some of the allegations in letters to the USDA and Columbia in 2003 and 2004, saying experiments by Oz and other researchers included “serious violations” of the Animal Welfare Act.

In one letter from 2003, then-director of PETA’s research and investigations department Mary Beth Sweetland detailed an incident in which “a litter of fully conscious puppies was placed in a plastic bag and killed” with an expired euthanasia drug.

“The puppies cried out as they received the IC injection because it is, of course, very painful and should not be done without first anesthetizing animals,” Sweetland wrote.

Oz’s name, however, did not appear in PETA’s letters until 2004, when Columbia and the USDA agreed to a $2,000 settlement in connection with animal abuse allegations. That settlement came following an internal investigation by Columbia.

The settlement agreement detailed a number of findings, two dealing with dogs. In one, “pups whelped from a dog being used in a research study were euthanized with outdated euthanasia solution” and “were not properly sedated at the time.” Another finding notes that a “dog exercise plan does not provide evidence that plan is approved by the attending veterinarian.” Other findings deal with primate enclosures, facility conditions, and procedures for evaluating pain and discomfort in animals.

Did Oz kill any dogs himself?

After the allegations began spreading online last month, at least one viral tweet indicated that Oz “pumped injections into puppies hearts without sedation.” However, The Inquirer was unable to find documentation from the time of the experiments that Oz himself euthanized any of the dogs.

Dell’Orto corroborated as much in an interview with Billy Penn, saying that “it wasn’t him that did the euthanasia of the puppies.” Billy Penn also noted that administering euthanasia is “rarely, if ever, left to department leaders or directors.”

What responsibility does Oz have?

As principal investigator, Oz was tasked with undertaking “full scientific, administrative, and fiscal responsibility for the conduct” of his studies, according to the school’s animal research handbook. But an Oz campaign spokesperson told The Inquirer that Oz was not alerted to any issues “until after the cases were finished,” and was not present for operations or treatments on animals.

“It does not appear that anyone from [Columbia’s Institutional Animal Care and Use Committee] actually bothered to inspect the dogs used in Oz’s experiments despite the invasiveness of the experiments and the strong potential for suffering,” Sweetland wrote in a 2004 letter to the USDA. She added that the USDA ought to “require that Columbia University suspend all further use of animals by Dr. Mehmet Oz.”

Dell’Orto echoed a similar sentiment to Billy Penn, saying that “when your name is on the experiment, and the way the experiment is designed inflicts such cruelty to these animals, by design, there’s a problem.”

Dell’Orto, Sweetland’s letter says, took her concerns to then-head veterinarian Sulli Popilskis, who allegedly told her: “You still don’t understand do you? It’s all political.”

What’s going on with the super PAC ad?

Senate Majority PAC began running a 30-second ad across Pennsylvania focusing on the issue. Since it first aired Oct. 11, the ad has aired hundreds of times, Politico reports.

The Oz campaign released a statement saying the SMP was “forced to remove” the ad, calling it “completely false, over the top, [and] preposterous.” Politifact rated the ad “half true” on its Truth-O-Meter, saying that its claims were only partially true, and its focus on a particular dog’s alleged “unimaginable pain and suffering” was misleading.

“Over the last few days, we were informed by both Comcast and broadcast stations across Pennsylvania that the Senate Majority PAC is no longer running their ridiculous lies about Doctor Oz’s medical work,” Oz spokesperson Brittany Yanick said in a statement.

SMP, however, told Politico that they will be airing an “encore round” of ads about the issue. The group’s spokesperson, Veronica Yoo, said in a statement that suggesting the ads were removed “against our intent is categorically false.”

What are the candidates saying?

Lt. Gov. John Fetterman, the Democratic nominee for Senate, seized on the controversy, tweeting that “some sick people like Dr. Oz get their jollies by harming animals,” and called Oz “a puppy killer.” Fetterman also shared a photo with his rescue dogs Levi and Artie, writing that he would be “hugging them extra tight tonight.”

Oz’s campaign denied the allegations in a statement to The Inquirer, and accused Fetterman of using the viral story to distract from other issues.

“While Dr. Oz was busy operating on human lives, researchers and veterinarians were in the Columbia University research labs finding new approaches to treat patients with atrial fibrillation which impacts millions of Americans — including John Fetterman,” said Yanick. “Dr. Oz was not in the operating room when the operations were done, he wasn’t present during the post op treatments, no one alerted him of the problem until after the cases were finished and he does not condone the mistreatment of animals.”

“Every dog has its day” means that sooner or later, everyone will have a moment of great influence. For actual dogs, that moment might be the upcoming election between Republican Dr. Mehmet Oz and Democratic Lt. Gov. John Fetterman for Pennsylvania U.S. senator. 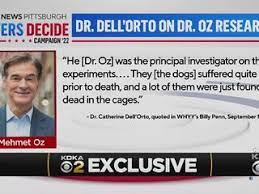 A recent ad paid for by the Senate Majority Super PAC claims that Oz directed a lab at Columbia University where over 300 dogs were treated cruelly and killed during medical experiments. The graphic video highlights one beagle, who “wasn’t given a name, only a number,” and who was subjected to “29 days of unimaginable pain and suffering until Oz took her for the last experiment.”

In a race that is now rated a toss-up by some political pundits, the explosive 30-second spot could be the difference.

PolitiFact has reported that the Oz campaign “did not dispute a report that more than 300 dogs were euthanized during experiments between 1989 and 2010 in a Columbia University research lab Oz supervised.” The Oz campaign claims that the lab was actually run by grad students and veterinarians.

Still, Oz was the principal investigator for the research grant, which means that he was in charge. Columbia was fined $2,000 in 2004 after settling the case with the government. PolitiFact rated the campaign allegations “half true,” which is enough to make Oz the Cruella De Vil of the 2022 midterm elections.

Allegheny County Treasurer John Weinstein understands how important dogs are to our families and community. His office issues 125,000 dog licenses to county residents outside of Pittsburgh every year, and he figures there are another 75,000 dogs out there. One million dog licenses are issued across Pennsylvania. That’s a lot of voters in the race for the Senate.

Weinstein, who has been on the board of Animal Friends, the region’s no-kill animal shelter, for 24 years, says, “People are so passionate about their pets. It’s like nothing you’ve ever seen. They dig deep to protect and provide for them.”

Ask Sen. Mitt Romney if the Oz story is a big deal politically. During Romney’s unsuccessful run for president in 2012, he was hounded by a report that he placed his Irish setter Seamus in a dog carrier that he tied to the roof of his station wagon for a 12-hour family trip to Canada. When Seamus took sick, Romney hosed him down at a gas station.

The story stuck and prompted the formation of a group called “Dogs Against Romney.” When ABC’s Diane Sawyer interviewed Romney on the evening news, she said that viewers wanted her to ask about the Seamus incident more than anything else. And Romney’s bad judgment was mild compared to the charges against Oz.

When it comes to our family pets, it doesn’t matter if you are a Republican or a Democrat — all they do is love us. If there is one issue that crosses party lines and political ideology — one issue that is neither red nor blue, neither conservative nor liberal — this is it.

Will Rogers, the street philosopher of the Great Depression, said, “I love a dog. He does nothing for political reasons.” But that doesn’t mean that dogs are out of politics — especially when they are part of people’s families. Then, Oz’s treatment of dogs may be enough of a political reason to vote against him. We shall see.

Joseph Sabino Mistick is a Pittsburgh lawyer. Reach him at misticklaw@gmail.com.