Banks have spotted a trend of fraudulent charges tied to credit and debit cards that have all been used at Trump hotels, according to Krebs.

Trump Hotel Collection has not yet confirmed the breach, but financial industry sources told Krebs “they have little doubt” a breach has occurred. There is speculation that the compromise spans back to at least February of this year.

“Like virtually every other company these days, we have been alerted to potential suspicious credit card activity and are in the midst of a thorough investigation to determine whether it involves any of our properties," Eric Trump, executive vice president of development and acquisitions at the Trump Organization, said in a statement. "We are committed to safeguarding all guests’ personal information.” 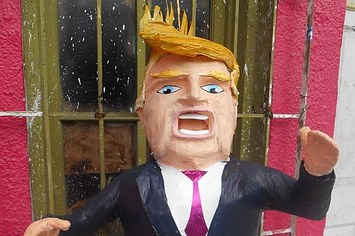 The bombastic star of the reality show “The Apprentice” has dominated headlines since entering the 2016 race two weeks ago with a blustery and scattered speech that some found offensive.

“They’re sending people who have a lot of problems,” Trump said of illegal immigrants from Mexico.

NBCUniversal decided to no longer air the “Miss USA” and “Miss Universe” pageants, which are produced with Trump. And Macy’s also said Wednesday it would pull Donald Trump-branded merchandise from its stores in protest over Trump’s “disparaging characterizations” of immigrants.

Trump has not backed down from his statements, arguing he shouldn't have to apologize for sharing his views.

If confirmed, Trump’s hotels would be far from the first to be hacked.

The Mandarin Oriental Hotel Group in March acknowledged that its luxury hotels in the U.S. and Europe had been infiltrated.

In April, White Lodging said that 10 of its restaurant and lounge properties had been hit by digital intruders who were in the system from July 2014 until February 2015.