Democracy Hangs by a Thread in Honduras

The right-wing coup d'état is faltering, but its supporters have powerful friends in Washington ... 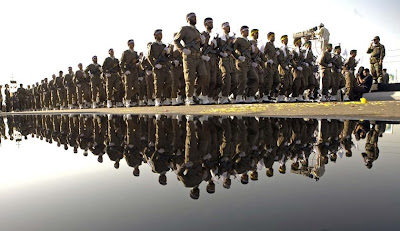 ... Financial backing for the coup is identified by some as coming from the pharmaceutical industry, which fears Mr Zelaya's plans to produce generic drugs and distribute them cheaply to the impoverished majority in Honduras, who lack all but the most primitive health facilities. Others point to big companies in the telecommunications industry opposed to Hondutel, Honduras's state-owned provider. Parallels are being made with ITT, the US telecommunications company that offered the Nixon government funds for the successful overthrow of President Salvador Allende of Chile in 1973.

A key figure is Robert Carmona-Borjas, a Venezuelan active against Mr Chavez in 2002, who later fled to the US. He runs the Washington-based Arcadia, which calls itself "an innovative 'next generation' anti-corruption organisation". Its website carries three video clips alleging, without evidence, that Mr Zelaya, his associates and Hondutel are deeply corrupt. Behind Arcadia are the US-funded National Endowment for Democracy (NED) and the International Republican Institute (IRI), the well-funded overseas arm of the Republican Party. Currently active among the Uighurs of western China, the NED has this year funnelled $1.2m (£740,000) for "political activity" in Honduras.

The focus of attention in the campaign against Mr Zelaya is now on the office of Senator John McCain, the defeated US presidential candidate, who is chairman of the IRI, takes an interest in telecoms affairs in the US Congress and has benefited handsomely from campaign contributions from US telecoms companies – which are said to have funded the abortive 2002 coup against Mr Chavez.

Mr McCain's former legislative counsel, John Timmons, arranged the visit of Micheletti supporters to Washington on 7 July where they met journalists at the National Press Club "to clarify any misunderstandings about Honduras's constitutional process and ... the preservation of the country's democratic institutions".

Meanwhile, within the US administration, difficulties in co-ordination have emerged between the State Department and the White House, with the Secretary of State, Hillary Clinton, issuing a low-key condemnation of the coup which was quickly superseded by stronger words from Mr Obama. The President called for Mr Zelaya's reinstatement, which Mrs Clinton had failed to demand.

The conservative-minded Mrs Clinton retains John Negroponte, an ambassador to Honduras under Ronald Reagan, as an adviser. He also represented George W Bush at the UN and in Baghdad. Democratic Senator Chris Dodd attacked Mr Negroponte in 2001 for drawing a veil over atrocities committed in Tegucigalpa, the Honduran capital, by military forces trained by the US. Mr Dodd claimed that the forces had been "linked to death squad activities such as killings, disappearances and other human rights abuses".

During his time in Tegucigalpa, Mr Negroponte directed funds to the US-supported Contra terrorists seeking to overthrow the government of Nicaragua. He assured them of arms and supplies from the Palmerola airstrip, the main US base in Central America. As President Rafael Correa of Ecuador is in the final stages of closing the US base in his country, Mr Negroponte is conscious of what the US could lose if a Zelaya government banned its presence at Palmerola. For their part, Hondurans have noted that when Mr Zelaya tried to return on 6 July, and his plane was refused permission to land at Tegucigalpa airport, no room was found at Palmerola.

Since last July, the US ambassador in Tegucigalpa has been the Cuban-born Hugo Llorens. He was the principal National Security adviser to Mr Bush on Venezuela at the time of the failed 2002 coup, when he was working with two other well-known State Department hardliners, Otto Reich and Elliot Abrams.

Mr Reich, a former US ambassador to Venezuela, advised Mr McCain in his presidential bid and previously worked for AT&T, the US telecoms giant. As he goes into battle against Mr Zelaya, the website of his business consultancy, Otto Reich Associates, quotes Mr Reagan: "You understand the importance of fostering democracy and economic development among our closest neighbours."

Mr Abrams was also deep in the business of supplying the Contra terrorists. He tried to sabotage the Central American peace plans proposed by Oscar Arias, then the Costa Rican President, who later received a Nobel Peace Prize for his efforts. In 1991 Mr Abrams, a neoconservative passionately supportive of Ehud Olmert and other leading Israeli hawks, was convicted of hiding information from the US Congress investigation of the Iran-Contra affair. The New York Times reported in 2006 that he had strong ties to then vice-president Dick Cheney. ...