LOS ANGELES (TND) — Three filmmakers considered to be some of the nation's leading documentarians wrote an op-ed published in the Los Angeles Times blaming Americans for "fueling" the rise of Nazi Germany and the Holocaust, even though the U.S. admitted more refugees from Nazi Germany than any other sovereign nation during World War II. 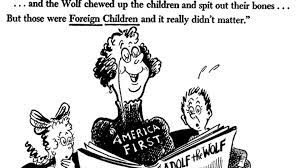 The op-ed was written by Ken Burns, Lynn Novick and Sarah Botstein, who've spent six years researching for a documentary about the U.S. and the Holocaust.

While not only blaming America for spurring the rise of Nazis, the filmmakers also drew parallels to today.

"[W]e were not looking for parallels to the present, though we knew they were there, even before Donald Trump c

by ALEC SCHEMMEL | The National Desk

Tuesday, September 13th 2022ame to office. But now these dark moments in our history echo all too clearly," the filmmakers wrote.

They add that the U.S. "faced a similar crisis of belief in the lead-up to World War II," which was "marked by a swell of homegrown, right-wing extremism, isolationism, xenophobia and racism."

The filmmakers pointed to the 19th and early 20th century eugenics movement in the U.S. as evidence that America was in a frenzy to "preserve the 'racial' makeup of the country," despite eugenics becoming a "global movement" by the 1920s, according to the National Institutes of Health.

Additionally, the movement in the U.S. "was not primarily about creating a master race," according to Washington University's Garland Allen.

The filmmakers also argued the U.S.'s troubled history with racism and slavery contributed to the rise of Nazi Germany and "undermined our credibility against Nazism on the international stage."

"When Nazi jurists sought statutes on which to base their own antisemitic laws, they turned to the Jim Crow South," the filmmakers asserted.

The op-ed chastised Americans' understanding of their country's history, arguing many "cling to blind and unexamined notions of the nation's 'greatness,'" and fear "a thoughtful look at our country’s history."

"The battles we are fighting today are battles about whether as a society we choose honest understanding of the past over willful blindness," the filmmakers insisted.

The National Desk (TND) was informed by a spokesperson for Ken Burns that the title of the op-ed — "Americans fueled the rise of Nazis and the Holocaust. Will we learn from that shameful chapter?" — was selected by the L.A. Times, not the authors.

When TND inquired about how Mr. Burns and his fellow documentarians feel they can support their claim, in light of the fact the U.S. admitted more refugees from Nazi Germany than any other sovereign nation during the war, a response was not immediately received. This story will be updated in the event of a response.

The documentary from Burns, Novick and Botstein will debut September 18 on PBS.