” … Videla cast his net wide, persecuting academics, journalists, students and social workers as well as leftist guerrillas. The opaqueness of the junta’s reasoning made popular the phrase ‘por algo sera,’ or ‘it must have been for something,’ among Argentines trying to justify their own inaction. … “

JORGE RAFAEL VIDELA, an Argentine former military dictator who ordered the torture, murder and disappearance of thousands of civilians during the country’s seven-year military rule, died on May 17th in his prison cell on the edge of Buenos Aires, where he was serving a life sentence for crimes against humanity.

Dubbed the “Pink Panther” for his lanky frame and stealthy gait, Videla seized power in 1976 when left-wing militants, runaway inflation and corruption had begun to rattle Isabel Perón’s civilian government. He said that military rule was necessary to protect national security and human rights. In power, however, he had a selective vision of who was entitled to such rights. Not suspected leftists, certainly; nor anyone who did not ascribe to his totalitarian ideology. “He viewed his mission as sacred, and those who disagreed with it as sinful enemies,” says Federico Finchelstein, an Argentine historian at the New School university.

In what Videla called a “process of national reorganisation”, Argentines deemed threatening were kidnapped, imprisoned, tortured and killed. Suspects were snatched from their families, subjected to electric shocks, starved, beaten, raped, and held underwater for minutes at a time. Others were pushed out of military aircraft into the River Plate or the Atlantic to drown. Abducted mothers were separated from their babies, who were sometimes adopted by the military officers responsible for their capture.

Videla cast his net wide, persecuting academics, journalists, students and social workers as well as leftist guerrillas. The opaqueness of the junta’s reasoning made popular the phrase “por algo será”, or “it must have been for something”, among Argentines trying to justify their own inaction.

Videla never admitted to sponsoring assassinations, referring only to “disappearances”. In 1979, in response to a journalist’s inquiry about the locations of the disappeared, he snapped: “The disappeared are just that: disappeared. They are neither alive nor dead. They are disappeared.” The illusive nature of the victims meant that the military controlled their prisoners’ fate even in death, Mr Finchelstein says.

Videla retired in 1981. The following year his successors dragged Argentina into war with Britain over the Falkland Islands, a conflict that Argentina would lose in humiliating fashion. Defeat spelled the end of military rule. In 1983, democracy was restored with the election of Raúl Alfonsín and the country began to assess the extent of the destruction Videla had wrought. Official documentation put the number of dead at 9,000. Human-rights groups calculated that as many as 30,000 people had died in Videla’s purges.

Repairing the psychological damage inflicted by the “Dirty War” has been even more difficult than obtaining credible estimates of its toll. Mr Alfonsín set up a tribunal that, in 1985, sentenced Videla and several of his henchmen to life sentences. Videla’s sentence was annulled five years later by Carlos Menem, who believed that pardoning the junta and the leftist guerrilla commanders accused of terrorism would “begin to rebuild the country in peace, in liberty and in justice”. In 2006 a judge ruled the pardon unconstitutional. Following a 2010 trial Videla, by then 84 years old, was again sentenced to life in prison.

For many Argentines, Videla’s conviction and death have not brought closure. Although during his 2010 trial he assumed “full military responsibility for the actions of the army in the war against terrorism”, he was unrepentant about his crimes and died without revealing much about his shadowy rule. The Grandmothers of the Plaza de Mayo, a group of mothers and grandmothers with disappeared children, said of Videla’s passing: “We feel the weight of the fact that he didn’t speak about or divulge the locations of the 30,000 people and 400 grandchildren that we look for even today.”

As the search for the missing continues, Argentina is trying to move on from its dark, “dirty” past. Adolfo Pérez Esquivel, a human-rights activist who won a Nobel Prize for his organizing efforts during Videla’s dictatorship, wrote on his website: “We don’t forget, nor do we pardon. But in contrast to him, we celebrate life, not death.”

Previous Article
“Useful Enemies”: U.S. Admitted not just Nazis after WWII, but their Sadistic Collaborators
Next Article
Obama to the People: I Am Not a Crook 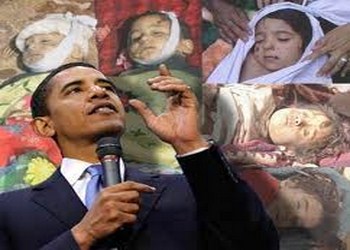 Obama to the People: I Am Not a Crook
May 25