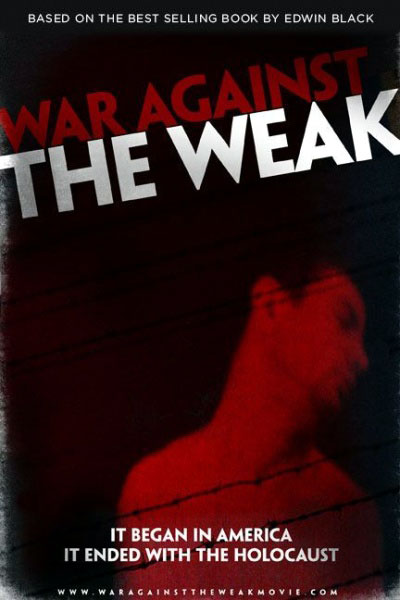 "Aren't three generations of imbeciles enough?" is a line repeated over and over in this documentary recounting how the Western pseudoscience of eugenics morphed into genocide during World War II.

In horrifying detail, "War Against the Weak" explores the scientific climate that led to the extermination of many millions of Jews and other "imbeciles" at the height of the Third Reich. Eugenics, the study of selective breeding, sprang up in the 1860s under the tutelage of Francis Galton, an English scientific wunderkind and half-cousin to Charles Darwin. Roughly 70 years later, it flowered as "racial purity" under Hitler's hand — and it all took root in America.

Galton popularized eugenics as a way to rid humanity of disease and defects — such as epilepsy, premature births, retardation and alcoholism — through sterilization. He was under the impression that if such blemishes were not eradicated, humanity would slide down a path to extinction. American eugenicists picked up on Galton's studies and, according to the film, "In the first 70 years of the 20th century, more than 70,000 Americans were eugenically sterilized," mostly women — thousands more were "eugenically separated" into colonies — so they could not further pollute the gene pool with their so-called inferiorities.

"War Against the Weak" is based on the book of the same name by American journalist Edwin Black, the son of Holocaust survivors, who has written three books uncovering the ties between Nazi Germany and American corporate giants such as IBM, the Rockefeller Foundation, the Carnegie Institution and General Motors. For instance, in his book, "IBM and the Holocaust," Black details how IBM customized punch cards for Nazi Germany, without which the deportation and extermination of so many people would likely have been impossible to mastermind. In this new film, Black and director Justin Strawhand posit that it was American eugenics studies that Adolf Hitler first latched onto in 1924 while in prison on a treason charge, as he began to construct his political ideology in "Mein Kampf." Hitler took the eugenics thinking one giant step further and applied it to Jews, Gypsies and other people, graduating from sterilization to mass killings.

There's no happy ending to "War Against the Weak." At the close of the film, viewers are reminded that the U.S. government and United Nations helped fund the forced sterilization of nearly 300,000 women in Peru during the 1990s; Australian philosopher Peter Singer, a bioethics professor at Princeton, has "called for the right to kill disabled infants up to one month after birth; and in 2007, American Nobel Prize-winner James Watson, who helped discover DNA, claimed that blacks are genetically inferior to whites.