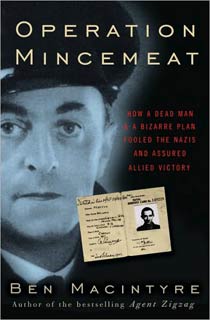 Ben Macintyre follows 2007's Agent Zigzag with Operation Mincemeat, another true WWII tale that reads like something by Ian Fleming. In fact, two of Fleming's fellow British intelligence officers hatched the title operation. They dressed a corpse in uniform and arranged for it to wash up on a Nazi-friendly stretch of the Spanish coast bearing a suitcase with false war plans. Against all odds, Operation Mincemeat succeeded — and helped convince the Germans that the Allies planned to invade Sardinia and Greece in 1943  instead of their real target, Sicily. Relying on a cache of once-classified documents, Macintyre provides the fullest account yet of this curious episode and enlivens his yarn with quirky details. B+