From: "Live from Honduras: An Interview with Berta Caceres"
by Beverly Bell/Bertha Caceres
28 September 2009 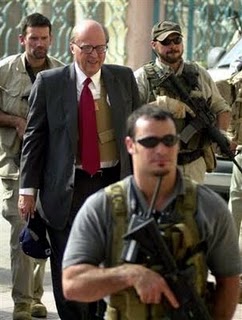 ... There's been a campaign of terror through the media, using the psychology of fear to criminalize protest, to criminalize social movements. There have been smear campaigns of all kinds, and threats. We have seen how the media, owned by the coup oligarchs, has been used to motivate violations of human rights. A shameless call to beat and repress. And also a violation of the right to free expression. We've seen how the coup government has been repressing all of the media.

Where people were protesting, they've shut them up, they've kidnapped journalists. The media outlets were closed the day they imposed the curfew, which really has encouraged the human rights violations. The state of emergency denies all of our human rights as civilians. We've seen how the military says that they don't need any kind of judicial order to detain people; this affects everything. The killing of women has increased 60% just since the coup began. The military and the police have been assaulting women, all of this rage against women just because they are women, and that's without even talking about indigenous people or black people. So we're living in this repressive state, in a militarized society.

Where death squadrons have been reactivated, shamelessly, the 3-16 [ed. note: an infamous military death squad that operated in Honduras in the 1980s], the generals who attended the School of the Americas, including CIA agents like Billy Joya [leader of the 3-16 Brigade], who was a trainer and organizer of torture, a good student of Gustavo Alvarez Martinez [a Honduran general during the 1980’s who was accused of horrific human rights violations], and of John Negroponte [U.S. Ambassador to Honduras in the 1980s], and now he's the number one security advisor to Micheletti, the coup leader.

And we've seen how the coup leaders have been accompanied by international terrorists like Otto Reich [Former U.S. Assistant Secretary of State and supporter of the 2002 coup in Venezuela] and Robert Carmona [A leader in the 2002 Venezuelan coup], recognized counter-revolutionaries, and how the counter-revolutionary mafia in Miami has been so shamelessly involved with this. Robert Carmona was in the presidential palace, in the prosecutor's office, meeting with the attorney general in the Congress, guarded by the military.