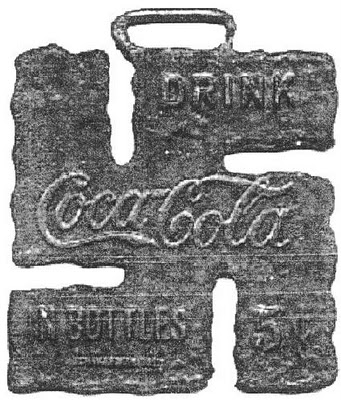 Coca-Cola adverts are to be found in the farthest corners of the globe promoting a happy, wholesome image, but now they are the subject of a new exhibition which links the soft drinks giant with Nazi Germany.

Coca-Cola has rejected any suggestion that it sympathised with the Nazi regime, although it admits it operated in Germany while Hitler was in power.

Artists and members of the public with artistic aspirations were invited to contribute to the exhibition. Their brief was to imagine Coca-Cola's adverts in Nazi Germany. Mr Thomas said: "Coke exists through advertising. That's why people drink the stuff. You can't escape it. What we wanted to do was to create an exhibition which made people think again every time they reached for a Coke.

"It's a very democratic exhibition. I mentioned it after gigs and we set up a website. If a work is submitted, it will be exhibited."

Images in the exhibition, which will include more than 400 pieces when it moves to the Foundry in east London next month, feature Coca-Cola symbols - the company's slogan and the Coke bottle - combined with Nazi slogans, propaganda and pictures of Adolf Hitler.

Predictably, it has not gone down well at Coca-Cola. "We reject out of hand the suggestion that as a company Coca-Cola ever sympathised in any way with the abhorrent acts or policies of the Nazi regime in Germany," said Tim Wilkinson, communications director for Coca-Cola Great Britain. "That is an unwarranted insult toward every person working for our company."

Coca-Cola has donated money to help those who were involved in forced labour during the Nazi years in Austria and Germany, but Mr Wilkinson said this was good corporate practice and not an admission of guilt.

Richard Niman, whose sculpture portraying Hitler as a little girl holding a doll has been on display at the Imperial War Museum in London since 1990, is involved with the project. He believes that focusing on Coca-Cola's past gives the show wider appeal. "You have to pick something big to make it have a more universal context. Hopefully it will embarrass Coca-Cola," he said.

Thomas, known for his attacks on the Government and on corporate Britain, has been compared with the American Michael Moore. He uses stand-up gigs and his Channel 4 show to decry miscarriages of justice and oppression.

He has forced the former armed forces minister Nicholas Soames to display a family heirloom, a mahogany three-tier buffet, at Christie's in London, under a law that made works of art available to the nation in lieu of inheritance tax, and has driven a tank into a McDonald's "drive-thru" restaurant.

He has also has set up an exhibition of contaminated sea- gull droppings at the Sellafield nuclear centre, and went to the Athens arms fair in 1998 posing as a PR consultant and encouraging dealers to put on a media-friendly spin.

Thomas's concerns centre on Coca-Cola's actions in Kerala in India, where it has come under fire from courts over water consumption at its bottling plant. Coca-Cola denies that it is responsible for depleted water reserves in the region.

Coca-Cola's Nazi Adverts is on show at the Nancy Victor Basement, 36 Charlotte Street, London W1 until 10 June. The exhibition will then move to the Foundry, 84-86 Great Eastern Street, London EC1.