Forty-three years ago Monday, the Rev. Martin Luther King Jr. was assassinated in Memphis, Tenn. He was there to support a garbage collectors' strike, and on the night before his death gave what would be his final sermon. Amid the call for for African-Americans to boycott businesses that mistreated workers, he delivered a sermon, without notes, that focused on his life and disavowed any concern that he might be killed for his role in the fight for civil rights. 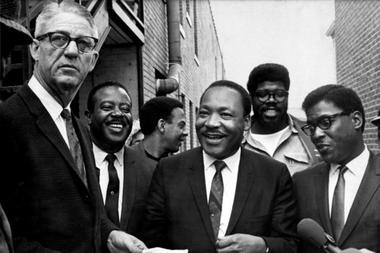 Martin Luther King Jr. walks in Memphis, TN on April 3, 1968. King would make his famous ''Mountaintop'' speech at Mason Temple the evening of April 3. The next day, at 6:01 p.m., King was shot and fatally wounded as he stood on the balcony outside his room at the Lorraine. At the time, he was on his third trip to Memphis in support of striking sanitation workers. c51/ZUMA Press/Newscom

"Like anybody, I would like to live a long life. Longevity has its place. But I'm not concerned about that now,” the Rev. Mr. King said that evening. “I've seen the promised land. I may not get there with you. But I want you to know tonight, that we, as a people, will get to the promised land!”

Now known as "I've Been to the Mountaintop,” the sermon was called King's "most apocalyptic" by King scholar James Washington. It was not the first time King had spoken publicly about his possible early death, though those close to him say King certainly did not expect the April 3 sermon to be his last.

"He always knew some speech would be his last," wrote Andrew Young, who was with King in Memphis. "Was he afraid? Not on your life!"

King had received death threats for years and had already survived one assassination attempt. In 1958, a black woman who apparently suffered from mental illness stabbed him at a book signing, nearly killing him. In its report on the incident, The New York Times wrote, momentously, that the wound was so severe that King would have died had he sneezed.

In his last sermon, King reflected on that experience, recalling that a ninth-grade girl wrote him afterward to say she was glad he hadn’t sneezed. King used that experience to reflect on his career and the civil rights movement.

After the sermon, King took His seat. His friend Benjamin Hooks recalled that King's words had elicited surprising emotions in both listeners and speaker.

"To my surprise, when I got a little closer, I saw tears streaming down his face," Mr. Hook said in a speech a decade later. "Grown men were sitting there weeping openly because of the power of this man who spoke on that night."