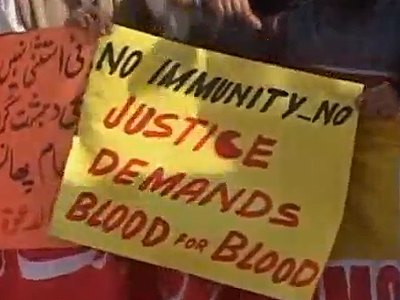 FO documents proved Davis did not have ‘immunity’: Qureshi

ISLAMABAD: Former foreign minister Shah Mehmood Qureshi said Wednesday that foreign office documents proved that Davis was not immune from criminal prosecution and that the sensitive case would be decided by the court, DawnNews reported.

Speaking to the Rawalpindi District Bar, Qureshi revealed that the US ambassador had threatened to cancel Qureshi’s meeting with Hilary Clinton in Germany if Raymond Davis, a US national who killed two Pakistanis in Lahore, was not awarded diplomatic immunity. Qureshi said he did not oblige and did not compromise on the sensitive matter. ... CONTINUED

Raymond Davis, a CIA contractor accused of killing two men on the streets of Lahore, Pakistan, appeared before a Pakistani judge today and refused to sign a list of allegations against him, a lawyer in the court said.

During the hearing, which was held in the jail where Davis is being detained due to security reasons, court officials read aloud the allegations of murder and then presented the charging documents in English to Davis, an attorney for the family of the victims, Asad Manzoor Butt, and a U.S. official told ABC News. The handcuffed Davis, however, refused to sign the document and instead presented to the judge a written notice declaring diplomatic immunity, Butt said.

Since his arrest last month, the U.S. government has demanded Davis be released on the condition of diplomatic immunity since the State Department said he carried a diplomatic passport as a member of the "administrative and technical staff" of the U.S. embassy in Islamabad. U.S. Consul General in Lahore, Carmela Conroy, was present for today's trial, a U.S. official told ABC News, along with members of her staff. But Davis was not afforded an attorney, Butt said.

It's not the first time that Davis, who was recently revealed to be working for the CIA, has resisted cooperation on grounds of diplomatic immunity. In a police interrogation video obtained by ABC News, Davis refuses to answer the officers' questions and attempts to abruptly leave the room.

"I'm not answering any questions. I'm not. No questions. You have my statement. I have diplomatic immunity," a visibly frustrated Davis says. Police then tell him that based on his passport, he does not appear to be a diplomat.

"OK. Do you have it? Can I see it?" Davis says. "Very front page, diplomatic immunity."

When police continue questioning him, Davis tries to leave the room.

"I'm not answering any questions. I'm going back to my room," he says.

CLICK HERE to see the interrogation video and the latest on the Raymond Davis case on this week's "Brian Ross Investigates".