“I think we should understand our policy-that however unpleasant they act, this government is better for us than Allende was.” – Henry Kissinger

I remember the funeral like it was only last week. The death had been public and shocking. Two people torn apart by a car bomb not far from a part of Washington, DC I occasionally hung out in. The funeral was an expression of anger, sadness, and resistance to Chilean fascism and Washington’s support for that fascism. Joan Baez’s voice brought it all together when she sang to the family, the friends, the marchers and god. The fascists across the street from the church were forced to bow their heads, hopefully in shame for the murders their allies had committed.

On September 21, 1976, a bomb blast ripped through a Chevy Chevelle on Embassy Row in Washington, DC. Inside the car were exiled Chilean minister Orlando Letelier, Ronni and Michael Moffitt. All three were on their way to work at the Institute for Policy Studies, also in DC. Unknown to them, assassins working for the Chilean internal security police apparatus (DINA) had strapped a bomb underneath the driver’s seat. Two members of the assassin team pushed a button on the radio device in their car after Letelier’s car passed them and blew up the car. Letelier died almost instantly. Ronni Moffitt died in the hospital a short time later. Her husband Michael was slightly wounded, but attempted to revive Letelier and his wife, while bystanders called the police and an ambulance.

In the days and weeks that followed, the US foreign policy establishment and the Pinochet Regime in Chile tried to place the blame for the attack on ultra-left Marxist organizations hoping to make martyrs out of the dead. Although this theory was accepted by those whose interests it served, many people were not buying it. Together with the families of the dead, Moffitt’s and Letelier’s fellow workers at the IPS began to investigate. Police agencies were involved in their own investigations, but most were accepting the scenario put forth by the Chilean government. The IPS knew that Letelier had been threatened numerous times by Chilean fascists for his work opposing the coup and the junta that violently replaced the elected government of socialist Allende. Though they worked with the police when possible, their investigation made greater strides given it knew where to begin looking. One of those investigating was IPS fellow Saul Landau. Together with attorney John Dinges, Landau wrote a book describing the arduous journey the investigators took before justice was finally served.

The book, titled Assassination on Embassy Row, discusses the politics of Chile leading up to the election of Allende, the subversion of the Allende government by big business, Chilean fascists, right wing US citizens, and the Nixon White House under the direction of Henry Kissinger. By detailing these connections it serves as a useful history of Chile immediately before and after the 1973 coup. However, it is mostly a well-written piece of true crime. On par with such classics of the genre like Truman Capote’s In Cold Blood or Ed Sanders’ excellent investigation of the Manson Family murders (The Family.) The reader is presented with the murder at the book’s beginning. From there, one is taken back to the political history of Chile, the growing popularity of the left-leaning Popular Unity electoral slate and the increasing fear of the Chilean upper classes and their right wing political protectors, and the illegal intervention of the CIA, the White House and various multinational corporations with huge investments in Chile in the Chilean political system. Once Landau and Dinges have set the stage, their storytelling begins in earnest. Conspiracies are enjoined, individuals are hired and their pasts portrayed, weapons are purchased and deceptions are planned and undertaken.

When the murder is finally described, the paragraphs describing it and the immediate aftermath should wrench the heart of any reader who is not a psychopath. It is as if one is there, present on the sidewalk or in a parked car near the incident. This crime was not merely the act of a few individuals. It was an act of the government of Chile under Augusto Pinochet. The intention was to rid Pinochet’s regime of a vocal opponent of his fascist regime who was quite successful in organizing opposition to that regime; opposition that prevented Pinochet and his junta from gaining the international legitimacy he had hoped the blessing of Washington, DC would provide. Unfortunately, the investigation and prosecution of the crime failed to address this aspect, despite the best efforts of Landau and others from the IPS. Given the political nature of the times, the fact that anyone was convicted is testament to the work of these folks and the law enforcement officials who led the prosecution. On a parallel note, the appearance of certain names in the narrative—Henry Kissinger and George HW Bush being the best known—serves to remind the reader how the United States government really operates. 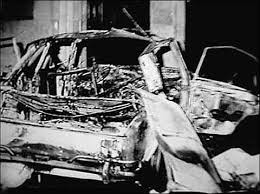 This book was out of print for many years and was recently revived as an ebook for Mark Crispin Miller’s Forbidden Book Shelf series. After reading it this time around, I was left with emotions similar to those I experienced when following the investigation itself. Foremost among those emotions were anger and disgust: anger at the CIA’s intentional manipulation of information and disgust at how readily the mainstream media spreads such lies to the public, and anger at the murderous arrogance of the Chilean junta and its Washington accomplices and disgust at US citizens’ apathetic acceptance. Finally, there is the anger at the fact that so little has changed, with the possible exception that the system of power is more sophisticated in its treachery and crimes. One need only read the current news—especially in relation to Venezuela and Ukraine—to realize this truth.

Ron Jacobs is the author of a series of crime novels called The Seventies Series.  All the Sinners, Saints, is the third novel in the series. He is also the author of  The Way the Wind Blew: a History of the Weather Underground . Jacobs’ essay on Big Bill Broonzy is featured in CounterPunch’s collection on music, art and sex, Serpents in the Garden.    He is a contributor to Hopeless: Barack Obama and the Politics of Illusion, published by AK Press. His book Daydream Sunset: Sixties Counterculture in the Seventies will be published by Counterpunch. He can be reached at: ronj1955@gmail.com.

TO ORDER THE BOOK:

This is how Brennan did Michael Hastings too.