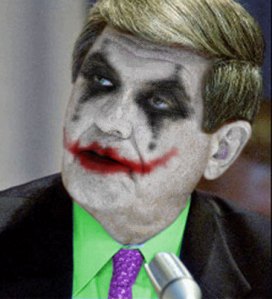 Since the White House and Senate Majority Leader Harry Reid seem unwilling to take on Blue Dogs blocking desperately needed public option from health care and insurance reform, the job of calling them out is falling to advocates and Keith Olbermann.

On Monday night, Olbermann’s Special Comment on Countdown took a rip at both Democrats and Republicans standing in the way of genuinely fixing America’s broken health care system because their campaign coffers are being enriched by the insurance-medical complex to the tune of millions of dollars.

But when the coalition group Progressive Change Campaign Committee began running TV spots in Nebraska and Washington DC highlighting Nebraska Sen. Ben Nelson – one of the staunchest Republicans in the Democratic caucus – threw a complete hissy fit. His spokesman, Jake Thompson, issued a statement threatening that, as a result, “health care reform may be dead by the end of August.”

Only a few problems with Nelson’s indignant, self-rightous and self-serving stand.

First, the “outside group” is Mike Snider, a small business owner in Ralston, Nebraska, who’s featured in the ad because health coverage for his employees and family rose an unconscionable 42% this year. Oh, and Nelson has taken more than $2.2-million in campaign contributions from the medical-insurance complex, the dictionary definition of an “outside special interest group.”

Somehow, in his statement Thompson overlooks the thick wads of cash stuffed in Nelson’s pocket by pharmaceutical companies, insurance companies, hospitals and doctors. And why does it take so much money to run for re-election in Nebraska, where TV spots can be bought for about $100 each? Two million bucks would buy 20,000 commercials – or every commercial availability on every television station in the state for more than a year. And we’re not even counting contributions Nelson receives from other corporate and individual donors.

Clearly, the medical-insurance complex wants something more from Nelson than helping him buy advertising and opening re-election campaign offices.

Sadly, if Nelson were the only problem Blue Dog, this would be a tempest in a teapot. But, as Olbermann points out, the list includes Senate Finance Committee chair Max Baucus, who’s received bags of money from the same people as have a long list of other Senate and House Democrats trying to block the will of 72% of Americans.

Fortunately, my representatives – Keith Ellison in the House, and Amy Klobuchar and Al Franken on the Senate side – aren’t on Keith’s list. But theirs are only three votes among 535 and – more importantly – the 10 or so who are trying to wreck the nation’s first meaningful health care and insurance reform since Richard Nixon proposed the concept of HMOs.