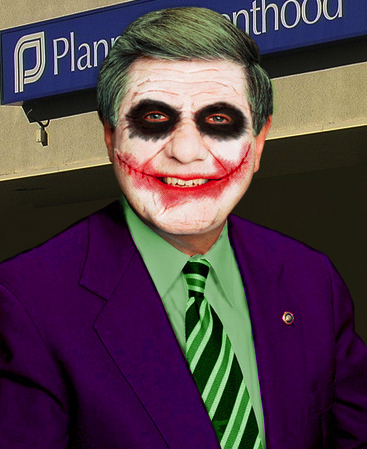 If you read this site fairly regularly, you might be thinking that President Obama is having some issues with the Senate. And you'd be correct. Here's an abbreviated list of hurdles: Dawn Johnsen can't be confirmed to head the Office of Legal Counsel; health care reform may have to do without a public option--if it happens at all; and Obama's goal of shuttering the Guantanamo Bay detention center by early 2010 is suddenly imperiled by the common cousins of conservative demagoguery and Democratic sheepishness.

The examples are manifold. And the voices of opposition are united.

"No way I can vote for her," says a senator of Dawn Johnsen.

Seeking to protect health insurance companies, which would be hard pressed to compete with a government provider, one senator called the idea of a publicly run insurance option a "deal breaker."

And on Guantanamo, the voice of the opposition in the Senate can be summed up thusly: "I think they need to be kept elsewhere, wherever that is. I don't want to see them come on American soil."

These aren't the idle protestations of embattled Republican leaders, though. They're the proclamations of the Democratic senator from Nebraska.

That's not entirely surprising. Ben Nelson is conservative and pro-life and has always been something of a spoiler for liberals. But since he took the lead in watering down the stimulus bill in the early days of the 111th Congress, he's been, if anything, more invested in the idea of blocking the progressive agenda than ever--and Senate math is on his side.

With Al Franken still yet to be seated, the Democrats are stuck with a 59-member caucus--one shy of the mythical 60, which could, in theory, make the party immune to Republican filibusters. The problem is, theory and practice don't actually match up.

In the months since the stimulus bill passed, Nelson voted against the President's budget, and is now holding out on Johnsen, trying to neuter health reform efforts, and positioning himself to complicate the President's long-term plan to close down the GITMO prison.

If Nelson were to relent on Johnsen--as he did for such Bush-era luminaries as Stephen Johnson and John Bolton--the Democrats would probably have 60 votes for cloture, and certainly more than 51 for confirmation. If he were to support a public health insurance option of some sort, the Democrats would be much better positioned than they are to pass health reform through regular order, rather than through the budget reconciliation process, which would circumvent the filibuster, but present other procedural complications. And if he hadn't decided to stake out this new position on Guantanamo detainees, Obama could breathe a little easier about his ability to secure closure funds this summer.

Yesterday, on Fox News Sunday, Nelson reserved himself the right to support a filibuster of Obama's first Supreme Court nominee. In 2005, Nelson was part of the so-called Gang of 14 senators who teamed up to end filibustering of judicial nominees except in extraordinary circumstances.

But Nelson's predictable posturing makes it such that, even with Al Franken's vote, the Democrats will need to find at least one Republican willing to cross the aisle vote for cloture on most of Obama's major initiatives. And that's a species of Republican that's becoming more and more rare every week.