(DISCLOSURE STATEMENT: Chris Allen does not work for, consult to, own shares in or receive funding from any company or organisation that would benefit from this article, and has no relevant affiliations.)

The decision to grant planning permission to build a new mosque in Dudley has come after more than a decade of wrangling in the West Midlands town. And the division caused by the arguments has proved an irresistible opportunity for Britain First, the new kid on the block in far-right politics.

Members of the party announced that they planned to bury a dead pig on the site, declaring that the Qur’an forbids any building on ground containing swine. And when it’s not making threats in Dudley, Britain First is standing candidates for public positions, including the forthcoming by-election in Rochester and Strood.

Although it is a separate party, Britain First does have links to the British National Party and the English Defence League. It was founded by James Dowson, a former BNP member. A Scottish Calvinist minister with close links to loyalist paramilitaries, Dowson was seen as a credible challenger to Nick Griffin’s leadership after the 2010 elections. Soon after though, he acrimoniously split from the BNP following allegations that he made unwanted sexual advances to a female colleague. 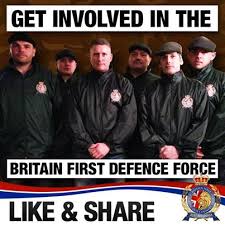 In May 2011, Dowson linked up with with Paul Golding, another former BNP councillor, to launch Britain First, a party they claimed would protect British and Christian morality. The group was behind the launch of the Protestant Coalition in Belfast in 2013 – a political alternative to the Ulster Unionist and Democratic Unionist parties – but it only started to make real impact after the murder of British soldier Lee Rigby in May 2013.

Posting a video on YouTube, Britain First declared its intention to place Islamist preacher Anjem Choudary under a citizen’s arrest, alleging that he was responsible for the radicalisation of Rigby’s killers, Michael Adebolajo and Michael Adebowale.

Until Rigby’s death, neither Islam nor Muslims had overtly featured in any of Britain First’s strategies or actions. In many ways it was conspicuous by its absence. But ever since, Rigby’s murder has remained a prominent feature of Britain First’s campaigning.

Underpinning the group’s claim to be at the forefront of the fightback against the rapid growth of Islam in the UK is a somewhat unique understanding of Christianity. Unlike its far-right predecessors, which used Christianity in a tokenistic way, Britain First’s hierarchy has a far more apocalyptic ideology. For them, an battle between Christians and Muslims will lead to the end of civilisation. 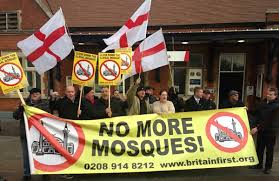 As though in preparation for this battle, the group has taken an increasingly militaristic approach to antagonising Muslims. This was evident earlier this year when it started a Christian Patrol in Tower Hamlets in London. Members arrived in the borough in three ex-military jeeps with a banner reading: “We are the British resistance”. They then made videos of themselves emptying cans of beer outside a mosque during Friday prayers.

It has even organised at least one “activist academy”, where members were taught boxing, self-defence and martial arts.

Most recently, Britain First members have taken to entering mosques en masse – many of them wearing a uniform of a flat cap and branded coat. They film themselves refusing to remove their shoes and confronting worshippers and imams on a range of tenuously connected issues. These include Britain being a Christian country, the failure to stop members of Muslims participating in grooming gangs, the need to read the Bible and the assertion that Muhammad was a false prophet. Members even aggressively force Muslims to accept copies of British Army Bibles.

With these tactics, Britain First cultivates a clear and direct militaristic tone and ethos that carries with it a rather insidious and dangerous message. And underpinning that message is an eschatology that goes beyond merely using Christianity to differentiate between Muslims and non-Muslims. Its message is about redemption and ultimately, salvation.

How this particular chapter in the evolution of anti-Islam, anti-Muslim far-right groups in Britain will play out remains open to question. But as the ugly scenes in Dudley highlighted, the tactics used are going to become increasingly confrontational and sadly, increasingly vile.

US Government Allows Extremely Toxic Substances, Including Industrial Waste, to be Used as Fertilizers and a Drinking Water Additive