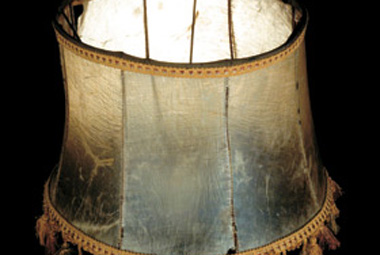 Ludwig Wittgenstein, one of the 20th century’s most influential philosophers, famously remarked: “Whereof one cannot speak, thereof one must be silent.”

Pirke Avot, the only Talmudic tractate to deal exclusively with ethical and moral questions, records this saying of Simeon, son of Rabbi Gamaliel: “I was raised among the sages and from them learned that nothing is to be preferred to silence.”

Jacobson is a prolific magazine writer — nowadays mainly for New York magazine — whose previous pieces have provided the basis for the film “American Gangster” and the television series “Taxi.” Like most successful freelancers, his inclination is to slice experience like salami. Shortly after Hurricane Katrina, one of Jacobson’s old friends, who lives in New Orleans, paid $35 for a curiously textured lampshade at a rummage sale. When he asked the seller what it was made of, he answered, “That’s made from the skin of Jews.”

Days later, the friend sent the lampshade to Jacobson in New York, urging him to “find out what it is.” Mitochondrial DNA testing by a Virginia laboratory established that the shade, in fact, was human skin. The sample, however, was too degraded to say anything more about whether the person from whom it had come was of European origin. Subsequent tests by Israeli and German forensic scientists reached the same conclusions.

Jacobson is all but convinced that the shade is one of those allegedly made at the behest of Ilse Koch, the sadistic wife of Buchenwald’s commandant, who — according to some accounts — had the skin of murdered inmates with unusual tattoos fashioned into domestic objects, including lampshades. Though Ilse Koch was sentenced to life imprisonment after the war, no such objects were introduced in evidence. Two segments of tattooed skin from Buchenwald currently are kept at two Washington, D.C., museums — though not at the national Holocaust Memorial Museum. The lampshade in Jacobson’s possession is not tattooed.

Whatever its origins, the fragment of human tragedy in Jacobson’s possession would seem to cry out for a decent end to the affront and indignity it has suffered. If he, in fact, believes it is the remains of a murdered Jew, then there are Orthodox rituals for the burial of partial remains. If uncertainty prevents that, nothing prevents the author from having the shade cremated and put to rest with whatever nonsectarian gestures of respect seem appropriate. No matter what Jacobson may speculate, that’s surely the reason the Holocaust Memorial Museum in Washington and Yad Vashem in Jerusalem declined any discussion of receiving the lampshade as a donation.

What decency ought to preclude in any case is turning this macabre relic into material — which is exactly what Jacobson does in this book. Hence, the “detective story,” which is a publisher’s marketing trope for “let’s make this exciting and entertaining.” Simon & Schuster has something to answer for when it comes to the book’s cover, a pornographic photograph of the shade lighted from within wrapped in a barely transparent dust jacket that resembles a layer of skin. Bad taste doesn’t begin to describe the revulsion it evokes when you first hold it in your hands.

All that is shabby enough, but Jacobson makes things worse with a series of pseudo-hip authorial tics that trivialize his subject and turn the serious reader’s stomach. The book begins, for example, with the author and the lampshade in the Union City, N.J., rooms of a Dominican “spiritualist” — from the description she’s a Santería practitioner. She tells the author that the lampshade contains a human spirit who trusts Jacobson and wants to remain in his keeping because, “You’re the only one he has now.”

One is inclined to mutter, “oh, please” and pass on, but some chapters later, Jacobson has “named” the tragic object Ziggy and places it on his bed for further “spiritualist” ritual. At that point, any reader of decent sensibility is bound to feel exasperation hardening into cold anger.

Early on, Jacobson — acting on a suggestion from a New York police source — seeks out Shiya Ribowsky, an experienced forensic investigator with the city’s medical examiner, who also happens to be a cantor. They meet in the social hall of a shul where Ribowsky has been leading Kaddish, Judaism’s prayer of mourning. The cantor lifts the lampshade from the box in which Jacobson has transported it:

” ‘It’s parchment, that’s for sure.’ Shiya has handled a lot of parchment in his life, parchment inside tefillin, mezuzahs and the Torah. The lampshade reminded him of all that. ‘But it is thinner, much thinner.’ He held the lampshade closer to his face and turned it around again. Then he took a deep breath and sat heavily into a chair, placing the lampshade on the table in front of him.

“‘This is the saddest thing I’ve ever seen in my life,’ he said.”

Would that the author had felt the same — and taken it to heart.