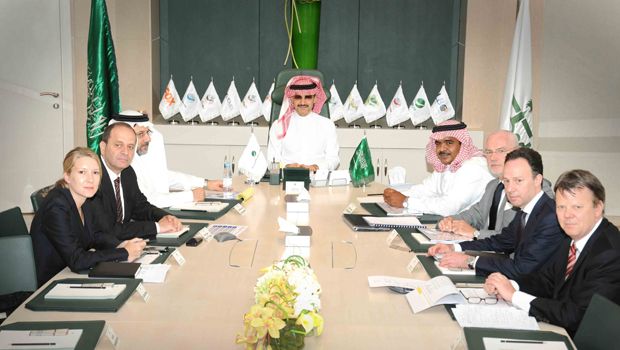 Prince Alwaleed heads a board of directors meeting attended by News Corporation executives. (AN photo)

The meeting focused on the latest developments at Rotana and News Corporation, and ways to further strengthen the strategic corporate alliance between Rotana and News Corp. Alwaleed holds a strong presence in the media industry throughout the Arab world. Rotana Group recently won the third FM radio license bid in the Kingdom at a cost of SR67 million.

The meeting, which was attended by Dr Waleed Arab Hashem, vice chairman and Fahad Alsukait, CEO, discussed ways to strengthen the strategic alliance with News Corp.

According to a company statement, Newscorp bought a 9.09 per cent stake in Rotana Group in February to further develop its postion in the media sector in the Middle East and expand it horizon.

Under the terms of the agreement, Rotana said the News Corporation would acquire newly-issued shares in Rotana for $70 million. News Corp has an option to boost its stake to 18.18 per cent in the 18 months following completion.

Prince Alwaleed has a strong presence and influence in media through his investments in media and entertainment in the Arab world, and beyond like the Saudi Research and Marketing Group (SRMG), News Corporation and Rotana Holding, said a company statement.

Within a short period, Rotana has become the owner of the largest Arabic film library and Arabic music archive, it added.

Rotana distributes, produces, and manages many of the most popular Arab artists in the region and also owns a bouquet of leading channels and employs over 1,300 employees located across the Middle East.

In addition, Prince Alwaleed recently annouced the launch of a new news channel to be headed by Jamal Khashoggi.

Kingdom Holding Company, the principal shareholder of the Rotana Group, is owner of approximately 7 percent of News Corporation’s Class B Common Stock. It has a 29.9 per cent share of the SRMG.