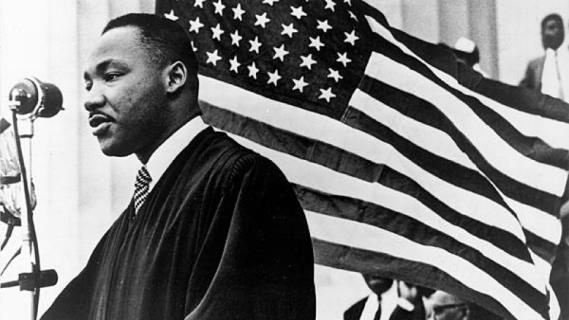 Is it possible that we have to thank the white Southern press of the 1960s – even the segregationist press – for its restraint in resisting FBI attempts to smear the Rev. Martin Luther King, Jr., with sexual scandal? That question is raised, but not sufficiently developed, in a Nov. 11 New York Times piece written by Yale historian Beverly Gage. She discovered in the files of FBI chief J. Edgar Hoover an uncensored draft of what has been called the “suicide letter.”  The letter was part of an elaborate effort to discredit King, who was about to receive the Nobel Peace Prize.

Based on wire taps and audio tapes, the one-page letter, supposedly sent by an outraged black citizen, described in the vivid language of the day examples of King’s marital infidelities and sexual adventures.  The writer, actually an FBI agent, threatened to go public in 34 days with details of King’s affairs.  “There is only one thing left for you to do,” it read near the end.  “You know what it is.”

The letter is considered one of the low points in the history of the FBI.  Tapping phones and bugging hotel rooms, Hoover became outraged at what he considered to be King’s moral hypocrisy.  “FBI officials began to peddle information about King’s hotel-room activities to friendly members of press,” wrote Gage, “hoping to discredit the civil rights leader.  To their astonishment the story went nowhere.”

We might expect that the FBI could have found some editor at some paper in the South – especially one with segregationist leanings – to try to expose King’s moral failings.  “Today,” wrote Gage, “it is almost impossible to imagine the press refusing a juicy story.  To a scandal-hungry media, the bedroom practices of our public officials and moral leaders are usually fair game…. Faced with today’s political environment, perhaps King would have made different decisions in his personal affairs.  Perhaps, though, he never would have had the chance to emerge as the public leader he ultimately became.”

The best inside look at how the Southern press restrained itself – and why — is offered by the late Eugene Patterson, who was editor of the Atlanta Constitutionfrom 1960-1968.  Patterson would become editor of the St. Petersburg Timesand a powerful force in the creation of what is now the Poynter Institute. He hired me to become one of America’s first newspaper writing coaches. On May 1, 1965, Eugene Patterson and Dr. Martin Luther King Jr., appeared together on a panel at “Law Day U.S.A.” at the University of Pennsylvania. Patterson was the moderator. (Poynter Photo)

When I arrived in St. Pete in 1977, Howell Raines was political editor of the Times, an immensely gifted reporter and writer who would one day become editor of the New York Times.  That same year he would publish a comprehensive oral history of the civil rights movement titled My Soul Is Rested.

It is in that book that Patterson describes to Raines how he was approached by the FBI to smear King, a deeply troubling narrative, not just about the nightmare of American apartheid, but about the dangers of intelligence agencies that pry into the private life of its citizens.

“An FBI agent was sent to see me with the bugging information that Dr. King had been engaged in extramarital sexual affairs.  The FBI agent, obviously under orders of the director, Hoover, because nobody acted without his direction, urged me – he said, ‘Gene,…here you on this paper have raised Dr. King up to be some kind of model American, some kind of saint, some kind of moralist.’  He said, ‘Now, here’s the information, and why don’t you print it?’  The FBI, the secret police of this country! And I had to explain to him, ‘Look, we’re not a peephole journal.  We don’t print this kind of stuff on any man.  And we’re not going to do it on Dr. King.’  And I said, ‘Furthermore, I’m shocked that you would be spying on an American citizen, whether it’s Dr. King or some other person because if it can happen to him, it can happen to all of us.’ And I asked him if he thought this wasn’t a misuse of the FBI. But he was highly offended at me, seeing us as an immoral newspaper for not printing back-alley gossip that the secret police of the United States were trying to ruin this man with.”

That agent had provided Patterson with the name of a Florida airport where King and a woman would be leaving, perhaps for the Caribbean, for a sexual affair.  He encouraged Patterson to send a reporter and photographer to catch King in the act: “Get a picture of this as well as a story on this man and expose him to the South and to the world.”

Patterson replied:  “Well that’s dangerous stuff, and it’s not our kind of journalism.” Undeterred, the FBI sent the agent back a second time, and once again, Patterson showed him the door.  By that time both Patterson and his mentor Ralph McGill were known for their progressive positions on racial justice in the South, and might have been expected to fend off J. Edgar Hoover and his minions. But Patterson revealed something deeper, and, I think, more inspiring about the response of the Southern press.

Patterson told Raines that one of the editors contacted by the FBI was Lou Harris of the Augusta (Ga.) Chronicle, a paper that supported segregation on its editorial pages.  Patterson recalls:

“So I had a phone call from Lou Harris one day, and he said, ‘Gene, I had a call from an FBI agent over here, and you’d be amazed at what he told me about Dr. King.’ And I said, ‘Lou, you mean sex exploits.’ …He said, ‘Have you heard about this?’ I said, ‘Yeah, the FBI has been to see me, too.’ And I said, ‘What are you gonna do with it?’ he said, ‘Hell, I wouldn’t print that stuff.  That’s beyond the pale.’ And this was a segregationist editor talking to me.  And I said, ‘Lou, I’m proud of you.  I’m not gonna mess with it either.’”

Patterson concludes, “I’m sure that story was spread to other Southern editors.  It’s a tribute to the press in the South, the segregationist press of that period that not one word of this ever came into print until after the death of Dr. King.  There were certain fences beyond which the press would not go in vilifying and damaging a man, and we didn’t do it to Dr. King.”

As I have thought about Patterson’s actions a half-century ago, I wondered why he didn’t do something to expose the reckless actions of the FBI.  Why not expose J. Edgar Hoover?  It occurred to me, of course, that such disclosure was a double-edged sword.  It could not be accomplished without evidence, and that evidence would include the smears against King.

But Patterson, it turns out, did take action, which he recounts in his interview with Raines.  One night, Patterson found himself on a plane to Atlanta with John Doar, one of Bobby Kennedy’s top aides in the Justice Department.  Hoover was a powerful man, but supposedly subject to the direction of the Attorney General.  “I want you to tell the attorney general about this,” said Patterson.  “He should know what the FBI is up to.”

“Because the more I thought about it,” Patterson said, “the more worried I’d become about the misuse of secret police powers.”  Patterson remembered that throughout his narrative, Doar never looked at him, staring straight ahead in stony silence.  “And all of a sudden,” said Patterson, “it hit me like a thunderclap that Bobby Kennedy knew about it.  I had made Doar very uncomfortable by relating it to him. Not one expression crossed that deadpan face of his.  He just did not respond.  It was like talking to a dead man.”

(Coincidently, Doar just died at the age of 92 on Nov. 11, the day Gage’s article on the “suicide letter” appeared in the Times.)

There are powerful lessons to be drawn from this story that involve race, politics, privacy, and power:

Previous Article
Son of Nazi Martin Bormann Accused of Sexually Abusing Young Boy While He was a Priest (Daily Mail, 2011)
Next Article
CNN: Forensic Assistant in Michael Brown Autopsy is a Fraud (but then so is Michael Baden) 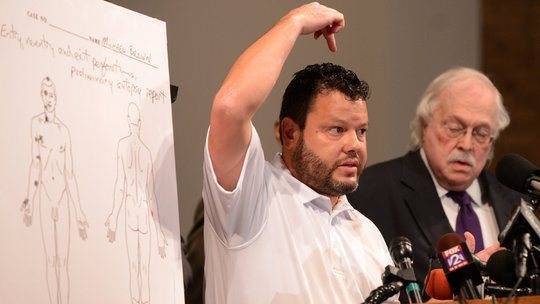 CNN: Forensic Assistant in Michael Brown Autopsy is a Fraud (but then so is Michael Baden)
Nov 27