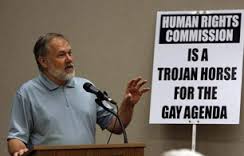 Scott Lively is again trying to avoid facing the music in the Crimes Against Humanity lawsuit brought against him by Sexual Minorities Uganda (SMUG). He has now filed to have the SMUG case suspended while he appeals Federal Judge Posner’s ruling against dismissal.

“1. Lively filed the Petition on December 5, 2013, requesting that the First Circuit issue a writ of mandamus directing this Court to vacate its Order Denying Lively’s Motion to Dismiss, and to dismiss this action for lack of jurisdiction and/or failure to state a claim.”

OBLOGDEE reported on the failed attempt to dismiss here.

It is interesting to note that Lively is now using the “as president of Abiding Truth Ministries” clearly an attempt to cast blame off of himself personally and onto a ‘corporation’. SMUG’s counsel, the Center for Constitutional Rights, is using the Alien Tort Statute to bring the American Scott Lively to trial in the U.S. for their Ugandan client.

The Supreme Court (SCOTUS) recently ruled against the use of the Alien Tort Statute (ATS) for a similar case involving a foreign client. But that ruling was based on the fact that there were not enough ties between any of the parties or the conduct to the United States. The Supreme Court did not actually rule on, but left hanging, the corporate liability question for Kiobel. In the SMUG case against Lively, though, the Federal judge has allowed the use of ATS much to the defendant’s dismay. Lively appears to be pretending to be a corporation undoubtedly hoping to apply some future Kiobel ruling for another dismissal attempt. Hey, if SCOTUS can rule “corporations are people” why not try for anti-gay hatemonger, I mean people, as corporation.

It is also interesting how desperate someone who claims such innocence is to keep the Center for Constitutional Rights from proceeding with the discovery phase and case schedule as set by the presiding judge last month.

The filing is here:

(Note the bragging above captured this morning has now been removed. #nowheretorun)