More outrage is building over prominent employees at Hanford blowing the whistle about how Bechtel has rushed the project in order to make a quick buck.  Despite decades of cleanup efforts and billions of taxpayer dollars spent, only a tiny fraction of Hanford’s radioactivity has been safely contained, and the situation appears to be getting more polarized if not hostile.

On December 20th, 2012, a police report was filed related to a December 19th meeting at an office building where DOE employees were involved in a disagreement about how much money should be paid to Bechtel National for sodium reduction work at the vitrification plant at Hanford where Bechtel holds a $12.2 billion contract to build a facility to treat up to 56 million gallons of radioactive waste left from the past production of plutonium from the nation’s nuclear weapons program.

The woman who filed the claim is an engineer for the Hanford Department of Energy Office of River Protection, reported that when she tried to leave the meeting she was physically restrained from walking out said Captain Mike Cobb of the Richland Police Department.

“The Department of Energy will not tolerate harassment, intimidation or other inappropriate behavior from its employees,” DOE said in a statement when asked about the police report. “Any and all allegations will be investigated promptly and thoroughly.”

However, DOE would not talk about the incident, describe what happened or name the people involved, saying it would be inappropriate to discuss a personnel matter. 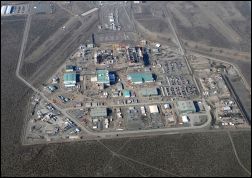 At the Hanford Nuclear Reservation in Washington State, where Bechtel is the clean-up contractor, the group was accused of 34 examples where design advice was factually incorrect, unsafe, or more costly than alternatives according to a leaked memo from the Department of Energy’s engineering director on the project. Gary Brunson said that Bechtel was “not competent to complete” its role working on a $12.3bn facility at America’s most contaminated nuclear site.

Senior scientists at the site have said that Bechtel’s designs for tanks and mixing equipment are technically flawed, and represent such a massive risk that work should be stopped on that part of the construction project.  Then, in August of 2012, workers detected a leak of highly radioactive waste from the double-shelled tanks in multiple locations.  One leak was so extensive it had created a “mound approximately 2 ft x 3 ft, and 8 inches deep.

The final costs for the Hanford cleanup process could exceed $120 billion, more than it cost to foot the bill for the International Space Station.

Bechtel and the United States government have long shared close ties, albeit they have also had many showdowns.  Today, most people have forgotten about the disastrous CANOL oil pipeline project, which consumed more oil than it produced and cost taxpayers a pretty penny at the same time.  So enormous were the losses, the project was later described as “more destructive to the war effort than any act of sabotage by an enemy,” in which Bechtel and other defense contractors were found to be profiteering off of the war efforts and other corrupt practices.

Bechtel immediately saw ways to capitalize on profits in the nuclear industry from the start, and quickly made moves to become one of the dominant companies in the field.  John McCone helped to give Bechtel its nuclear head start alongside the Atomic Energy Commission in pushing for nuclear power as a “clean and safe” source of energy.  In 1956, Bechtel landed the rights to construct the first nuclear power plant in the United States at Dresden, which was brought online in 1960.

After John McCone’s shares in Bechtel were bought out by the company, he started his career working for the Defense Department.  At his Senate confirmation hearing, General Accounting Office official Ralph Casey entered evidence that McCone and his associates had made a $44 million profit on a personal investment of S 100,000. “I daresay,” Casey testified, “that at no time in the history of American business, whether in wartime or in peace- time, have so few men made so much money with so little risk and all at the expense of the taxpayers, not only of this generation but of generations to come.”

In 1958, McCone became head of the Atomic Energy Commission.   Later he was also the appointed the Director of the CIA during the height of the Cold War after the Bay of Pigs Invasion and subsequent resignation of former CIA director Allen Dulles.

Between 1959 and 1978, Bechtel had been awarded a role as either engineer or builder at nearly half (68) of the nation’s commercial nuclear power plants.  By 1963, the company had begun construction at the San Onofre Nuclear Generating Station, but in 1977 was thoroughly embarrassed to admit that it had installed the nuclear reactor backwards.

In 1974, the company was sued by the Consumers Power in Michigan after the Palisades plant broke down shortly after being brought online due to steam generator corrosion issues.  The Directors of the Consumers Power claimed that Bechtel “had not fulfilled its duty and obligation to warn the company about potential operating problems and to prevent errors in design and manufacture of equipment and components.”

In 1988, while Saddam Hussein was being ostracized internationally for the use of poisonous gas on Kurds in the Middle East, Bechtel signed a contract with Iraq to build a chemical plant for them, but was forced to drop the project due to the Gulf War twenty four months later.

The company’s bad reputation extends far beyond the American borders, just ask people in Bolivia the effect of hiring Bechtel to privatize the water supply in Cochabama, the nation’s third largest city in the late 90s.  They were surprised to find out that even the collection of rainwater in the city was made illegal as part of the privatization contract.

After the Fukushima Nuclear Disaster, Bechtel was contracted by the United States government to send emergency water pump cranes to the crippled nuclear power plant in an attempt to keep the reactors from melting down, but due to a bizarre situation where the cost of the equipment of $750,000 suddenly rose to $9.6 million dollars this action was delayed for weeks.  This caused the USAID to look for other resources, which they received from the DoD, but only for one water pumping system, which did not even get dispatched to Japan until March 21st.  By the 26th, over two full weeks after the earthquake and tsunami, the SDF was still training off-site on the Bechtel pumping system, but it was too late as explosions had already ripped through the buildings after the nuclear fuel overheated and melted.

Through the years, Bechtel’s operations have been accused of being poorly managed, plagued by inaccurate accounting and cleanup of waste, and sustained by a long history of profiteering.  Most Americans may not realize the heavy investment that Bechtel has made to the development of nuclear technologies, and the strong relationship between the largest construction and engineering company in the United States and the nuclear industry.  When asked what Bechtel’s most historic moment was, the average Jeopardy contestant might refer to the Hoover Dam, but only because Bechtel doesn’t promote their historical failures too loudly.  That, and the fact that Bechtel employees are sworn to secrecy, both when the company hires them, and when they retire.

One cannot speculate that the Fukushima disaster could’ve been averted or lessened in any way, had there not been such a delay in getting the Bechtel equipment to the crippled nuclear power plant faster, and one also cannot guess the current status of the nuclear waste being stored at Hanford and its safety, but it is evident that the fixation upon the exercise of the privilege of pursuing their own self-interest has allowed them to fall prey to some of the most powerful of human instincts, none of which are enviable.

In 1982, Alexander Taylor writing for Time Magazine, described Bechtel as, “one of the true anomalies of American business, a globe-girdling behemoth that operates throughout the U.S. and 20 foreign countries, but a company so private and unobtrusive in its ways that most people have never even heard of it.”

Thus it seems that we will see a continuation of this industrial war.  What function does it serve?  What effect will it have upon our children to be taught that each individual or group has the right to whatever they can get and denies any principle which determines what they ought to get.  The very spirit of freedom is crushed by a doctrine which allows unlimited rights to exploit economic opportunities as much as they please.  Even worse, if men recognize no law superior to their desires, the pursuit of those desires should make life most unbearable for all those around them.  This was once the very function of our now degrading modern society, to provide the foundation and structure without which we would not be who we are today, and when removed from would give free way to all of these wrongs and more.

I am reminded of the words of Henry David Thoreau, “When friction comes to have its machine, and oppression and robbery are organized, I say, let us not have such a machine any longer.

When the organization is the sole center of its own complex universe, and the social obligations which once prevented it from unscrupulous greed have all fallen away, men do not become more forthcoming or wise or experienced, all of which require the acceptance of limitations, rather they dedicate themselves to the cultivation of profits, destroying the moral restraints which should limit the pursuit of wealth, and leave their obligations for someone else.